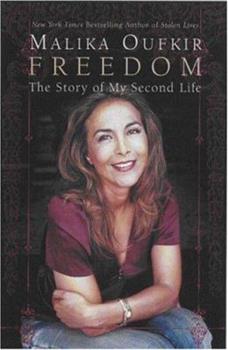 Freedom: The Story of My Second Life

The critically acclaimed sequel to the international bestseller, Stolen Lives. Oufkir's story of her years during, and after, her 24 -year incarceration in a Moroccan prison raises painful and political questions. Above all it is a tale of deprivation and survival in their rawest forms. Never self-congratulatory, the life lessons she imparts with candour might be forgettable, were they not so hard-won.

Published by Thriftbooks.com User , 13 years ago
Great follow-up to "Stolen Lives." The difficulty of her return from prison to freedom is beautifully described. Fortuately for her, she comes from a well-known family and she moves not to a regular life, but more a life of privilege. The road blocks, fears, joys, the return to a life 20 years later, no one could have described them better that Malika Oufkir.

Is It Natural To Live With Freedom?

Published by Thriftbooks.com User , 14 years ago
Note: The voice in FREEDOM is different than that in STOLEN LIVES because only Oufkir wrote this book, whereas two other authors contributed to STOLEN LIVES. In the memoir FREEDOM: THE STORY OF MY SECOND LIFE (a sequel to STOLEN LIVES) author Malika Oufkir describes relearning how to live as a free person. She was 19 when she, her mother, and her brothers and sisters were confined to a Moroccan prison. Before that she was adopted by the king and basically locked up in the king's court. She was 39 when she escaped; she later moved to Paris, France. She talks about her fear, present even after she's safe: "Even though I am now far from my jailers, shielded by the media [the media learned about her family's imprisonment then spread the word], I'm afraid everything could collapse around me in instant. What exactly am I afraid of? I don't even know myself. Certain terrors are so deeply rooted that they defy all logic. Even now, I sometimes wake up in the middle of the night, in those eerie hours when you can't quite tell whether you are awake or still dreaming, and I think I hear footsteps out in the hall... the apartment door opens and out of nowhere my jailers come to get me for crimes I haven't yet committed. Perhaps innocence begets its own guilt, planting suspicion both in oneself and in the eyes of others. That fear of being punished for things I haven't done, or haven't done yet, intensifies the hellish whirlwind of doubt. Like a battered child, I throw my arms up over my face, warding off blows and caresses, in order not to see what awaits me...." Freedom isn't the gift she expects it to be; she is often confused about how to manage aspects it, particularly time: "Most free people are painfully dependent on their watches and alarm clocks, an almost physical addiction that makes them cling to each second as if were their last. I have all the time in the world." She contrasts free people's perceptions with her own: "I had to relearn everything. I had trouble with the notion of time, not knowing when I had to hurry and when I had time to spare, not understanding the imperatives of schedules." Oufkir describes her struggles to figure out what a motion sensor sink is or how to operate an ATM--things people in Paris have probably used for more than 15 years--which is about the same as you or me trying to use laundry facilities in a foreign country when all the directions are written in a language we don't understand; this only beomes humorous later. These struggles are listed to illustrate what it means to straddle the gap between "what was" and "what is."(The German film "Good Bye, Lenin!" offers a funny take on this concept; the characters go to great lengths to keep someone from seeing "what is.") FREEDOM's strength is Oufkir's focus on the small things that make up, for her, freedom. It's beautifully written and translated from French. Read FREEDOM first, then go back and read STOLEN LIVES. FREEDOM raises questions that are, to this rea

A victim no more but a writer acquiring her own voice

Published by Thriftbooks.com User , 15 years ago
As one reviewer has commented, this book does not recount a "story" in the sense that one might expect from the word. If Malika Oufkir's first book, "Stolen Lives," was mostly a chronological account of "facts" (as co-author Michèle Fitoussi required), "Freedom" is the retelling of an inward and intimate journey, from victimhood to the strenuous apprenticeship of a self in the "normal" world beyond prison. Although Malika Oufkir's humor, wit, and genuine warmth shine through this book, her account is not necessarily meant to be a heartwarming or comforting "story," it is the witnessing of another kind of struggle than the one we read in 2001, as the author makes her often painful and occasionally joyful way toward a renewed self. The publication of "La Prisonnière" in 1999, and subsequently of its English translation in 2001, thrust Malika Oufkir into stardom. This proved to be a mixed blessing since the media tended to package her in the confining role of a "victim," a role designed to elicit compassion and sympathy. At one point, she recounts in "Freedom", she "felt like a strange creature being exhibited for the civilized white man" (p. 217). In her second book, she attempts to free herself from this role, as she repeatedly asserts. We have to take such declarations seriously. This is a woman who managed to survive extreme adversity in great part through her ability to imagine another life and to create fictional characters or settings through which she could momentarily forget her circumstances. Now she is dipping into this pool of creativity in order to become the writer that she potentially was in prison. "Listening" to her voice, which rings with authenticity in the French original (a quality that no translation, not even a good one as in this case, can fully convey), I sense that Malika Oufkir is acquiring her own, distinct personality as a writer. Rather than living in her imagination with no product to show for such intense inner activity, she has found writing as a critical means of discovering her identity, beyond that of victim and prisoner, and of constructing herself. It is of course significant that this book represents her first achievement as a writer on her own. If at times Malika Oufkir appears to judge the "free world" in severe or condescending terms, she hardly spares herself either. Apart from a gentle form of revenge against this world for having ignored her family while they were in prison, there is great honesty in her account. Naturally drawn to the homeless in Paris and to their "desperate" way of grasping the world, for instance, she then measures her own limits when attempting to help people in distress, and she goes so far as to accuse herself of cowardice. She is aware of her own contradictions as well, even blaming herself for having participated (however indirectly) in the tyranny that plagued Morocco, her country of birth, under King Hassan II. At no time does Malika Oufkir claim to give an entirely objective

Published by Thriftbooks.com User , 15 years ago
This was a good book but I felt I should have read "Stolen Lives" first as there seemed to be some gaps for me. I enjoyed Malika Oufkir's story, but wish there was more detail. I really wanted to know more about her struggle to live her life after so many years of not having that choice. More follow up on her family that went thru the 20 year imprisonment with her. The chapters are easy to read, but just wanted more length and detail.But I do recommend this book. You do feel for the author and this is her story. It's brave of her to share.
Trustpilot
Copyright © 2022 Thriftbooks.com Terms of Use | Privacy Policy | Do Not Sell My Personal Information | Accessibility Statement
ThriftBooks® and the ThriftBooks® logo are registered trademarks of Thrift Books Global, LLC