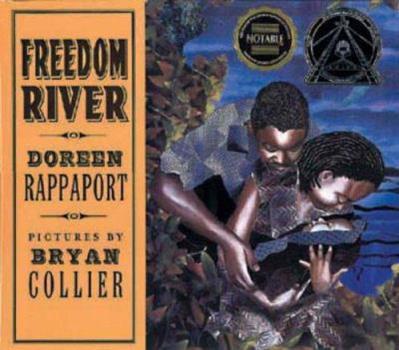 'Freedom River' is based on the true story of one man's determination to help an African American family escape from slavery along the legendary Underground Railway.

Published by Thriftbooks.com User , 19 years ago
Doreen Rapport Freedom River; Illustration by Bryan Collier14pp. ISBN 0-7868-0350-9.-ISBN 0-7868-1229-X (pbk.).-ISBN 0-7868-229-0 (lib.bdg.)(Intermediate)Freedom River is a true story, about getting from Kentucky to the free state Ohio. John Parker a former slave, and now a businessman of Ripely Ohio. John then helps a couple and their child escape being slaves to freedom. The freeing of these salves is taken place through out the year. Both the author and the illustrator work wonderfully together to make this book seem real. The text clearly goes along with the pictures. The illustration is remarkable, the pictures look like photographs. Bryan Collier uses a different technique for his illustrations, it looks as if the pictures are pieces of a puzzle arranged together. As you begin to read this book look closely at the faces of the people, you will see wavy lines, these lines represent the Ohio River. The color schemes really put things in perspective also, they are realistic colors. Through out this book, Doreen Rapport uses short phrases to describe the event that is taking place: Run. Run, Row. Row, Listen. Listen, Wait. Wait, Closer. Louder, Crawl. Crawl. This gives the reader insight to what is going on in the picture by just two word phrases. Another author that does this same technique is Under the Quilt of Night by Deborah Hopkinson. The ending of this story is really surprising, I but when thought about it makes sense. This book is just not about the freeing of slaves, but it is about doing what is right in life, helping others out. I recommend this book to adults and children in the intermediate level. An interesting addition to the end of the story is a historical note which explains in great detail about the life of John Parker.

Worthy of a rating of more than 5 stars

Published by Thriftbooks.com User , 20 years ago
In the book, A Freedom River, the writing of Doreen Rappaport along with the illustrations of Bryan Collier together create a stunning retelling of one particular trip on the Underground Railroad. This is the story of a slave family escaping from the slave state of Kentucky to the free state of Ohio. The book's uniqueness lies not in its topic, but rather in the characters. John Parker, this true story's hero, was not only a conductor on the Underground Railroad, but also an accomplished businessman from Ripley, Ohio. He was born a slave and worked to buy his freedom. He owned his own foundry, and employed both black and white individuals from both Ohio and Kentucky. He helped to make this book unique because he is not a well known conductor, but his impact on the Underground Railroad was just as great. It is said that he helped over 900 slaves escape to freedom during his lifetime. A Freedom River draws the reader into the experience of the Underground Railroad. It masterfully pulls forth every imaginable emotion, as the characters must make choices that may end in the separation of families, death or freedom. The pace of the book along with large, bold directives, such as RUN, CRAWL, and LISTEN, create a feeling of breathlessness, much as if the reader too, were running for freedom. The illustrations work hand in hand with the written word in order to create the overall experience of the book. The multi-textured collages with realistic faces add emotion and dept to the story. Wavy lives found throughout the illustrations deeply symbolize the river and its importance in the search for freedom. This is a beautiful book and worthy of a rating of more than five stars. It could be successfully used with children from 1st to 6th grade. It is an excellent book for introducing and further understanding the Underground Railroad.

Published by Thriftbooks.com User , 21 years ago
Before the Civil War, Kentucky was a slave state. But just 1000 feet across the Ohio River, Ohio was a free state. John Parker, was as a conductor on the Underground Railroad and helped hundreds of slaves cross that river to freedom. John was a unique individual, an ex-slave who learned to read and write and was able to buy his freedom and a successful Ohio businessman who employed both black and white workers. But he never forgot his slave roots and the terrible pain of being separated from his mother and sold when he was eight years old. Because of this, he risked and devoted his own life to helping slaves escape to safety in Ohio. Freedom River tells the story of one of John Parker's trips to Kentucky to rescue a family of three..... Doreen Rappaport has written a powerful and inspiring story of the courage and determination of one man to right the wrongs of slavery. Her eloquent text makes John Parker and this story come alive and is complimented by Bryan Collier's vivid illustrations that add a real sense of drama and urgency. Perfect for children 8-12, Freedom River is a wonderful introduction to the Underground Railroad and includes historical notes to enhance the story and augment discussion.

Published by Thriftbooks.com User , 21 years ago
There are many retellings of those who risked their lives to free slaves, but this is surely one of the best. Parker would certainly be proud to have his story told with such fluid, yet vivid, text. Collier's illustrations are poignant, and his explanation of the symbolism he depicts adds an extra layer of richness to this treasure. This book is so much more than a biography. Enjoy it with the special children in your lives.

A wonderful, true story about the underground railroad.

Published by Thriftbooks.com User , 21 years ago
Doreen Rappaport writes about John Parker, a former slave who bought his own freedom and then risked his life to help other slaves escape. This story is a true one about Parker's rescue of one family from the slave holding state of Kentucky to the freedom across the Ohio River in Ripley, Ohio, where Parker's home is now an historic site. Rappaport's book is written for children, and she uses capital letters, bold print, and repetition to emphasize the danger of Parker's exploits. The illustrations are by Bryan Collier, and they are collage combined with watercolor. The illustrations are simply fabulous.
Trustpilot
Copyright © 2022 Thriftbooks.com Terms of Use | Privacy Policy | Do Not Sell My Personal Information | Accessibility Statement
ThriftBooks® and the ThriftBooks® logo are registered trademarks of Thrift Books Global, LLC