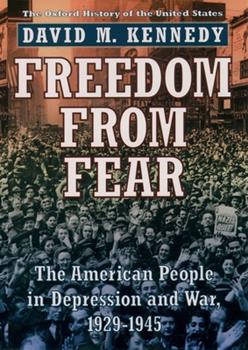 Freedom from Fear: The American People in Depression and War, 1929-1945

(Book #9 in the Oxford History of the United States Series)

Between 1929 and 1945, two great travails were visited upon the American people: the Great Depression and World War II. This book tells the story of how Americans endured, and eventually prevailed, in the face of those unprecedented calamities. The Depression was both a disaster and an opportunity. As David Kennedy vividly demonstrates, the economic crisis of the 1930s was far more than a simple reaction to the alleged excesses of the 1920s. For more...

There are books that are like a seed tree leading to other books . This book book is one !

Published by F.w. Selstrom , 1 year ago
It's a thick , heavy book about a thick heavy subject . My interest started because of fools wearing red hats . Instead of just being angry my reaction was " so when was it great ! " . I have to admit I already knew the answer . I was born when it was at it's peak . Don't be intimidated , just open it anywhere and start . Compare it to now (Jan 2021 ) or for that matter every president since 1945 . Especially if you wear a red hat . This isn't just what happened but why it happened . Every president should have a copy chained to his nightstand . I have two , one is a back up in new condition . The other dog eared , written in , full of post-it notes .

A Masterwork by a Master Historian

Published by Thriftbooks.com User , 20 years ago
It is not often that one has the privilege of reading a historical masterpiece. David M. Kennedy's Freedom From Fear affords us that rare opportunity. This is one of those unique histories which transcends its genre, becoming at once art and literature behind the unseen hand of the master storyteller. The very attempt to write of America in the transformative years 1929-1945 would daunt the greatest writers. The wonder of this achievement is that it so elegantly and lucidly tells the story, with such apparent ease, of two great wars -- the Great Depression and World War II. Most importantly Kennedy throughout maintains his ultimate perspective - the American people, the highest and the most 'ordinary', shown against the backdrop of enormously complex domestic and international events. If you want to learn (and teach, as I do) about this period of enormous upheaval in 20th century America, this is the book. To the specifics. Kennedy in his prologue places the major players in their respective, middling stations on November 11, 1918: Lance Corporal Hitler in hospital; munitions minister Churchill staring at Big Ben chiming 11:00; commissar Stalin "dealing" with counterrevolutionaries; Assistant Secretary of the Navy Roosevelt awakening to a riotous din of celebration. Kennedy tells us Hoover's official theory of the Depression: "The primary cause of the Great Depression was the war of 1914-1918." But Kennedy wisely notes that the Depression was sui generis, "thus far [resisting] comprehensive explanation". Then in a lightning succession of almost breathtaking chapters, Kennedy gives us just that. He leads us through the fateful years with exhaustive unobtrusive scholarship, tinged at times with irony, mostly tempered with empathy. One cannot read this book and not feel a reverence for this land and its people, as the author undoubtedly intended.Though the facts pour forth furiously, we glide through them, rendered as they are into good old plain English. As we progress through each chapter, the suspense builds unfailingly toward a dramatic, sometimes breathless, climax. This is a whale of a page-turner. Thus, for example, "an epidemic of failures flashed through the banking system" and the "suspension of the Bank of the United States represented the largest bank failure in American history...[holding] the savings of some 400,000 persons." Then at the end of the chapter, "Panic": "In short order, what was still in 1931 called the depression was about to become the unprecedented calamity known to history as the Great Depression." Hoover, in 1928 "the most competent man in America, maybe in the world", did everything wrong. FDR, "master reconciler" coined the simple phrase that would give a name to an era, "I pledge you, I pledge myself, to a new deal for the American people." Nobody knew what it meant. More apt, perhaps, was his exhortation to "above all, try something." Thus, the hundred days of furious activity in the capital, while the nation cont

A Magisterial & Authoratative Look At The Crisis Years!

Published by Thriftbooks.com User , 21 years ago
With this wonderful book, David Kennedy has produced a definitive treatment of the crisis of the century, a book of epic proportions; one detailing, describing and explaining the many ways in which the insoluble social, economic, and political maelstrom that enveloped this country is related to the history of what came thereafter. As in other recent tomes such as Doris Kearns Goodwin's "No Ordinary Times" and Tom Brokow's The Greatest Generation", the present volume is quite explicit in meaningfully linking how the harrowing kinds of experiences, trials, and tribulations of the American people helped to forge the kind of character, determination, and resolve that was later so instrumental in meeting the challenges associated with the Second World War. Yet unlike Brokow's effort and that of other historians like Stephen Ambrose, Kennedy avoids wide use of primary interviewing, and the difference this leads to in the tone and perspective of the book is telling. Like Goodwin's effort, this is a superb book, wonderfully written, eminently accessible (an important quality given its length of nearly 900 pages), with a sometimes soaring prose style that is so distinctive and so refreshing that reading it is a joy. This is history come to life, full of the color and hues of the original events, presented in a manner that is at once both academically sophisticated and yet available and readable by the general audience. Kennedy makes the reader feel as though he is present in the moment, experiencing the events as they transpire rather than eavesdropping some seventy or so years after the fact. Hearing about the ways in which feckless Herbert Hoover, for example, was in many ways the helpless victim of circumstances is quite interesting. So is his take on so many other personalities and issues of the time, from the particulars of the New Deal and how they were conceived all the way to the insidious domestic treatment and 'internment' of Japanese Americans after the outbreak of WWII. Of course, Kennedy's book is rife with interesting and often provocative interpretations of the events, and this willingness to weigh in intelligently and convincingly adds to the overall entertainment and intellectual value of the book. While I didn't necessarily agree with all of these interpretations or his conclusions, it is always a pleasure to be in the presence of such an active, nimble and creative intellect. This is a book that anyone with an interest in the literally endless ways we were formed in the crucible of events of the past as well as by the people who came before us will want to experience this absolutely top-shelf new work by David Kennedy. Enjoy!

Published by Thriftbooks.com User , 22 years ago
As a former student of Professor Kennedy's at Stanford, I confess bias. Nevertheless, David illuminates America's past like no other historian, contemporary or past. He has a unique talent for captivating readers, setting the stage and making the reader feel they are at ringside. We often forget the ordeal and emotion of the Great Depression and World War II, the Fireside Chats, Pearl Harbor, D-Day, Roosevelt and Hiroshima. Kennedy has painstakingly researched this book, inserting commentaries from those who made history plus his own penetrating insights. You will find balance and fairness here, not partisan rhetoric or pedantry. Hoover was in many respects ahead of his time (although some accuse Kennedy wrongfully of a Stanford bias), McArthur knew how to stroke the PR machinery, Roosevelt was a shrewd politician, Churchill was a master manipulator, Stalin a man whose patience ran thin waiting for a promised Second Front. Other great portraits include John L. Lewis, Huey Long, Father Coughlin, General Patton ... what a great read! Buy this book!

Prof. Kennedy is a great writer! Wish he was my hist. prof.

Published by Thriftbooks.com User , 22 years ago
I loved this book because he writes the way I wish more history books were written--which is a book full of facts based on meticulous research, yet the writer not being afraid to make his own judgement about events(particularly policies of the New Deal by FDR). I figure I am paying for the wealth of knowledge and opinion of Prof. Kennedy. As far as opinion, it seems very objective and impartial. Although I detected sympathies. I greatly enjoyed the first part on the New Deal and the way the writer incorporates the human equation of individuals with the policies on a larger government scale. This made is very enthralling and easy to read. It was almost like a historical novel. I think it takes a very self confident history professor to write like that. The second part on WWII was a good general overview. As a student of WWII history, I felt Prof. Kennedy could have incoporated more humaness to it like he did during the first part of the book. One aspect I enjoyed was his focus on the aerial war(combined bomber offensive) as it was woven in nicely with the grand scheme of US involvement in the European Theater of Operation(ETO). Most books focus on separately on only the land war or air war.
Trustpilot
Copyright © 2022 Thriftbooks.com Terms of Use | Privacy Policy | Do Not Sell My Personal Information | Accessibility Statement
ThriftBooks® and the ThriftBooks® logo are registered trademarks of Thrift Books Global, LLC