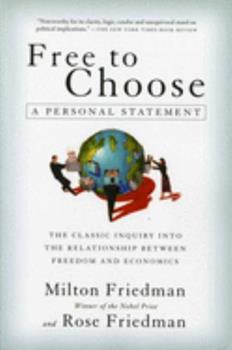 Free to Choose: A Personal Statement

The international bestseller on the extent to which personal freedom has been eroded by government regulations and agencies while personal prosperity has been undermined by government spending and economic controls. New Foreword by the Authors; Index.

Published by Thriftbooks.com User , 13 years ago
"Economic freedom is an essential requisite for political freedom". That quote from Milton and Rose Friedman is the essential reason why "Free To Choose" should be required reading for all Americans in high school! This book makes a powerful and persuasive argument in favor of a free market economy. Written in a very lucid style "Free To Choose" makes the usually dry subject of economics easily understandable and a pleasure to read. The "Power Of The Market" chapter shows how free markets work and why they are essential for human freedom. "Tyranny Of Control" chapter explains why trade restrictions and subsidies backfire. The "Freedom And Prosperity" chapter examines what the dramatic experience in Eastern Europe reveals about bureaucrats and markets. The "Created Equal" chapter shows how markets promote justice. Simply said, this book tackles economic issues that are as timely today as they were when the Friedman's wrote about them in 1979. As a retired Army officer and student of political philosophy, I found "Free To Choose" a great book for anyone who wants to understand basic economic theory.

Good introduction to the ideas of the free market

Published by Thriftbooks.com User , 19 years ago
Note: This book deserves a little less than 5 stars, but since there aren't such levels of fine-tuning, I am giving it 5 stars.Milton Friedman's FREE TO CHOOSE: A PERSONAL STATEMENT is the ultimate layman's synthesis of the ideas of economics developed at the University of Chicago in the past century. This system has had profound implications on our current model of the free market, as Friedman is just one of many in a line of Nobel-prize winning economists to come from that school. All the classical ideas of micro- and macroeconomics are presented in an accessible and effective fashion in this book. If you don't understand why the free market works, or are hesitant to undertake a more rigorous approach in learning about capitalism, FREE TO CHOOSE is definitely for you. Friedman assumes very little previous knowledge about economics. His arguments depend only on an ability and willingness to think rationally about economics and everyday decision-making processes.However, this rational approach is also a downfall to FREE TO CHOOSE. Chicago-style economists love to use purely rational appeals in their writing, and Milton Friedman is no different. Some of his empirical evidence is unconvincing; as such, a few of his policy statements go against more current, empirically developed economic theories. His shoddy treatment of externalities and failures in the market (he dismisses some of them without sufficient cause) would make it seem that unfettered capitalism is a perfect system when it is not. Especially for those of you who don't have the tools to judge the validity of economic theories, be forewarned about this aspect of FREE TO CHOOSE.Overall, an excellently written, widely accessible book that is definitely worth purchasing if you are unfamiliar with the ideas of capitalism. If you have a solid understanding of economics, then none of the ideas will be new (and you will probably notice some of the same problems I did).

A Clear and Reasoned Defense of Liberty

Published by Thriftbooks.com User , 19 years ago
"Free to Choose" (1980) is a great companion to Friedman's ten hour video presentation by the same name that appeared on PBS in the early eighties to rave reviews and some of the highest ratings in PBS history. The video series was extremely well done and taken right from this book.Friedman explains how and why markets work, why minimum wage statutes hurt instead of help unskilled labor (they price entry level or "training positions" out of the market) and why the Great Depression happened (protectionist tariffs like Smoot-Hawley devastating trade between nations was the primary reason).Like Hayek and von Mises before him, Friedman explodes the Keynesian mythology that government spending is actually good for the economy. Moreover, this book is written for the layman. You don't need a PhD in economics or a Nobel Prize (both of which Professor Friedman has) to understand this work. It is clear, concise and cogently written.If you want to understand why the market is ineluctable, this is a must read...and if you get the chance, I highly recommend the companion video series - some of the best work done on explaining why the free market works and planned/controlled economies fail.It as timely today (despite the dated references) because the free market still works (it always will) and command/controlled economies always fail...this book tells why.

Surprisingly Current and Definitely On Point!

Published by Thriftbooks.com User , 20 years ago
Being Nobel winning economist, I was not sure what to expect from this "personal statement". What a pleasant surprise and enjoyable read. The book represents the Friedman's take on the government policies of the day (1979). Not knowing that the book was written over 20 years ago a reader would swear it just rolled off the press. The fact that the problems addressed by this book are still the problems we are (or more importantly are not truly) debating today only bolsters the arguments that current government policy is failing.As a not quite totally liberal or Libertarian (as modern socialist democrats (Ted Kennedy, Al Gore, Diane Feinstien, etc.) and moderate Republicans (Olympia Snowe, Lincoln Chaffee, James Jeffords, etc.) have co-opted the liberal and moderate monikers), Friedman puts forth arguments against government intervention is many areas, but does demonstrate where government can be helpful, in limited ways, to address various market failures. The book addresses areas such as free markets, price and wage controls (which are currently causing electricity shortages in California), equality and justice, education (Friedman has been urging parental choice in public schooling since the 1950s), consumer protection, worker protection and inflation. The book presents each issue by examining how we got to the current state, what is wrong with the current policy and how he believes the policy should be changed. In various instances, he suggest both his preferred change and a watered down version (pragmatic version) that might actually be enacted in our current political morass.A quick note to readers. One reviewer suggested that the book plagiarizes the work of Lord John Maynard Keynes. This could not be further from the truth. Friedman is a monetarist more in the vain derived from classical economics as presented by Adam Smith and used as a basis by the American Founders, especially Thomas Jefferson. The failed policies of the newer Keynesian economics (demand side economics) are at the heart of what Friedman is railing against: Government control. Also Monetarist are distinguished from the supply side theories of Robert Mundel and Art Laffer. In fact, the only Keynes quote I can recall from the book was used to demonstrated that even someone as wrong as Keynes knew that monetary inflation (printing too much money) was one of the worst mistakes a government can make. "There is no subtler, no surer means of overturning the existing basis of society than to debauch the currency. The process engages all the hidden forces of economic law on the side of destruction, and does it in a manner which not one man in a million is able to diagnose."

The reality of the marketplace

Published by Thriftbooks.com User , 21 years ago
As we head into the next millennium, it becomes increasingly clear the progress we've enjoyed is mainly attributable to the freedom of the marketplace. The Friedman's provide an incredibly readable and understandable defense of the marketplace. A believer in the free market will find this book a refreshing review of reality. However, uninitiated neophytes, who still cling to government solutions, will likely have to struggle to accept this book's seemingly contrarian positions. The effort is well worth it. When written, this book challenged conventional wisdom - today many of its propositions are conventional wisdom. How far we've come - thank you Milton and Rose Friedman.
Copyright © 2020 Thriftbooks.com Terms of Use | Privacy Policy | Do Not Sell My Personal Information | Accessibility Statement
ThriftBooks® and the ThriftBooks® logo are registered trademarks of Thrift Books Global, LLC