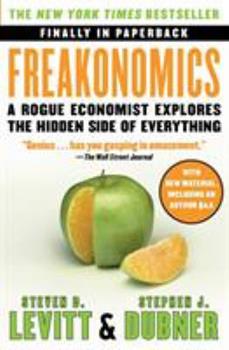 Freakonomics: A Rogue Economist Explores the Hidden Side of Everything

(Part of the Freakonomics Series)

Here's a first-year book that encourages critical thinking and sparks discussion. Freakonomics addresses current social questions that students will enjoy arguing about both in the classroom and over coffee in the student union: - Which is more dangerous--a gun or a swimming? - Why do drug dealers still live with their mothers?- What makes a perfect parent?These may not sound like typical questions an economist asks, but Levitt is not your typical...

Freakonomics will give you a new way to look at things.

Published by Flynt , 6 months ago
The book really shows that we might want to really ask more questions, and question the incentives of those around us before assuming their motivations. My only criticism really is that I'm not sure after seeing both the documentary of the same name and reading the book that there's much more to be gained from the book.

Published by KellyE , 2 years ago
Arrived quick, however I would not call the condition “very good.” Large coffee stains and weak pages. Much more like acceptable.

Published by Thriftbooks.com User , 5 years ago
At the age of 22, I've finally decided to read Freakonomics. I'm aware that it is required reading for many students — high school and college. I've also seen many people make reference to it on social media. Therefore, I was very interested in investigating the hype. Overall, this book is captivating and intelligent. Throughout the book Levitt uses the word "incentive" a lot which seems to be the core message of the book. Basically, exemplifying in various ways how slight corruption and selfishness is tied into everything. It makes you question things instead of taking things at face value. He exposes the fact that there's underlying meaning in everything, and in many cases, we're looking out for the best interest of our individual pursuits. Also, he uses some very bold examples (crime rates versus abortion, drug dealership, cheating teachers, etc) to make some very simple arguments. This is NOT boring book.

Challenge you views of the world and how it works

Published by Thriftbooks.com User , 12 years ago
If you like to think and see the world in different ways, get this or the revised and expanded edition. (Helps if you can read Spanish!)

This book will open your eyes!

Published by Thriftbooks.com User , 12 years ago
This book really helped to open my eyes about the way that people act and what motivates them; also how to change their motivation.

What you want out of a non-fiction book: Tons of interesting facts.

Published by Thriftbooks.com User , 16 years ago
If I could i'd give this a 4.5 stars. It would lost half a star for its sometimes annoying writing style. The style isn't bad, but it isn't great and the recurring rhetorical questions are pretty silly. I'd rather just see the facts and what he is discussing that endure boring comparisons to why school teachers are like sumo wrestlers or whatever (the answer is always something simple like "they cheat" or "they lie") My second minor quibble would be the title. Why not call this Freakstatistics? Virtually nothing discussed in this book falls into the realms of economics as normally defined. The book is a mixture of statistics and sociology. Stephen Levitt is a brillant guy and we dont' need to pin him down into the field of economics merely because he has a degree in it. His rational for discussing everything as economics is some general theme of "incentives," but that is too thin for me. Those two quibbles aside, this book is infinitely interesting and entertaining. Levitt is a genius at tackling problems from unexpected angles and then backing up his surprise theories with enough stats you have to believe him. Who would have thought the fall in crime was due to abortions? Few people, though upon hearing it and a brief explanation it makes total sense. That section and the section on the world of small time crack dealers were the most interestng, though I also highly enjoyed the chapter on black vs. white baby names. Highly recommended to anyone. Really, everyone would benefit from the info he imparts.

Amazing Book That Will Open Your Mind

Published by Thriftbooks.com User , 17 years ago
In the world of economics, Steve Levitt is a rock star. He's the hot ticket out there. His seminars are packed; students and other professors travel across world to study and work with him. He received tenure at the University of Chicago two years (!) after getting his Ph.D. He has already won the most prestigious prizes economics has to offer at age 37, he received tenure at the University and there is little doubt that one day, 20 or 30 years from now, he will win The Prize. He is just that good. Why? Like Gary Becker before him, he takes economics out of the realm of the stuffy and dry and boring and it applies to topics no one had ever thought about it applying it to before. He is a genius at making the data sing. His questions will challenge you, his answers may anger you, but you won't ever see the world the same way again. And his writing is completely accessible to non-economists. Some examples of the questions he asks: Did crime in the 1990s go down because there were more cops on the streets, we were betting winning the war on drugs, or because of Roe v. Wade? Just how profitable is it to be in drug gang versus working in McDonalds? And just what are the economic profits from dealing drugs? Is Sumo wrestling fixed? Does having your real-estate work on commission mean that he/she will work to make sure you will get the highest sales price out there? Does campaign spending determine the outcomes of elections? In all these questions, Levitt relishes in challenging common perceptions and "wisdom". And he gets his answers not through crazy complicated math but by the getting data to reveal its secrets to him in unique ways. If you like being intellectually challenged, if you want to see the world in a new way, if you want to read the writings of one of the most creative and sharpest minds alive today, then buy this book.

The Power of Data in a Master Economist's Hands

Published by Thriftbooks.com User , 17 years ago
Having myself survived the economics program at the University of Chicago as a young graduate student twenty years ago, I know how decidedly eccentric their laurelled scholars can be. One of the most prestigious of the current crop there, Steven D. Levitt, along with journalist Stephen J. Dubner, has written a most intriguing and mind-bending book that uses Chicago-style econometric approaches and applies those to social and political issues that otherwise seem mundane and have no apparent basis in coherent theory which would support the behavior under study. In fact, this book of compelling case studies bears similarities to the approach taken by author Malcolm Gladwell in his recent best-selling book, "The Tipping Point", where he takes primarily historical events and analyzes them almost anecdotally as exercises in human behavior, in his case, making connections and how ideas become trends not by gradual insinuation but by a singular dramatic moment. But Levitt's canvas is broader, his theories and findings are far more diverse, and his approach is far more quantitative in nature. For example, he challenges the perception that campaign spending determines elections. Levitt's analysis takes a fresh look by contrasting races in which the same two congressional candidates run repeatedly against each other. What he concludes is that a winning candidate can spend half as much as before and lose only one percent of the vote, while a losing candidate who doubles campaign spending picks up only one percent more. Basically they prove that no matter how much candidates spend on their campaigns, the results would not be marginally affected. In another example, the authors describe a seller's real estate agent, who lives on commission and has an incentive to sell a listed home for maximum dollar. Again, this is a misconception since the authors contend the small financial reward to an agent who sells a home for a few thousand more dollars is dwarfed by the greater money to be made by selling properties for less but quicker. Levitt's research into the sale of one hundred thousand Chicago homes found that agents keep their own homes on the market an average of ten days longer and sell them for more than three percent more than the homes they list and sell for clients. The penetrating analyses provided by Levitt appear to have no bounds as he identifies Chicago teachers, who were proven to be changing their students' test answers and ultimately fired for their actions; sumo wrestlers who were found to be cheating as well; and even the alternative and more lucrative career options that crack dealers may have at McDonald's versus making sales. He even questions the impact of a good first name in a person's later life and if children become more literate if their parents read to them. The conclusions surprised me as they will you. But the most compelling study he presents is related to the impact of Roe vs. Wade. In a study he conducted with Stanford law Prof
Trustpilot
Copyright © 2022 Thriftbooks.com Terms of Use | Privacy Policy | Do Not Sell or Share My Personal Information | Accessibility Statement
ThriftBooks® and the ThriftBooks® logo are registered trademarks of Thrift Books Global, LLC