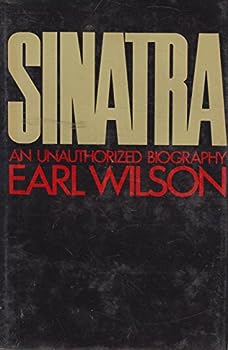 This description may be from another edition of this product. An unauthorized biography by Earl Wilson, published by Macmillan in 1976, contains 336 pages.

Published by Thriftbooks.com User , 15 years ago
This remains actually one of the finest biographies ever written about Sinatra, and shamefully obscure. Acknowledgement of every important facet of Sinatra's life and career is rare enough, and in-depth understandings of them are virtually nonexistant. But Earl Wilson comes among the closest for a totally even perspective. Arnold Shaw's superbly-written but slightly overrated book,''Sinatra-Twentieth Century Romantic,'' was written eight years before this and obviously influenced Wilson - a lot of things from Shaw's book are repeated in this - but it's certainly not the bland and witless regurgitation of Kitty Kelly trash found in 99% percent of the biographies written since 1986. Earl Wilson had plenty of material on his own, having been friendly with Sinatra during the Dorsey days, interviewed Ava and he as the one of only non-Sinatra-allergic reporters from 1949 to 1953, and even been exiled by him unexpectedly (something Wilson doesn't seem too veangeful about - for once). The book is affectionate and understanding, but not blind. A lot of the rather painful reviews that were in abundant supply in the early 70's are featured prominentely rather than ignored, the rumored temper tantrums are unflinchingly recounted, and all the faults and flops and weaknesses and torments that made Sinatra much more interesting as a man than the sugar-coated image floating about in Nancy Sinatra's books are gone into as well. This certainly has time-capsule value; it's always interesting to read the predictions made for Sinatra in the days long before they knew he'd perform until he was eighty and have the Empire State Building lit in blue on his birthday. In 1962 Sinatra ludicrously underestimated himself by saying his career would probably last only a few more years (try 40), and every year or so following that someone stubbornly repeated the sentiment. But overall this is an intelligent book, and the word ''genius'' in regard to Sinatra is tentatively put forth toward the end. Another trademark of the time is it's focus on some of the generally ignored events of the seventies - like several forgotten Sinatra-dates, a million-dollar ''gate'' at the Uris Theater, ect. Music - as in art - is basically not analyzed in this, but it has wonderful descriptions of his live performances. Wilson appears to be the only good biographer who truly understood the loveableness and charm of Frank Sinatra (something never mentioned in ''His Way'')- obviously because he was the only Sinatra-biographer who knew him. The ''warts'' of the singer's life are all covered, but the justifications and reasons for them are covered as well. Every bit of ''bad manners'' he was ever accused of can be so well-justified it becomes very debateable if ANY of the prosecution's accusations can hold water - an idea that horrifies Sinatra-haters but is just as possible as all the scandal sheets. Wilson had that rare quality common sense, and this book, very interested in gossip - hey,what c
Copyright © 2020 Thriftbooks.com Terms of Use | Privacy Policy | Do Not Sell My Personal Information | Accessibility Statement
ThriftBooks® and the ThriftBooks® logo are registered trademarks of Thrift Books Global, LLC