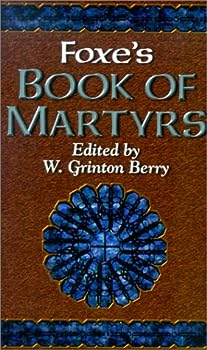 Would you suffer persecution, poverty, and prison for Christ? Would you endure cruel tortures that take your mind and body to the brink of death and beyond? Would you watch your children suffering for... This description may be from another edition of this product.

Published by Thriftbooks.com User , 3 years ago
A book that every Christian should have.

Foxe's Christian Martyrs of The World

Published by Thriftbooks.com User , 12 years ago
We have such a love for Missionaries. Foxe's Christian Martyrs is a great read. Also the DVD End of the Spear based on the book written about the exerience of 5 missionaries "Nate Saint (August 30, 1923 - January 8, 1956) in Ecuador who was killed while attempting to evangelize the Waodani people through efforts known as Operation Auca." A committed life lived for the Lord!

Published by Thriftbooks.com User , 15 years ago
Fox's "Book of Martyrs" is a must read for anyone wanting to read about the dark side of Christian history. This book gives the gory details of persecution and murder in different countries,by various authorities. The book details the deaths of the Disciples in the first part of the book. The martyrdoms detailed in this book go back to various Roman Emperors and following that of the Popes.The Inquisition is included.Persecutions of the Quakers and the Albigenses are listed also.Read how "Bloody Mary" earned her nickname. This book shows that religious differences of beliefs were not always tolerated or forgiven!

Published by Thriftbooks.com User , 16 years ago
This book should be read and reread -- loyalty to Jesus Christ and the Kingdom of Christ must be celebrated!

Must Reading For All Calling Themselves Christians

Published by Thriftbooks.com User , 20 years ago
If anyone ever had the idea that the Roman Catholic Church was a "Christian" organization, they obviously never studied the history of that "church" nor have they read this book. More than just a regrettable "episode" in the life of the "church", after reading Foxe's accounts of horrendous torture and suffering of those who refused to recant their belief of the truth in the word of God, you may consider yourself more than fortunate to live in a time and place were you can freely proclaim the truth to others. Many of the accounts of martyrs in this book, such as Master John Hooper who was "very slowly" burned to death, will leave an indelible impression on your mind for many days or weeks after you read the gruesome details of the his earthly demise. Another man, Charles Hadden Spurgeon, more eloquently put it this way; "The Inquisition was the masterpiece of infernal craft and malice, and its deeds were far more worthy of fiends than men. If the church of Rome could at this moment...become a pure community, ten thousand years of immaculate holiness and self-denying philanthropy could not avail to blot out the remembrance of the enormous crimes with which the Inquisition has loaded it. There is a deep and indelible sentence of damnation written upon the apostate church by avenging justice...registered in heaven; nor can any pretence to present liberality reverse the condemnation...its infamy is engraved in rock for ever. [The Roman Catholic Church] wallowed so greedily in oppression, torture, and murder in her palmy days, that the foam of human gore hangs around her wolfish fangs, and men will not believe her to be a gentle lamb, let her bleat as she may." ALL that call themselves CHRISTIANS should own and read this book!

The greatest story in English History

Published by Thriftbooks.com User , 21 years ago
This book is pure history and is very controversial. There was a time when every home had this book along with The Bible. This book had a great influence on the English people for centuries. Much of the history covered here are events during the reign of Bloody Mary I. After the Reformation many kings and queens had a violent backlash against the people they believed a threat to their power. The printing press was a hated invention and owning a Bible was a death sentence because people for the first time in certuries people could begin to think for themselves.This is also a very hated book. It would be very easy to dismiss the events here to prejudice and propoganda but it should be kept to mind that the historic record does show 300 men and women were burned to death because of the Inquistion brought by Mary to England. This book was a warning to people of the things that could happen under a Catholic monarch. The distrust of Catholics would continue for hundreds of years.With this book came the end of burning heretics at the stake in England. The horror of this book may have showed the common man how wrong it was to be so cruel to his fellow man. It is a monument in English Literature and one of the earliest works of modern English. I loved every page.
Trustpilot
Copyright © 2022 Thriftbooks.com Terms of Use | Privacy Policy | Do Not Sell or Share My Personal Information | Accessibility Statement
ThriftBooks® and the ThriftBooks® logo are registered trademarks of Thrift Books Global, LLC