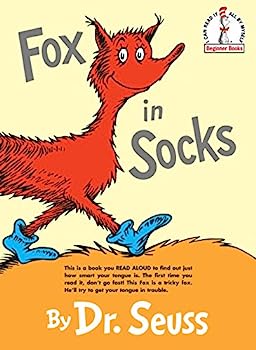 Find out how wacky words can be with Dr. Seuss and the Fox in Socks in this classic hardcover picture book of tongue tanglers! This rhyming romp includes chicks with bricks, chewy blue glue, a noodle... This description may be from another edition of this product.

Fox in Socks...but NO CD

Published by kim , 9 months ago
I ordered this book as a book and CD. But what I got was just a book and no CD. I was disappointed because I had ordered it for one of my preschool classrooms as a listening center and we didn't have the CD for listening. I would not have paid the amount for just a used paperback book with no CD

Published by Brooklea Fortenberry , 1 year ago
I ordered a version in “good” condition. It came in fair condition. I was willing to over look the fact that the book is not in good condition because it is used, however there was a page missing! I am upset about that.

Fox in socks, I wish I had not!

Published by Nicole , 1 year ago
I have ordered from here many a times and never have I had a complaint. This book was listed as very good but when I received it, it had scribbles and writing all through out it. I wouldn't give this book to someone for free.

Published by Lizzie , 1 year ago
Book's condition was as stated so pleased about that since none of the other books I bought matched their rating. This, I paid a higher rate than their condition really was.

Published by Preso , 1 year ago
Bought this book in “Like New” condition, came with an entire corner bitten out of it and fair amounts of damage to the cover as well. Would be fine if I’d expected that, but not very fair when you pay for a “like new” conditioned book.

Book Is totally ruined by crayon

Published by Bri , 3 years ago
I bought this book in "good" condition and it gets here totally covered and unreadable in crayon

Published by Pat Vasil , 3 years ago
Dr Seuss' Fox in Socks - a gift for my granddaughter. Who doesn't love Dr. Seuss!!

Published by Jade Ivy , 6 years ago
My daughter hasn't got into reading yet (all of three years old but we're getting there) so I was left as the designated reader. With that being said, I was tired form this childhood classic of mines and have sworn it off for once a month reading. Either way, I've always loved it and the shipping and condition was as described.

Published by Thriftbooks.com User , 21 years ago
Dr. Seuss has created another entertaining children's classic with "Fox in Socks." The plot is simple: the clever title character dazzles his friend Knox with a series of increasingly complex tongue twisters. Along the way, Seuss reveals a number of fantastic images: a marching band in which all the musicians are pigs, a crow in a top hat, and more.The book even has a touch of science fiction when the Fox introduces Knox to a weird lake of chewing gum-like blue goo. But it's the tongue twisting rhymes that are the central attraction of this book. By the time you get to the "muddle puddle tweetle poodle beetle noodle bottle paddle battle," you will certainly appreciate Seuss's writerly virtuosity. This is a fun book, and the Fox earns his place alongside Seuss's most memorable characters.

Repetition and Rhyme You Say?

Published by Thriftbooks.com User , 22 years ago
Dr. Seuss once again proves that rhyming tongue twisters repeated over and over and over again will help my child learn to read and associate words and sounds and drive me nuts in the process. It was worth it. Thank you.

Published by Thriftbooks.com User , 22 years ago
I had this book when I was young, and unfortunately tore it up beyond recognition....but when I had my own son 4 years ago, I HAD to get this book......my husband and I would crack up when we'd read this aloud to my son as an infant, and now that he's older, he's laughing along with us! This is GUARANTEED to bring a smile upon the readers face, as well as anyone around who gets the joy of hearing them! I'm now 27 and I STILL love it!

Published by Thriftbooks.com User , 24 years ago
Sure, it teaches valuable vocabulary words and rhyme schemes to tiny tots. And no doubt there's a thesis somewhere comparing hapless Knox to Stalin knocking heads against the red-white-and-blue American Fox. But *Fox in Socks* is above all other things the first instrument of torture children can use against their parents. Take Father, tired out from a hard day at the office. "Read me a story, Daddy," coos his blond princess. Father bravely tries to wrap his tongue around "Luke Luck likes lakes./ Luke's duck likes lakes." Daddy's little angel chortles with each misspoken word -- and there are plenty of them by the time he arrives at the muddle puddle tweetle poodle beetle noodle battle paddle battle." She goes to sleep secure in the knowledge that not only can she grow up to be president, but that she's already smarter than her poor parents. And that's the genius of Dr. Suess. His tongue teasers and outrageous Goo Gooses and Bim Bens and Tweedle Beetles don't just foster imagination -- they encourage kids to let it run rampant.

Published by Thriftbooks.com User , 24 years ago
Even though it elicits the occasional groan of agony from the adult doing the reading, Fox in Socks is THE favorite book in our house! That silly, socks-wearing fox and poor, beleaguered Mr. Knox have brought many a giggle to our bed-time reading adventures, not to mention the childish howls of laughter heard during the pathetic, tongue-tripping rendition presented by the victim...ahem...parent chosen to do the reading. From the start of the game to the beetle-battle atop the noodle-eating poodle at the end of the story, Fox in Socks is a frolicking romp for kids of all ages. Every house with or without children should have this book-it's a classic no library should be without!

Fox in Socks Mentions in Our Blog 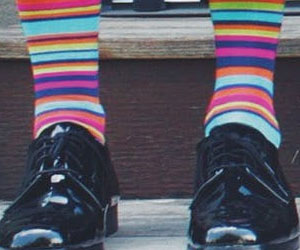 We Wear Them All the Time, but When Did Socks Become a Thing?
Published by Beth Clark • December 04, 2018

Socks are such a basic item that they're easy to take for granted...and leave on the floor, shove under beds, or lose to the dryer monster. (It happens to the best of us.) But socks actually deserve mad props for keeping our wiggly and sometimes stinky feet dry, warm, and free from blisters, so in honor of National Sock Day, here's a little history of how they became a thing and some "rules" to follow. (And yes, no socks with sandals is one of them, but that wasn’t always the case...)