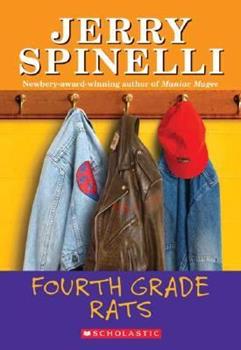 A fast, fun, friendship read from the Newbery-award winning author of Maniac Magee. Fourth graders are tough. They aren't afraid of spiders. They say no to their moms. They push first graders off the swings. And they never, ever cry.Suds knows that now that he's in fourth grade, he's supposed to be a rat. But whenever he tries to act like one, something goes wrong. Can Suds's friend Joey teach him to toughen up...or will Suds remain a fourth grade...

Published by Thriftbooks.com User , 16 years ago
Fourth Grade Rats by Jerry Spinelli is a fantastic book. There are two fourth graders named Suds and Joey. Joey thinks that just because he's a rat, he can boss little kids. There are first grade babies, second grade cats , third grade angels, and fourth grade rats. Joey always tells Suds to be mean and say no to his mom. Suds nice and always wants Joey to be nice. Suds wants to be a rat, but his brain tells him not to. There is a part in the story when kids make fun of Suds. Then he gets really mad and shoves a cake in a third grader's face. Then that's when he starts to be a rat. This story takes place at a school and Joey's house where Suds trains to be mean and bad. At the school many bad and interesting things happen. The story is about how to be bad and mean. Many bad things happen. Joey pushes kids off of swings. There is a part when Suds tries to train to be bad. When he is trying to be mean he has to climb up Joey's house. The part that I liked most was when Suds climbs a tree to impress the girl that he likes. I like this book. I recommend all kids to read this book, it is very interesting and funny.

Published by Thriftbooks.com User , 17 years ago
Jerry Spinelli unfolds a basic story and sprinkles humor, love, detail, and a major life lesson. Fourth Grade Rats is a book about a ten-year-old named Suds who is in fourth grade. According to the rhyme, "First grade babies, second grade cats, third grade angels, fourth grade rats", he is now supposed to be a rat. However, it isn't like him that he should steal first and second graders Twinkies, throw them off the swings, say "no" to his mom, and mess up his room, but his best friend, Joey Peterson, thinks otherwise. He tells him to get rid of his flying elephant lunchbox, eat bologna sandwiches instead of peanut butter and jelly, and to steal Twinkies and kick little kids off swings. His love, Judy Billings, goes after Joey when a bee lands on his arm and stings him--and he doesn't even cry. The major life lesson is don't let anybody pressure you into doing anything you don't want to do. I loved this book because of its major life lesson, and its detail. I would recommend this book to anybody and everybody.

This book is one of the best!

Published by Thriftbooks.com User , 21 years ago
This is a comedy book. The setting of the story takes place at the characters house and in the swings at the school playground. That's where the story starts. The main characters names are Suds and Joey. Suds likes taking a bath when he has a problem. Joey likes to act cool! Like a rat. He wants to get Suds to do the same things as him. The other little character is Judy Billings. She is a big show off and will go for any tough guy. (Suds likes her.) The story begins at the school playground where first graders teased fourth graders by saying they were rats. Every body felt bad to be a rat, except joey, he was proud to be one. He said it was the first step to become a man. That's when the problem starts. Joey wanted suds to be a rat too. Joey was telling him to say no to his mother, eat baloney, push little kids around, and not to be scared to what suds is scared of most, spiders. (suds doesn't like the sound of that.) The resolution to the problem happened when Joey's mother went to Suds house and told him that Joey shouldn't have pushed him into the rat stuff, and that he was dropping out of the rat race and joining the human race again. finally the story ends when Suds tells his mother a conffession: that the last few days that he was a rat it was all him, without Joey telling him to do so. Or making him do it. At first Joey was the one pushing him to do the things. After it was just him doing them. I recommend this book because I like comedy books. Dialogues between characters are funny.I enjoyed this book very much. This book will show you not to follow what you think doesn't sound to good and to be a leader, not a follower just because you think the person who you are following is cool! This book is one of the best! Only now be a follower and get the book and read it! Alex

Published by Thriftbooks.com User , 21 years ago
This is a great book! I am in 3rd grade so I am an angel. This one boy was sad because he was a rat and he wanted to be an angel again! But his friend liked to be a rat and started to be messy! He talked his friend to be messy,mean,and brave. Let me remind you that it is a great book and I hope you like it too!
Trustpilot
Copyright © 2022 Thriftbooks.com Terms of Use | Privacy Policy | Do Not Sell or Share My Personal Information | Accessibility Statement
ThriftBooks® and the ThriftBooks® logo are registered trademarks of Thrift Books Global, LLC