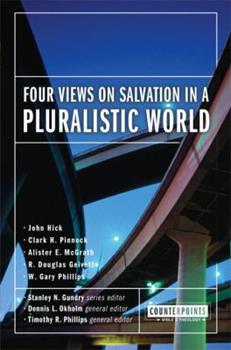 Four Views on Salvation in a Pluralistic World

(Part of the Counterpoints Series)

Religious pluralism is the greatest challenge facing Christianity in today's Western culture. The belief that Christ is the only way to God is being challenged, and increasingly Christianity is seen as just one among many valid paths to God.In Four Views on Salvation in a Pluralistic World, four perspectives are presented by their major proponents: Normative Pluralism: All ethical religions lead to God (John Hick)Inclusivism: Salvation is universally...

Published by Thriftbooks.com User , 13 years ago
A great range of concepts and vocabulary is thrown around. A bit technical, but I found it intellectually and spiritually inspiring. And now I found out my alma mater is using it in one of their theology classes. I recommend it but its not for everyone.

Good book in the Counterpoint Series

Published by Thriftbooks.com User , 14 years ago
This book is part of the Zondervan Counterpoint Series which I would highly recommend. For the lay person who has a full time job, the various views presented can get you up to speed quickly. What is lacking in depth is made up for in breadth. This book on religious pluralism is just as fresh today as in was when this book was written. All four views are well represented and the format where each author responds to the others is very good. For those who want to dig deeper on this topic, I would recommend Sander's "No Other Name".

Published by Thriftbooks.com User , 15 years ago
This book offered an expansive and surprisingly lively exchange between four streams of theological thought pertaining to the relationships between Christianity and other religions, specifically in connection with salvation. John Hick represented the pluralism camp, Clark Pinnock represented the inclusivist camp, Alister McGrath represented a more broadly defined camp within particularism, and Douglas Geivett and Gary Phillips jointly represented a narrower branch of particularism. I found the experience of reading this book to be extremely rewarding. It was a difficult read, probably as philosophical in nature as anything that I've ever read. The language that the authors used was more complicated and intricate than typical (though they would certainly argue that they dumbed-down and truncated their standard arguments to fit within the confines of this particular format). And I was amazed and pleased by the honesty and direct nature of the dialogue. There were no punches pulled, and these great thinkers were perfectly willing to challenge and even insult each other (or at least each other's ideas). Though I was drawn to Hick's narrative introduction, I was immediately put-off by his aversion to the Bible. I instantly disconnected when he essentially decried the Bible as a series of man-made texts that were culturally/politically/theologically crafted for particular earthly purposes. I was further frustrated by the tenor of his writing throughout the book and found him to be less gracious than his colleagues. And without any foundation in the Bible or traditional Christian thinking, I found his arguments to be disconnected from any truth-source. Though he brought great challenge to my thinking, I remain unconvinced by his arguments. Pinnock was hard to understand, as he claims to fall within evangelicalism but seems to press very hard against the walls of that distinction. He makes a very compelling case against the notion of a loving God who would choose billions for hell, but I found his argumentation to be rather scattered and unconvincing. Geivett/Phillips were most closely aligned to my own spiritual upbringing, and they had the advantage of having me in their camp at the start. And though I found their approach to be comfortable for me (very Scripturally-based and well-organized), I was unimpressed by their logic and argumentation. The other authors seemed to be able to poke some significant holes in their reasoning, and I found their responses to be inadequate. Ultimately, I finished this book most impressed by the case and position of Alister McGrath. This result was somewhat surprising, as I've mentioned that I expected to align most closely with Geivett and Phillips. Instead, I found McGrath to have a very winsome tone through his writing. Though very direct and confrontational when needed, he was never patronizing like Hick, never desperate like Pinnock, and never careless like Geivett/Phillips. I appreciate the

Published by Thriftbooks.com User , 18 years ago
I'm going to apply this commentary for the entire Counterpoint Series published by Zondervan Publishing Company. My compliments to that company for creating this series. I initially purchased "Four Views on the Book of Revelation" but soon realized it was only one in a series. I got so much out of that volume, that I decided to purchase the entire set to study and keep for reference. My spiritual growth has been remarkable as a result. Seminary students and professionals would probably enjoy this series, which seems geared for them. But this series is also excellent for those college-educated laypeople who feel inclined to enhance their understanding of Christian theology. That is, with one caveat: Buy a decent theological dictionary to refer to at first. It probably won't get used much after about the third book you choose to read, but initially you will be need it to be confident of some of the terms used among advanced theologians. Then, the Counterpoint series will give you a full understanding of many different concepts and concerns of the Christian faith which have been applicable from early on until the present. I've learned a lot, and the only way I think I could do better is if I were enrolled in Seminary. A list of all the titles I am aware of from this series is: Are Miraculous Gifts for Today? Five Views on Law and Gospel Five Views on Sanctification Four Views on Hell Four Views on Salvation in a Pluralistic World Four Views on the Book of Revelation Three Views on Creation and Evolution Three Views on the Millennium and Beyond Three Views on the Rapture Two Views on Women in Ministry

Published by Thriftbooks.com User , 21 years ago
If you want to see first-hand how postmodernism has infected the Doctrine of Salvation within evangelical Christianity - this is the book. Coming from a conservative evangelical background it was interesting and informative to have a concise overview on the other schools of thought all in one volume. It also provides an excellent affirmation of the exclusivity of salvation through Christ. I particularly enjoyed how the contributors interacted with each other on the four views. A must read for anyone who wants to be equipped to evangelize in the 21st century.
Trustpilot
Copyright © 2022 Thriftbooks.com Terms of Use | Privacy Policy | Do Not Sell or Share My Personal Information | Accessibility Statement
ThriftBooks® and the ThriftBooks® logo are registered trademarks of Thrift Books Global, LLC