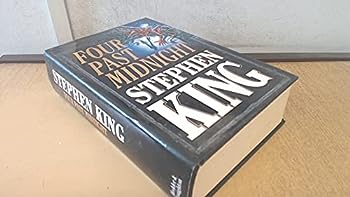 Jet passengers are stuck in a time-slip, a psychopath accuses a writer of plagiarism, a man with an overdue book encounters a demonic librarian, and a boy's camera snaps photos of a huge and nasty dog in these four horror novellas. Repackaged. Reissue.

Four tales of terror to keep you up past midnight!

Published by Horror crazy , 1 year ago
As another reviewer said, the shorter Stephen King keeps his stories, the better they are! Nothing proves that better than this horrifying collection of heartstopping novellas! Stephen King has given his readers the gift of a lot of short fiction that includes six short story collections: Night Shift, Skeleton Crew, Nightmares and Dreamscapes, Everything’s Eventual, Just After Sunset, and The Bazaar of Bad Dreams. He has also given fans four collections of novellas: Different Seasons, Four Past Midnight, Full Dark, No Stars, and If It Bleeds. Four Past Midnight, his first official collection of horror novellas, is a terrifying treat for horror fans everywhere because it’s a stunning anthology of 4 supernatural tales of terror. The Langoliers is about an ordinary flight that suddenly goes wrong in the most bizarre way: After ten passengers awaken to the startling discovery that they are suddenly the only ones on the plane, they eventually find that they have traveled backward through time by as little as only ten minutes. The only thing more eerie than knowing they are alone is realizing that something is coming for them. Secret Window, Secret Garden is about Mort Rainey, a writer who one day finds his worst nightmare standing at his front door, a stranger who accuses him of plagiarism. Things don’t go from bad to worse, they go from bad to horrifying as Mort discovers that his uninvited visitor is psychotic. The Library Policeman is about a man who finds his worst fear from childhood, a creature he called “the library policeman”, waiting in a small town library. In The Sun Dog, Kevin, a friendly teenager, receives the most frightening birthday gift anyone could imagine: A camera that takes the same picture, a picture of the sun dog, a horrendous beast that will soon escape from its celluloid prison. And when it does, God help anyone standing in its way! If you’re looking for a book of nightmares from the King of Horror, you’re in luck! As the Milwaukee Journal put it, this is “A 4-course feast of chilling horror!” Enjoy!

Published by Thriftbooks.com User , 13 years ago
Another Stephen King masterpiece. All 4 stories were very well written. King gives you all the details you need to imagine these characters as if they are real and to see everything happening. Even if you've seen the movie "Secret Window" staring Johnny Depp I strongly urge you to read this. His books are 100% better than any of the movies of his work (even though Johnny Depp did an outstanding job in his role of Mort Rainey).

Published by Thriftbooks.com User , 16 years ago
In "The Langoliers," a handful of people fall alseep on an airplane...they then wake up in a world without life, still in the plane. It is full of great characterization and suspense, along with a few twists! A personal favorite. In "Secret Window, Secret Garden," a writer, Mort, is accused of plagerism...this story turns into much more than that, however. It's really shocking, and hard to call if you haven't see the movie (Secret Window). In "The Library Policeman," the main character (can't recall the man) is haunted by his childhood fear of "the library policeman". However, that fear is rational...for the Library Policeman...is real! In "The Sun Dog," Keven gets a camera with a haunting effect..it has the picture of a a dog slowly moving. Very haunting and creeping, with a masterful ending!!!! "Four Past Midnight" is a collection of novellas that are all amazing. HOWEVER, please note that the reader must be able to stretch his mind in all cases, as many of the stories are unrealistic. However, all of them are really horror and truly amazing. GO STEPHEN KING!

Published by Thriftbooks.com User , 16 years ago
If you're a Stephen King fan, this is a must read. Its four novellas that take you on very different rides, all ending at the same junction: death and an acceptance of that not all things can be explained. My favorite is the Langoliers. I've read this book a long time ago and have still remembered each story. I am now hunting through my bookshelves to find it so I can reread! If this is your genre, then you should get it.

Published by Thriftbooks.com User , 21 years ago
Although I must admit, I haven't read the other stories yet, and I stress YET, I was very impressed by the Langoliers! Man, what a cool book! I loved the whole idea of a group of strangers thrown into an adventure they have no control over! And just what are the Langoliers... woah! They were so cool! For those of you who didn't know, there is a movie by the same name! If you enjoyed the book as much as I, then you'll love the movie. Its a very good adaption!

Past midnight, King is at his best

Published by Thriftbooks.com User , 21 years ago
The shorter Stephen King keeps his stories, the better they often are. "Four Past Midnight" is very effective because he doesn't have room for unnecessary flourishes and simply sticks to the story. The first of the four stories, "The Langoliers," is one of his most imaginative and all time best. The other three stories are also quite good. Frankly, King would be an even better writer if he told all of his stories with the economy of words that he gives the tales in "Four Past Midnight."

Four Past Midnight Mentions in Our Blog