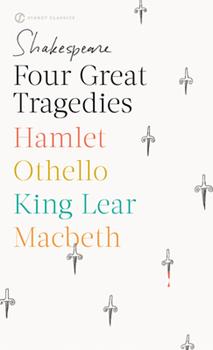 The greatest tragic plays of William Shakespeare--including Hamlet, Othello, King Lear, and Macbeth. What is tragedy? The Elizabethans defined it as a "lofty" play showing "personages of great state" caught up in a "lamentable" action that "beginneth prosperously and endeth unfortunately." Whether judged by this or any other standard, the plays selected for this collection are considered to be the four central works of Shakespearean tragedy and must...

Published by Thriftbooks.com User , 13 years ago
I ordered this book for my AP English class, and I love that it has all four of my favorite Shakespeares together. I like the typeface, the footnotes, everything. It's small enough to carry around in your purse. I recommend it for the pleasure-reader, student, or teacher. It's a great value, too.

Shakespearean tragedy -Greatness is all

Published by Thriftbooks.com User , 17 years ago
To have the four great tragedies together raises the question of what the essence, the real heart of Shakespearean tragedy is. In Aristotle's definition of Greek tragedy the overweening pride of the hero(hubris) and tragic fault( hamartia ) lead to his eventual destruction. The audience watching this is in the course of this purged of pity and fear. In Shakespearean tragedy there is as in Aristotle a hero who is larger than the ordinary man. The hero too has a great flaw and comes to a destructive end. But the doubt and hesitancy of dreaming Hamlet, the great ambition for kingship of Macbeth, the blind filial love of Lear seem more emotionally complex than that of the Greek heroes. And the language in which the story of their respective downfalls is told is too more rich, complex, and ambivalent than that of the clearer Greek earlier model. And this in such a way that the Shakespearean tragic heroes each seem to be in themselves a kind of supreme human essence, a manifestation of character at its greatest level of intensity. Shakespeare's greatest heroes are individuals who become in some sense the ' type' of themselves, and live in our minds as models of humanity in its extreme essence. 'Greatness is all'

Published by Thriftbooks.com User , 19 years ago
HamletThis play, of course, is perhaps the best known in all of English literature. Taking it's inspiration from lesser plays and tales of the same name, Shakespeare crafted the characters, dialogue and plot into a timeless tale of betrayal, the quest for justice, and ultimately a hollow victory. This play, in short, is a downer.I will speak daggers to her, but use none.Of course, it really thrilled the audiences, who, lacking the primetime violence of today, enjoyed seeing the blood, the gore, the violence, the swordplay. Those with a more subtle bent were very satisfied with the wonderful dialogues, full of double and self-reflexive meanings. So many of the monologues have become common parlance in our language. A hit, a very palpable hit.The 'on one foot' synopsis: Hamlet, prince of Denmark, is suspicious that his step-father killed his father and usurped the throne and his mother's bedchamber; he plots to get revenge; in the meantime his love-interest Ophelia dies; in a duel to the death at the end the mother dies, the step-father dies, the duel contender dies, and Hamlet dies. Something is rotten in the state of Denmark.The rest is silence.OthelloRude I am in speech,And little blessed with the soft phrase of peaceSurely Shakespeare was not speaking of himself here. Even his poorly-spoken characters cannot help to have an elegance and subtlety all their own. Othello is another tragedy, this one driven by jealousy. The exact cause of the jealousy can vary; Iago can be jealous of Othello, of his love for Desdemona, of Desdemona herself, or several other possibilities. The emphasis often lies in the performance, and Shakespeare's play is written broadly enough to allow for any of these to be correct interpretations.But men are men; the best sometimes forget.Othello satisfied the need for violence, for passion, and for intrigue. 'On one foot', Iago, servant and friend of Othello, who also hates Othello, plants the seeds of suspicion that Desdemona has been unfaithful, leading Othello down a treacherous path that leads in his ultimate murder of Desdemona. Take note, take note, O world!To be direct and honest is not safe.During one performance in the American Old West, an audience member became so entranced and enraged with the actor's portrayal of Iago that he took out his pistol and shot him. The tombstone of the actor reads 'Here lies the greatest actor'. LearThe prince of darkness is a gentleman.This most difficult of Shakespeare plays, both for performing and for studying, is one of the true masterpieces of English (or any) literature, and yet is underperformed and underappreciated due to the power of its complexity and of its tragedy. Indeed, often the tragedy at the end has been softened by having Cordelia survive victorious. Beware these kinds of performances--they not Shakespeare's intent, however much we wish.Lear begins with folly, and ends in tragedy, while treachery and evil seems to creep like a vine choking off first this person, the

The Best of Shakespeare in One Book

Published by Thriftbooks.com User , 19 years ago
Having a love of literature, and being an English Lit. major has given me the oportunity to read most of Shakespeare's works. Shakespeare's talent and genius has surely endured and his beautiful writings are essential to mankind not only in the classroom but throughout our lives. His tragedies speak the loudest to me, as they are charged with drama, emotion and memorable quotations. Having to choose a favorite book of all time I would say, "Othello." Yet Hamlet is my second favorite drama of Shakespeare's, and Macbeth also holds strong. I do not care for King Lear but having Shakespeare's 4 greatest and most popular tragedies in one book is a collection worth having.

it's about prejudice and jelousy

Published by Thriftbooks.com User , 24 years ago
otthelo was the lord of jelousy towords his lovely wise desdemona. It's quit interesting at the beginning and ended with a very sad situation.
Trustpilot
Copyright © 2022 Thriftbooks.com Terms of Use | Privacy Policy | Do Not Sell or Share My Personal Information | Accessibility Statement
ThriftBooks® and the ThriftBooks® logo are registered trademarks of Thrift Books Global, LLC