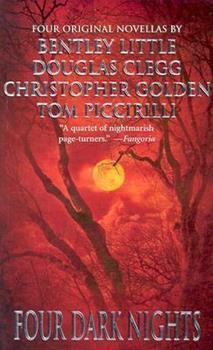 Four modern horror masters--Bentley Little, Douglas Clegg, Christopher Golden, and Tom Piccirilli--present a nightmarish collection of novellas, each taking place during one dreadful night, that vividly brings to life the terrifying things that lurk in the darkness. Original.

Published by Thriftbooks.com User , 14 years ago
this book arrived in the properpackaging for protection and was in excellent condition, yes i would recommend this company and buy from them again.

Douglas Clegg Again with His Words

Published by Thriftbooks.com User , 18 years ago
This short novella is about 90 pages long. And believe you me and in can be read by just one sit down. He grabs you from the very beginning of the story.Mark and Dash are the two main characters and these two boys travel into the darkness of life. And 'THE WORDS' are magic as to entrance you into another world or realm of life.Classic Clegg!!

The Four Nights of Terror

Published by Thriftbooks.com User , 18 years ago
What happens when you take four masters of the macabre and ask them to write a horror tale that unfolds under the course of one night? Well, the results is Four Dark Nights, an anthology that takes four of the best names in today's horror field to display their widly twisted imaginations.The first fourth is a nasty little story called The Circle by Bentley Little. The story plays with time, and with your mind, in amazing ways. You will find a whole neighbourhood blasted into a complete nightmare when a spell is cast of them all. You can't ever predict what's going to happen. The story is also darkly funny. This is the best thing Little has written in a while.The next two stories, unfortunately, do not display the best of their authors. Christopher Golden's Pyre has its heart in the right place, but its slow-pace and its very predictable payoff take too much away from the story. Here,you find a young woman who wants to resurrect her father to make things right with him again. Tom Piccirilli's Jonah Arose might be too dark original for its own good. The story is a little too depressing and a little to anti-climactic. A pack of dead (or are they?) freak-show attractions are trying to find the narrator's son and rescue him from his demented kidnapper in a world that is eerily similar to ours, but also fundamentally different. Piccirilli's style takes too long to get accustomed to, and the story takes too much time to unfold for you to really fully enjoy yourself.The heart of this book is written by today's most powerful, most imaginative and most entertaining horror writer. Douglas Clegg has a unique voice that is both strong and magical. And his story The Words does not disappoint. You can always count on Clegg to deliver the goods and he does so again this time around, and then some. In this story, a group of teenage highschoolers find themselves stranded in an abandoned church where an evil force has been resurrected. Clegg has an amazing ability to create characters you care for and want to know more about. The story is scary, fast-paced and very affecting. Douglas Clegg is bound to become one of the most important voice in today's horror field.These four novellas will provide a great deal of entertainment. Maybe it wasn't fair to pit Golden and Piccirilli against masters like Little and Clegg. But in any case, the book is more than worth its price for its opening and closing stories. The two tales in between are just icing on an already very colorful cake.

Published by Thriftbooks.com User , 19 years ago
Picked up Four Dark Nights in SF two days ago and rushed through it in two long sittings. Great stories! The novella is a lost art form and all the authors here managed to come up with damn-near classic creations. Little's was a suspenseful thriller; Golden's a wonderfully evocative and thoughtful fantasy; Piccirilli's return to the Works was a macabre, bizarre, enticing effort; and Clegg's The Words is haunting and creepy with a totally killer ending. Of the four, Clegg's and Piccirilli's pieces are the stand-outs for me. They're just more weird and eerie, and that's what I'm always after as a horror reader. But all these novellas are first-rate. Definitely nab this book as soon as you can!

Published by Thriftbooks.com User , 19 years ago
The entries by Golden and Picirrilli are not bad if a trifle long, but the ones by Clegg and Little are outstanding. Little's story in particular, with its "Pulp Fiction"-esque time jiggling, is a standout. Scary and poignant at the same time, as well as being wildly original. This is a superior collection by four of horror's current top talents.
Copyright © 2020 Thriftbooks.com Terms of Use | Privacy Policy | Do Not Sell My Personal Information | Accessibility Statement
ThriftBooks® and the ThriftBooks® logo are registered trademarks of Thrift Books Global, LLC