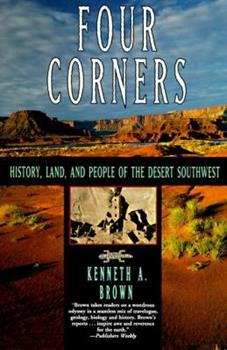 Four Corners: History, Land, and People of the Desert Southwest

by Kenneth A. Brown

In this masterful tour de force of nature writing, Kenneth Brown explores one of the most awe-inspiring regions on earth -- the Four Corners of Colorado, Utah, Arizona and New Mexico. Weaving together its geological, ecological and human histories, he presents a unique portrait of this ruggedly beautiful landscape that goes beyond mere description to give readers a true sense of the land in all its richness. Here are rock croppings that are 2 billion...

Remarkable book on the Land. the People and Its Mysteries

Published by Thriftbooks.com User , 14 years ago
If anyone has been to the Four Corners area, particularly the Grand Canyon and Monument Valley, you will appreciate the author who takes you well beyond those more obviously known pleasures and takes you into more remote and attrarctive parts of the large four corners area giving the reader an introduction to geology while explaing in the initial chapyers how the land and continent was formed. The books goes on to discuss each area, its rock formations including mountains, plateaus and valleys and the vegetation that makes each area unique. The author includes interviews with numerous specialists throughout the book along his own personal journey through these ares that he hikes and camps and spends time in some very remote areas. His discussion of the people that once lived on the land and the ones that currently do provides a human linkage to present day. The mystery of the Anasazi is quite fascinating as these ancient cliff dwellers disappaered around 1400 AD but may have become part of the present day Hopi tribe. The description of their cliff like fortess dwellings and the archelogical studies is one of the most interestiung parts of the book. Why did they live along a cliffs in large communities and what happened to them? The book is not a quick read but one that deserves patience to appreciate the indepth descrptions that Brown provides. The only downturn, which is very slight, is that the author has little tolerance for tourists that in his opinion, along with the specialist he meets, strongly feel that tourists overwhelm these sensitive sites. However, for one who loves to travel these wonderful places with great respect for the sensitivity of the environment, we must all do our part to try to rein in those few that unfortunatey create a negative impact no matter where they visit or live.

Excellent intro to the land and people of the SW US

Published by Thriftbooks.com User , 16 years ago
This is a fascinating account of the land and people of the Four Corners region of the southwestern US. Brown is as interested in the geology of the region as he is in the settlers of it. The book is basically divided into five large sections, one for each major point on the compass and a fifth entitled "Center." He begins each section with a thorough discussion of its geology. From there he proceeds to the peopling of each section, from the early hunters and gathers to the Anasazi, Spaniards, and Mormons. His long sub-section on the Anasazi is especially good. One thing Brown makes clear is that, unlike the "politically correct" view held by many today, the Americas were not a Garden of Eden before European contact was made. Native tribes fought ferociously with one another over land and resources; even slavery was practiced among the tribes. And after the disastrous Pueblo uprising of 1680 that virtually emptied the country north of the Rio Grande of all Spanish inhabitants, the Spanish realized they would have to cooperate with the Natives to insure security and success. Brown is an excellent writer and captures the uniqueness of the desert Southwest well without going into rapturous (and phony) doggerel. He is a "loner," however, relying on historical records or scientific textbooks for most of his information, and rarely brings along another geologist or historian to hash out information. (This being the case, it's surprising that there is no bibliography included.) Even his own personal observations, other than a few camping/hiking scenes thrown in here and there, are kept to a minimum. Some might object to this impersonal approach, but it didn't bother me at all. The book is interesting and informative - an excellent overview of the desert Southwest.

Published by Thriftbooks.com User , 19 years ago
As a native of Utah and a student of the geology and natural history of the Colorado Plateau, this is without a doubt the best available summary of the fascinating heritage of the Four Corners region. I've read the paperback edition from front to back twice and parts of it three times. I recently managed to find a copy in hard back in excellent condition that I've added to my collection of keepers, and I'll read it again before I make my next trip to southern Utah. It astonishes me that I have yet to find this book at any of the national park bookstores. This book is very highly recommended for anyone with an interest in or planning to visit the most remarkable region of the continental United States. It's a great introduction to so many facets of this awesome area! In my opinion, it communicates the flavor of the country as well as John Wesley Powell's classic documentary of the first formal exploration of the Colorado River. Don't miss this one.Michael Shea, MD

An eloquent, detailed overview of the Colorado Plateau

Published by Thriftbooks.com User , 22 years ago
This book deserves a less prosaic name. With an engaging writing style, Kenneth Brown provides a knowledgeable and highly readable introduction to the natural and human history of the Colorado Plateau, including the geology, forests and biological life zones, and the Anasazi, Pueblo, Navajo, Spanish, Mormon, and recent Anglo influences. I'd highly recommend Four Corners to anyone with an interest in this fascinating region.
Trustpilot
Copyright © 2022 Thriftbooks.com Terms of Use | Privacy Policy | Do Not Sell My Personal Information | Accessibility Statement
ThriftBooks® and the ThriftBooks® logo are registered trademarks of Thrift Books Global, LLC