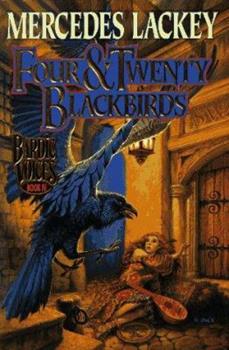 (Book #4 in the Bardic Voices Series)

A magical maniac is loose in Alanda. A magical murderer is loose in Alanda. The victims are always women, always lower-class, and the weapon is always a three-sided stiletto, most often found among Church regalia. But the killers are never churchmen, and they always commit suicide immediately after the bloody deed.

I found this very intriguing

Published by Thriftbooks.com User , 18 years ago
I read this book AGES ago, and I still remember the plot and the story, I think it was very well written and plotted out. As I search through the mass of Misty books I have come across some rather entertaining reviews, I think that most if not all her books are excellent reads. I don't know why I liked this one in particular, but I think it's because ML took a chance on writing in a different aspect than we are used to, and I love to see writers and songsters go out of the "norm" and explore themselves. The only thing I had wished with this particular novel is that ML had actually created a secondary story to go with it, I could almost feel the storylines pouring forth just waiting to be told...

A departure from the usual free bard stories

Published by Thriftbooks.com User , 22 years ago
Readers expecting the usual cast of characters from the free bard tales will be disappointed. While a few characters are carried forward from the previous books, including Ardis, Duke Arden, the Haspur Visyr, etc., this story has a new set of players. The chief protagonist is Tal Rufen, a police constable from Haldine investigation a string of mysterious and brutal murders of poor female street musicians/singers (or would be musicians) - murders committed by strangers that commit suicide, and murder weapons that vanish. As he follows the string of murders, Tal's investigation takes him to Kingsford and the High Bishop Justiciar Ardis. This is the Kingsford following the fire (see "A Cast of Corbies"). Tal finds himself in a new position, carrying out investigations for the church. Tal and Ardis must appraise their feelings for each other. Events lead to a final confrontation between Tal and an evil mage, living under a curse, who has a grudge against free bards and Ardis. The plot and characters are well developed to provide an interesting tale, but somewhat on the dark side (tracking a serial killer).

A Dramatic About Face for a slumping series

Published by Thriftbooks.com User , 23 years ago
After the tackiness of the Eagle and Nightingale novel Ms. Lackey has penned a truly solid and gritty story. The characters seem more than one dimensional and the sexual tensions are appropriate for a change (IMHO).The tone IS as another reviewer mentioned much darker and if that is not what you crave you best avoid this Lackey effort.

Mercedes Lackey does it again....

Published by Thriftbooks.com User , 24 years ago
Another great book by Mercedes Lackey! Four & Twenty Blackbirds is the 2nd best book in this series, though as I read through, I was disappionted that there was nothing about the Free Bards in this novel, there is only mention of them. But , none-the-less, this was a very interesting, suspensful, wonderfully written book! But then again, what do you expect by todays best fantasy writer!!??

The perfect book by the mistress of fantasy fiction

Published by Thriftbooks.com User , 24 years ago
In Alanda, there has been a rash of murders in which female street musicians are viciously killed, followed by the culprits committing suicide. The murder weapon is a three sided stiletto (used mostly by Church dignitaries) which seems to mysteriously disappear from the spot of the crime. The murders seems to occur only when it rains so that traces of magic can be washed away before the police can begin their investigation. Because the murderers kill themselves and the victims are lower class, the police are indifferent to the crimes except for Haldene constable Tal Rufen, who thinks there is more to the killings then meets the eye. Tal resigns in order to join the High Bishop's staff where he can begin to investigate the murderous use of magic. The fourth book in Mercedes Lackey's "Bardic Voices" is a well written fantasy novel that will thrill fans of the series for its tremendous amount of detailed information on Alanda. However, for most other readers, including other fantasy fans, the minute detail overwhelms a well written novel. Harriet Klausner
Trustpilot
Copyright © 2022 Thriftbooks.com Terms of Use | Privacy Policy | Do Not Sell My Personal Information | Accessibility Statement
ThriftBooks® and the ThriftBooks® logo are registered trademarks of Thrift Books Global, LLC