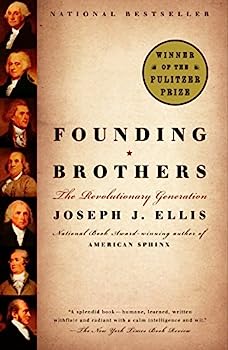 This description may be from another edition of this product. In this landmark work of history and winner of the Pulitzer Prize, Joseph J. Ellis explores how a group of greatly gifted but deeply flawed individuals--Hamilton, Burr, Jefferson, Franklin,...

Published by Brandon , 1 month ago
There is highlighting, notes written in pen, and dog earing. It is not unreadable but I am dissatisfied that I ordered Like New and got Good at best.

Published by JJD , 1 year ago
I ordered this book with much anticipation having just read the authors book on George Washington. I found the selected topics fascinating but the narrative incredibly boring. In short, the author spends too much pontificating about the meaning rather than trying to communicate the events. This is a book for those who are experts in the given topics and are looking for more insight. It’s not for the history buff who wants to learn more about a given topic.

Published by Thriftbooks.com User , 20 years ago
This book is a gem, and probably the most focussed piece of historical writing I've ever read. Professor Ellis tells us in his two-page introduction that his objective was to write a "modest-sized account of a massive historical subject", implicitly ragging on his professional colleagues who seem inclined more often towards just the opposite. In just 248 pages he takes on the thirty or so years following ratification of the U.S. Constitution, portraying this period as the most politically treacherous in our nation's history. He focuses primarily on the roles of six protagonists: Jefferson, John Adams, Madison, Washington, Hamilton, and Franklin. Aaron Burr appears too, but as a tragic foil to Hamilton more than as a significant player in his own right. Professor Ellis's technique, odd but effective, is to build six short chapters around various interactions among these key figures, arranging them artfully like a series of inter-connected short stories. Each chapter elucidates a key dimension in the political dynamics of the period, and the emotional impact of the book by the end is like that of a powerful piece of fiction, even though the author's adherence to the factual record is scrupulous. What emerges is a picture of the revolutionary nation facing the kind of crisis that undermines most revolutions as personal ambitions and conflicting agendas give rise to new tyranny or ongoing civil war. At one level, these were a group of jealous and bickering men with diverging views on the direction of the republican government they were laboring to craft. Yet in the end it is these very contradictions which allowed the improbable project to suceed, bringing in the diverse political threads necessary to bind the new nation. For divided as these politicians were, everyone of them was haunted by the fear that the cause to which he'd devoted his life was in imminent danger of failing. The great European powers lurked like vultures waiting to re-assert themselves over the divided States, and the "founding brothers" seemed to recognize that their collective talents provided the only effective bulwark against this treat. Hindsight, of course, tells us much more than they knew, and their triumph was to be sealed only following an unimaginable bloodbath forty years after the last of them died. That the union they built was strong enough to survive such a trauma was the ultimate testimony to their skill and perseverance. Professor Ellis has written an excellent and very accessible account of this complex story, and I highly recommend it.

Published by Thriftbooks.com User , 20 years ago
An exceptional book is like an exceptional teacher; an academic career may only provide one or two memorable teachers, while books because of their constant renewal offer many opportunities for memorable Authors/Teachers. Mr. Joseph Ellis has produced just such a literary rarity with his work, "Founding Brothers". The events surrounding The American Revolution are familiar in generalities to most, and the information is generally romanticized beyond recognition. The Author has a very informative as well as a strong, appealing narrative style that communicates a wealth of facts but does not induce the drowsiness of many historical works whose pages turn as if made of lead.Some have taken issue with the Author's style as being too loose or informal, and by implication arguably less than accurate. The notes at the book's end are not normally an area I spend a great deal of time with, however in this instance the Author shares his philosophy toward providing "sensible" documentation to his book. I believe this is refreshing and answers any critics. Firstly, a complete listing of references would be longer than the book, and a completely honest disclosure would require that he dredge up every piece of information that he has read and been influenced by for 30 years. Finally, he comments on those sources he has found to be particularly useful to his work, and they were interesting enough for a reader to enjoy as well.Everyone will have their favorite from amongst the six sections of the book. I believe they all are uniformly excellent, however two were of greater interest to me."The Duel" that took place between Aaron Burr and Alexander Hamilton in 1804 is an oft-mentioned bit of this Country's History. I have read many accounts of the event and none approach the level of detail and perceptive commentary that Mr. Ellis has presented. This death of one man, and the death of another's career is a vastly complicated event. It is true the actual discharging of weapons took only a moment, and that is usually where the analysis stops, and then the consequences that follow are listed. Happily in this work this is not the case as the Author brings nearly 2 decades of acrimony between these two men to bear on why they eventually found themselves in mortal conflict. This background is documented with depth but also with restraint, all the information without needless additional commentary. Mr. Ellis writes very well. He can enjoy an economical use of words, as he does not suffer from the impairment of being fascinated with the sound of his thoughts."The Friendship" has to be one of the most eloquent expositions of the final years of relations between 2 former Presidents, Adams and Jefferson. They may have been writing to one another, however they also documented their ideas of what the Revolution was for and what it meant, that the two men were polar opposites, from their style of speech, to their politics, personal conduct, and what they believed they had done

Published by Thriftbooks.com User , 20 years ago
Joe Ellis is well known for his biography of Jefferson (it won the National Book Award). This book, his most recent, will only elevate his reputation.In a series of historical vignettes, the reader learns about (among other things) the famous but mysterious duel between Hamilton and Burr, the awkward problem of slavery in the 1790s, the collaboration between Madison and Jefferson, George Washington's farewell and the famous relationship between John Adams (who is underappreciated according to Ellis) and Jefferson.Every vignette reads like a short story. The facts are riveting, the writing (as usual) is lucid, succint and sufficiently surprising. And the historical era of the 1790s can't fail to interest us all.There's absolutely no reason why this should not be the next book you buy. Get it for Christmas and give it as a gift to someone else. Where else will you learn, with such intelligence and historical insight, how majestic Washington was, how human Adams was, how strange Jefferson's personality was, and how conniving all the politicians were in the salad days of our country?

Published by Thriftbooks.com User , 20 years ago
Joseph J. Ellis has now made a habit of writing interesting books about the American Revolution and its aftermath. In his latest effort, Founding Brothers, Ellis concentrates on six incidents involving seven of our foremost American patriots. The topics (or chapters) range from slavery and the national debt to the location of the national capital and the disasterous administration of John Adams. While my favorite chapter deals with the dinner involving Hamilton, Jefferson and Madison. In which the federal government assumed the national debt from the states, for the relocating of the federal government, on the Potomac River. Jefferson and Madison also made sure that, unlike Great Britain or France, the national capital would not be the financial center of the country. Among the other informative points that Ellis brings up was that Hamilton was the only prominent American casualty of the ideological differences stemming from the decades after the American Revolution. The growing unpopularity of Washington's second administration with other prominent Virginians which culminated with his Farewell Address was also interesting. Founding Brothers is an exceptionally easy and quick book to read. Ellis repeatedly informs us what the world was like in the 1790's, when there was little historical precedence for a republican style of government or a biracial society. There were many labrythine agreements made between the founding brothers and Ellis' research is highly commendable in attempting to sort it all out. For anyone interested in the years that followed the ratification of the Constitution and the beginnings of our present day government, this book is a must.
Copyright © 2020 Thriftbooks.com Terms of Use | Privacy Policy | Do Not Sell My Personal Information | Accessibility Statement
ThriftBooks® and the ThriftBooks® logo are registered trademarks of Thrift Books Global, LLC