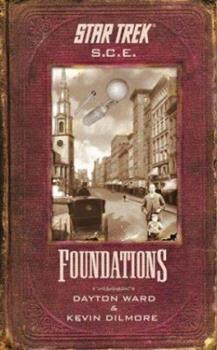 (Book #5 in the Starfleet Corps of Engineers Omnibus Series)

by Dayton Ward and Kevin Dilmore

From a malfunctioning warp drive to the rescue of a runaway starship, there is seemingly no problem beyond the ingenuity of the brave and resourceful men and women of the Starfleet Corps of Engineers. Yet things were different once, when the Corps was new and space was a frontier few had ever crossed.

A different and fascinating facet of "Star Trek"!

Published by Thriftbooks.com User , 17 years ago
I definitely recommend this one for avid "Star Trek" fans who yearn for newer characters and storylines. Even though I grew up with the Original Series Star Trek, I also came to love TNG as well and, later, VOYAGER and ENTERPRISE. Being an avid fan of sci-fi in general, however, it would be an injustice on my part not to mention the many other old and new sci-fi works that both led me to Star Trek and which have forever forged my love for all sci-fi works: "Stranger in a Strange Land", "Puppet Masters", "Foundation", "2001", "2010", "Rendezvous with Rama", "Ringworld", all the "Star Trek" and "Star Wars" books, as well as books as new to the genre as "Advent of the Corps" and others.

Published by Thriftbooks.com User , 17 years ago
The first full-length Starfleet Corps of Engineers novel, "Foundations" is a story that offers something for any Star Trek fan that enjoys passing some time with a good book.Set within a 24th century framing story that sees the crew of the USS da Vinci attempting a dramatic rescue of a runaway vessel, authors Dayton Ward and Kevin Dilmore take the reader back to three key S.C.E. missions set during the 23rd century in a tale that explores the origins and evolution of the Starfleet Corps of Engineers.Utilizing flashbacks to tell a story certainly isn't original but it definitely works well in this instance. Each of the three flashback stories is a complete and interesting story on their own. Ward and Dilmore know how to engage your attention from the opening paragraph of a novel and spin a highly entertaining tale.Originally released as an eBook trilogy in 2002, as a full-length novel Foundations is an even more effect story without the recapping needed when a story is broken down into individual parts. Well paced and carefully plotted, "Foundations" is mighty satisfying reading in a number of ways.The 24th century framing story effectively sets up each jump back to the past while at the same time provides it's own interesting dilemma. Using the same characters, the crew of the USS Lovell, in each of the three flashbacks provides continuity and good flow to the overall narrative while at the same time allowing the reader to get to know and appreciate the characters, particularly Commander Mahmud al-Khaled. Al-Khaled, like the da Vinci's Commander Sonya Gomez, commands a crew of unique individuals you can't help but like.Ward and Dilmore have a real knack for writing dialogue that very effectively brings the individual characters to life. If you are not already a follower of this popular series, then give "Foundations" a try. It's a perfect opportunity to be introduced to a wonderful set of characters that fulfill a distinctive role and provide a fresh and unusual perspective to the Star Trek universe. Best of all, it's a fun read.

Published by Thriftbooks.com User , 17 years ago
This was my first dip in the Starfleet Corps of Engineer world and I have to say I will be swimming again with the crew of the `USS da Vinci.' This is basically three stories that of the initial crew of the SCE and a much younger Scotty.I enjoyed seeing the aftermath of the reckless Captain Kirk as he explored the galaxy. The problems he created and the SCE had to clean up, seemed very realistic and creative. Each adventure felt complete and help extend the adventures of the original Enterprise.Since this was my first step into the SCE, I felt partially at a loss and out of touch with some characters. The book was great and I will be picking up more adventures with the SCE crew.

Published by Thriftbooks.com User , 17 years ago
In this e book series the spotlight is on Scotty and his early days forming the S.C.E. In this tale the Landru computer is reactivated and Scotty must solve the problem. With the help of his engineering friends of course. For all it's worth, it's a good story featuring Scotty as the star of the book. I'd like to see a seperate e book series featuring his early career after this one. Scotty's character can still work with modern readers.I have to give this one five stars and hope it inspires the editors at Pocket books to publish more e books about the original series era with our favorite engineer.

Published by Thriftbooks.com User , 17 years ago
Star Trek - SCE Book #5 Foundations written by Dayton Ward and Kevin Dilmore is the first full length book starring the Starfleet Corps of Engineers. This book is derived from the eBook series from Star Trek: Starfleet Corps of Engineers #17-19."Foundations" gives the reader background into the starting of the SCE back in the twenty-third century the main character in this book is Captain Montgomery Scott now head of the SCE as he reminisis in retrospect abount some of the missions he was on either when serving on the U.S.S. Enterprise or when he was assigned to the U.S.S. Lovell before serving on the Enterprise, which, all in all, makes for interesting reading.The U.S.S. da Vinci is the twenty-fourth century ship with state- of-the-art equipment, but the SCE had a very humble beginning back in the twenty-third century and these are the stories that are told through Montgomery Scott's eyes as he tells us what really happens. As the book starts out there is a run away ion drive on a Senuta ship coming from the Beta Quadrant through Klingon Space and the SCE and the da Vinci is right in its path so they pull along side and begin to correct the problem.This story completes itself throughout the book a segment at a time as the SCE work to solve one problem as the next problem shows its head. There are three main retrospectives throughout the book as you read on. All of these are from writings of Montgomery Scott or his recollections as he is speaking to the da Vinci crew. From the edge of the Romulan Neutral Zone comes a story of a reactor overload due to an ion storm on an asteroid relay station and how it gets solved. The next story is the continuation of what transpired on Beta III when Captain Kirk and the Enterprise left after the Landru incident.The Landru computer turns out to have a few tricks up its sleve and the SCE with Montgomery Scott from the Enterprise are left on Beta III to clean up the mess left by Kirk. This was a very interesting story of how the SCE works to help worlds get back on their feet and the clever ways these engineers work to solve problems. The third story involves uncharted regions of space as the Kelvans are test driving a new warp drive that is much more efficiant and can break the warp limits on speed.This story was very interesting as it showed the resourcefulness of Scotty and his long time friend Muhmud al-Khaled the first director of the SCE. And this story brings into play newer members of the SCE with the older members making for some sparks to fly as they are now in uncharted space and meet some interesting aliens.All in All, I found the book to be an interesting one telling the rest of the story from Kirk's exploites to the nuts and bolts operation of the SCE. I gave this book a solid 5 stars for a tale told well through the eyes of the master engineer himself... Captain Montgomery Scott with help and support from the Starfleet Corps of Engineers. This was a very quick read and the story is divided
Copyright © 2020 Thriftbooks.com Terms of Use | Privacy Policy | Do Not Sell My Personal Information | Accessibility Statement
ThriftBooks® and the ThriftBooks® logo are registered trademarks of Thrift Books Global, LLC