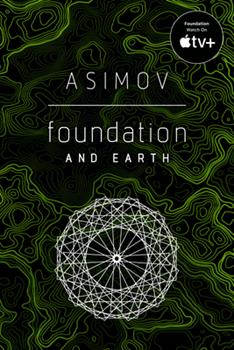 (Part of the Foundation Universe (#17) Series and Foundation (#7) Series)

The fifth novel in Isaac Asimov's classic science-fiction masterpiece, the Foundation series Golan Trevize, former Councilman of the First Foundation, has chosen the future, and it is Gaia. A superorganism, Gaia is a holistic planet with a common consciousness so intensely united that every dewdrop, every pebble, every being, can speak for all--and feel for all. It is a realm in which privacy is not only undesirable, it is incomprehensible. But is...

Gives a reasonably good end to the series

Published by Thriftbooks.com User , 17 years ago
I have to start by saying, read Asimov's "End of Eternity". It is by far his best SF work and may be the best SF novel I've ever read.I think a lot of the reviews have been unduly harsh on Foundation and Earth. I thought this book was engaging and had a pretty good end that has me excited to go read the robot and empire novels. Also, while the book really gave an end to the series in a meaningful way, it did leave open a possible future story that the Asimov estate could allow someone to write.

A Good Ending... or Beginning

Published by Thriftbooks.com User , 20 years ago
I don't know how people can say that Asimov is slipping in this book. I thought it was great! It brings in lots of new planets, and some old ones, too. It finally explains just exactly why Golan Trevize chose Gaia over Psychohistory. It is a great way to end the series. The only thing is that it's written in a way that let's someone, maybe, write another book that could come after this one.The only bad thing about this book is the price and availability. I couldn't believe the price. Then I looked around, and couldn't believe other prices. This book sells for crazy amounts! And then I looked in my library. It had not one, not two, but three copies of this book. Lent out for free. So instead of me paying 19 bucks for a paperback book, I borrowed the hardcover for 3 weeks for free. If you want to be able to reread the book, don't worry: it doesn't get taken out of the library much. Seriously, consider saving yourself 19 bucks, and take a short trip to the library.

Astoundingly deep in its entirety.

Published by Thriftbooks.com User , 22 years ago
Continuing the story of Golan Trevize, after the Decision made in Foundation's Edge, he and Janov Pelorat along with Gaia go around the Galaxy in search of long lost Earth. You really get the feeling of immense age, of such profound history, the closer they come to their goal, which is amazing in itself, but along with that feeling is extreme hope that derives from the future that Gaia offers the Galaxy. You won't realize just how deep this book is until at least days after you've finished it. Purely marvelous.

A good conclusion to the Foundation series.

Published by Thriftbooks.com User , 22 years ago
First off I must say that I am a BIG Asimov fan. I have read (and own) all the Robot, Empire and Foundation novels, as well as The End of Eternity, Nemesis, The Positronic Man, and The Gods Themselves, and most of the short robot stories. I have found all of them interesting at the very least. Please note that I read Foundation and Earth BEFORE Forward the Foundation was written, so my opinion may be slightly different than those who read it after. Foundation and Earth was the last book of the Foundation Series, but did more than finish that line. It tied up many loose ends from the Robot and Empire series as well, and unified these three into a single (if somewhat loosely knit) timeline. Some parts were slow moving, like the main plot, while others were not even really understood until the last few chapters. I thoroughly enjoyed this book, but I suspect I would have done so even more if I had read Forward the Foundation first. Depending on how you interpret the ending, it is either finite of open to change, something I like. I recommend this book to any fans of the Foundation, Robot, or (to a lesser degree) Empire series. One small suggestion, I recommend reading the series in the order of the future timeline, not by the dates which the books were written. All in all I feel this book is a good conclusion to the series.

Brilliant end to the series

Published by Thriftbooks.com User , 24 years ago
I think this is the only Foundation book not in print anymore, and I have no idea why. Not only is this the most important one in the series in the way that it provides a sort of conclusion to everything, it's just a great book. I liked Trevize in Foundation's Edge and we see more to his character here, which is great. We also see more of that fun planet Gaia. I found the arguments between Bliss and Trevize particularly amusing and what was interesting was that Trevize won just about all of them. Give me the Seldon Plan anyday. The search for Earth took up some much of the book, but when we finally get there it's almost anti-climatic (though any readers of Robots and Empire will know what they find long before the characters do). Fortunately Asimov doesn't allow us to dwell on that by springing the top surprise of the novel on us (which I won't say because I don't want to tip any readers off beforehand). In the process he clarifies and adds to his histories and weaves the Robot, Empire, and Foundation sagas even closer together. What more can one ask in a novel, especially from Asimov? Oh, and I heard about the error, but I didn't see anything that seemed wrong. If anybody knows what it is, the curiousity is killing me and I don't have the patience (or the time) to reread the book more carefully. E-mail if you know!
Copyright © 2020 Thriftbooks.com Terms of Use | Privacy Policy | Do Not Sell My Personal Information | Accessibility Statement
ThriftBooks® and the ThriftBooks® logo are registered trademarks of Thrift Books Global, LLC