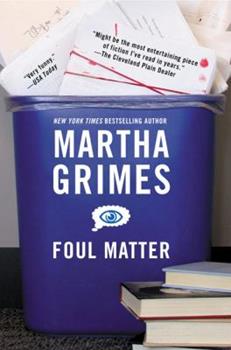 (Book #1 in the Foul Matter Series)

The bestselling author of the Richard Jury novels delivers a razor-sharp and raucously funny send-up of the cutthroat world of publishing. And the praise is pouring in: "A hilarious and wicked caper-adventure on the evils of the book business." -- Pittsburgh Post-Gazette "Does laughing uncontrollably on a subway train constitute legitimate literary criticism? If it does, then Foul Matter ...gets a great review from me." -- New York Times Book Review...

A hoot and a holler

Published by Thriftbooks.com User , 12 years ago
What fun! Martha, you had me giggling, chuckling, laughing, and since I know Pittsburgh, I'll say that the scene in Shadyside is one the Keystone Cops would have savored. Ir deserves to be filmed. I have enjoyed most of the Jury novels for their mystery and wit, but this one has to be the wittiest you have ever attempted...and it was a home run!

Published by Thriftbooks.com User , 14 years ago
Foul Matter turned out to be the best book I have read in a while. It was funny, entertaining and kept me interested from beginning to end. I learned much about the publishing world in this book that really is a story within a story. Well developed characters fill the pages with questions such as "Who is watching who?" I highly recommend this book.

Published by Thriftbooks.com User , 18 years ago
It's not part of her long-running Richard Jury mystery series, but this droll and sparkling satire has so many facets, it's sort of difficult to write a coherent review of it. Let's do it by character: There's Paul Giverney, a best-selling author with a guaranteed million-copy sell-through -- but actually not a bad writer for all that -- and he's thinking about going with a new publisher. But before coming aboard Mackenzie-Hack, he has some conditions that involve Ned Isaly, and that's what gets everybody else's balls rolling. Ned, a writer very highly regarded by the critics, is also incredibly naive about the nuts and bolts of big-money publishing. He lives inside his current work so completely, he'd wander into traffic if his friends didn't keep an eye on him. Saul Prouil, independently wealthy and Ned's neighbor and close friend, published only one novel, a decade ago, because he just can't make himself quite finish all the books he has written since then. But that may finally change. The third writer in the trio is Jamie, a successful writer of genre fiction (any genre) who cranks out two and somethimes three novels a year. She's not "literary" but she's probably the hardest working of the three. And then there's the people on the publishing side, especially Bobby Mackenzie, a shark with no morals or ethics, who hires a couple of hit men to (he thinks) carry out Paul's wishes regarding Ned. And there's Clive Esterhaus, a senior editor at M-H with minimal talent but at least a conscience, and also Tom Kidd, the house's best literary editor -- the best in New York, maybe -- who can do whatever he wants because all the prize-winning authors would follow him unquestioningly to whatever publisher he chose to work for. And Sally, Tom Kidd's assistant, who has kind of a thing for Ned. And not to forget Candy and Karl, the aforementioned hit men, who have to research and approve the subject of any contract before they'll carry it out. And Mort Durban, top author's agent and general jerk, and Sammy Giancarlo, mob figure and author (now in the witness protection program in Chelsea), and even more. Even Swill's and The Old Hotel make great characters. This is simply a marvelous book which, with the right screenwriter, could also be a terrific film. Especially the clown-car antics in Pittsburgh!

Finally something good to read!

Published by Thriftbooks.com User , 18 years ago
If you are fairly literate and want to read something that will entertain you from page one, read this book. If, instead, you prefer a book that is dull as dust, don't bother. (But life is too short to waste time reading boring books.) I'm not a huge MG fan and I really enjoyed this book. I kept trying to steal time to read it. This is good stuff. Buy this book.

A real writer gets fresh

Published by Thriftbooks.com User , 18 years ago
Just when Martha Grimes' Richard Jury mysteries were starting to go flat, she comes up with something so completely different that it shoots her into another category altogether. Literate, funny, and suspenseful, Foul Matter will please her current fans and should find her lots of happy new ones.Paul Giverney writes good, extremely popular novels, and he?s shopping for a new publisher. He likes Mackenzie-Haake, but before he makes a final decision, he makes a demand of acquisitions editor Clive Esterhaus--the publishing house must drop Ned Isaly, one of its most respected literary authors. Clive takes this proposal to Bobby Mackenzie, the Mackenzie of Mackenzie-Haake, who decides that since they have absolutely no reason to drop Ned--and imagine the lawsuit!--it will be more cost effective to hire someone to knock him off. Suddenly Clive is meeting with people in the Witness Protection Program on deserted New York piers, bribing mobsters with book contracts, and hiring the two best hitmen in the business. These guys are so successful that they only whack people they don?t like, which means that they have to get to know Ned before they accept the job. They want two weeks to become acquainted with their mark, an unassuming fellow who is happily surrounded by writer friends. How Candy and Karl, with their unstructured Versace suits (perfect for concealing large weapons without losing their line) and scary manners are going to infiltrate that crowd Clive cannot imagine, but he agrees. The characters are a trip, and placing the book in New York and Pittsburgh (some of the most memorable scenes take place in Pittsburgh) suits Grimes well. One of the topics discussed by Foul Matter?s characters is how to classify fiction, which is obviously something this novel brings up. Here?s Paul, who has written a book that goes beyond his usual genre, lumped in the with same stuff he usually writes. There?s Jamie, who writes readable books within the rigid confines of genre fiction. And there?s Martha Grimes, who with this novel should probably move off the mystery shelf. But where should Foul Matter go? Will the fact that book stores won?t immediately know how to categorize it effect its sales? What?s happening to publishing and to readers who need to have books tucked neatly into categories in order to know what to read? I hope Martha Grimes sticks to her new path. With this novel she shows she is a writer who cannot be categorized. Foul Matter is fresh and funny not to be missed.
Copyright © 2020 Thriftbooks.com Terms of Use | Privacy Policy | Do Not Sell My Personal Information | Accessibility Statement
ThriftBooks® and the ThriftBooks® logo are registered trademarks of Thrift Books Global, LLC