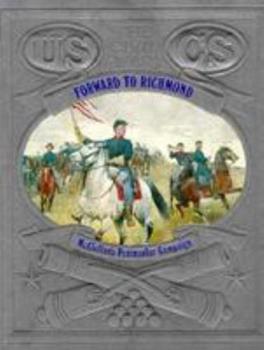 (Book #5 in the The Civil War Series)

This volume is one of a series that chronicles in full the events of the American Civil War, 1861-1865.

Published by Thriftbooks.com User , 17 years ago
I am a Civil War buff, having visited numerous battlefields and read many, many books on the topic. This volume serves nicely as an introductions to General McClellan and his role in re-building the shattered Union Army after the First Battle of Bull Run in the summer of 1861. It does a great job of describing the build-up to McClellan's Peninsular Campaign, which was his attempt to do a waterborne end run around the Confederate Army that was guarding Richmond, the Confederate capital. However, I feel that it is mistitled because it only covers the first half of the Peninsular Campaign. The text stops when Lee takes over for the injured Joe Johnston so we read nothing about the conclusion of the Peninsular campaign, including a majority of the battles. The book is beautifully illustrated and well-written. A novice to the Civil War will learn a lot, but even this old dog learned a couple of new things with this one.

The Young Napoleon falls to take out Granny Lee

Published by Thriftbooks.com User , 21 years ago
"Forward to Richmond" is certainly an ironic title for this volume in the Time-Life Civil War series that focuses on the Peninsular Campaign since this particular military fiasco was General McClellan's attempt to do an end run around the Confederate army. Because the topic is limited to a single volume, Ronald H. Bailey (and the Editors of Time-Life Books) cannot go into much depth in terms of the specific battles of the campaign, so you do not get as much detail as you do in those volumes on specific battles like Shiloh or Gettysburg. Chapter 1, "A Young Napoleon," provides a concise biography of the Union Army's commanding general as well as his efforts to train his troops to become soldiers. Chapter 2, "Clash at Ball's Bluff," relates the second defeat in battle suffered by the Federals (after First Manassas) because of unseasoned officers, failures of communication and a poorly run command structure. Chapter 3, "The Troublesome Commanders," looks at how the South was as much troubled by Beauregard's inactivity with the Confederate army as Lincoln was plagued by McClellan's slows with the Federals. Chapter 4, "'Stride of a Giant,'" covers the beginning of the Peninsular Campaign, with the Army of the Potomac finally breaking out of its confinement south of Yorktown. Chapter 5, "Victory Within Reach," makes a strong case for how McClellan snatched defeat from the jaws of victory. Chapter 6, "Stalemate in the Swamp," relates how the Battle of Seven Pines ended in a stalemate that still forced the Army of the Potomac to end the campaign. I for one would much rather have seen this book split in half, with the first three chapters turned into a volume that talks about how both sides were looking for commanding generals and the second dealing with the actual Peninsular campaign in considerable more detail. Being bottled up on the end of the James Peninsula is worth an entire chapter. All of these volumes make excellent use of contemporary photographs and illustrations, but "Forward to Richmond" contains many fine examples of watercolors from the time period. Whatever the shortcomings of the text, the accompanying images are first rate.
Trustpilot
Copyright © 2022 Thriftbooks.com Terms of Use | Privacy Policy | Do Not Sell or Share My Personal Information | Accessibility Statement
ThriftBooks® and the ThriftBooks® logo are registered trademarks of Thrift Books Global, LLC