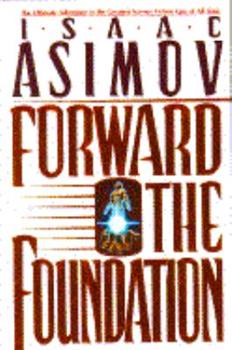 (Part of the Foundation Universe (#12) Series and Foundation (#2) Series)

A stunning testament to his creative genius.Forward The Foundationis a the saga's dramatic climax -- the story Asimov fans have been waiting for. An exciting tale of danger, intrigue, and suspense,Forward The Foundationbrings to vivid life Asimov's best loved characters: hero Hari Seldon, who struggles to perfect his revolutionary theory of psychohistory to ensure the survival of humanity; Cleon II, the vain and crafty emperor of the Galactic Empire,...

A fitting close to the Foundation series

Published by Thriftbooks.com User , 18 years ago
It's a prequel, of course, but in realtime it was the last book written in the series.Strictly _as_ a Foundation book, I don't think this one is quite as strong as its immediate predecessor, _Prelude to Foundation_. It's good, all right -- but it's not very tightly unified, the writing is sloppy in places, and it introduces a few things that seem to contradict the original series at certain points.What really makes this four-vignettes-plus-an-epilogue volume so engaging is that in it, Hari Seldon has clearly become a literary alter ego for Asimov himself. And Asimov was well aware as he wrote it that he hadn't long to live.And _that_ suggests that in writing about Dors Venabili, Wanda Seldon, and psychohistory, Asimov was "really" _also_ writing about his wife Janet Jeppson Asimov, his daughter Robyn, and his own literary oeuvre. So completely aside from its value as an SF novel (or, really, a story collection), it's also of great interest for the light it sheds on Asimov himself.Asimov is generally credited with three autobiographies: _In Memory Yet Green_, _In Joy Still Felt_, and _I. Asimov_ -- the last being my personal favorite because it's the most introspective and revealing of Asimov's character. (Excerpts from all three, plus some further surprising revelations that you've probably heard about by now, are included in Janet Jeppson Asimov's _It's Been a Good Life_.)But there's a case to be made that he wrote a fourth volume of autobiography, and that this is it. At the very least, this work of ostensible fiction is almost as revealing of Asimov's character and end-of-life concerns as any of his nonfictional autobiographies.For that alone, it will be of interest to every Asimov fan. May the Good Doctor rest in peace.

Forward the Foundation-Filling in the Gaps

Published by Thriftbooks.com User , 18 years ago
Isaac Asimov is, in my opinion, the greatest modern science fiction writer. His crowning achievement, the Foundation series, is widely aknowledged to be one of the greatest Sci-Fi series of all time. The series, Prelude to F-, Foundation, F- and Empire, Second F-, F-'s Edge, and finally Forward the Foundation, is the consummate of some 40 years of intermittent "dabbling" in the series. For this reason, there are, as can be expected, some continuity problems with the plot line. However, Asimov's skill as a storyteller through the characters is unparalleled in the genre. He is able to weave from words great characters such as Salvor Hardin, Hober Mallow, Lethan Devers, Bayta and Arkady Darrell, Stor Gendibal, Sura Novi...chracters as human as they are fictional. His greatest character, however, is Hari Seldon. Forward the Foundation represents Hari Seldon. It continuies the job of tying together all of Asimov's major novels begun in Foundation's Edge, and gives a sense of resolution, while only describing events that occur 500 years prior to those in Foundation's Edge. This book is not without flaws...though for it's insight into one of the greatest fictional characters of all time, I highly recommend it.

The life of Hari Seldon

Published by Thriftbooks.com User , 19 years ago
This novel begins eight years after Prelude to Foundation, and it is chronologically the second novel in the seven that Asimov wrote. I think this just might be the best novel Asimov wrote, and it happened to be completed just before his death. The novel consists of four parts, each separated by about ten years. This is really about Seldon, and the path his life takes. In the first part, many things are simliar to Prelude, the Empire is falling to pieces, an old friend from the Robot series is the person functionally running the empire, and psychohistory is still just a fledgling science. He and his wife, who is his protector (appointed by Daneel Olivaw), have adopted the young boy they encountered in Prelude. The events of this first part see the departure of Daneel, with Seldon being unexpectedly elevated to fill his position.Part two deals with Seldon's life as a political functionary, running the dying empire while trying to hammer out psychohistory so that he can save humanity. Again, a major character exits the scene, but not quite as one might expect. This results in Seldon exiting politics and focusing solely on his work in part three. Governmental authority has been assumed by the military, and psychohistory is finally able to make some predictions. Hari loses an old friend and his family uncovers a plot to kill someone, they think Hari is the target. While the plot twists a bit in this part are VERY well done, the end is really tragic. This time Hari lost the most important person in the galaxy to him.In part four, Hari is essentially all alone, with only his granddaughter remaining of all the friends and family he once had. His son and daughter-in-law each meet unfortunate fates, while the capital planet Trantor is now feeling the decay that the empire as a whole has felt for some time. Hari is forced to make some decisions that enable the second foundation to be created, though it also costs him someone dear. The ending is as one might expect, the death of the great one, as readers of the series would know. He manages to wrap things up in time, at least enough to set things on the track that psychohistory saw fit, and that the second foundation can steer.I really think this was a story of Asimov himself in many ways. It deals with a brilliant man, recognized as such during his own lifetime, who deals with the loss of his friends and family as he outlives them all. But still he works. And he dies while working. Asimov himself said that he identified with Seldon more than any of his other characters, and after chronicling the life and death of Seldon, Asimov himself died. He is already sorely missed.

After the robots before the Foundation

Published by Thriftbooks.com User , 22 years ago
This was Isaac Asimov's last novel; he died in April of 1992. This book, a part of Asimov's noted Foundation series, concerns events taking place between "Prelude to Foundation" (1988) and "Foundation" (1951) and helps pull together those two books. It consists of a series of four stories, each taking place at a different time in the life of the mathematician Hari Seldon. The first story ("Eto Demerzel") begins about eight years after the end of "Prelude to Foundation." Seldon's work on his mathematical theory of psychohistory is going slowly. He finds that he has to assist the First Minister of the Empire, Eto Demerzel, in defeating a populist demagogue. (A new Foundation trilogy was begun in 1997. "Foundation's Fear" by Gregory Benford takes place between the first and second stories in "Forward the Foundation." Greg Bear's "Foundation and Chaos" and David Brin's "Foundation's Triumph" also take place within the time frame of "Forward the Foundation") The second story, "Cleon I", takes place ten years later. Seldon is now First Minister of the Empire and he finds that he and his adopted son, Raych, must defeat the remnants of an opposition group and stop an assassination attempt. In the third story, "Dors Venabili", occurring about ten years later, Seldon and his wife, the historian Dors Venabili, must quelch the designs of a ruthless military junta that is governing the Empire as well as detect and stop someone within the psychohistory project from taking it over. In the last story ("Wanda Seldon"), about six years later, Seldon and his granddaughter Wanda must find a way to obtain funding to continue the research after Hari Seldon dies. He soon comes up with the idea of two, independent Foundations whose goal it is to return the Galaxy to his former glory after the upcoming millennia of dark ages. In addition to these four stories, there is a short Epilogue that takes place two years after the end of Part I of "Foundation" (1951). This series has had an enormous impact in the history of science fiction and all serious students of science fiction literature should be familiar with all of the books in the series.
Copyright © 2020 Thriftbooks.com Terms of Use | Privacy Policy | Do Not Sell My Personal Information | Accessibility Statement
ThriftBooks® and the ThriftBooks® logo are registered trademarks of Thrift Books Global, LLC