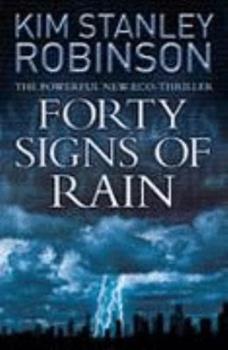 (Book #1 in the Science in the Capital Series)

This description may be from another edition of this product. The bestselling author of the classic Mars trilogy and The Years of Rice and Salt presents a riveting new trilogy of cutting-edge science, international politics, and the real-life ramifications of...

Published by Thriftbooks.com User , 14 years ago
Kim Stanley Robinson has mastered the art of producing fully three dmensional characters. Even the minor characters appear as fully vivid human beings. The scenes are described with a vitality that gives you the impression of experiencing the environment first hand. The air is vibrant and alive with the fragrance of the moment os Robinson describes an Autumn scene. The narrative is a real page turner. It is difficult to close th book and turn off the lights to go to sleep.

A scientifically solid cornerstone with more to come

Published by Thriftbooks.com User , 16 years ago
Robinson presents us with a masterful explication of the challenges that global warming, ocean desalinization, breakup of the Arctic ice pack, and related calamities present for us in today's world. This isn't some far-out science fiction catastrophe novel, but more of a popularization of current scientific thought. Without doing any actual fact-checking (we trust that the author isn't making up all his figures here) Robinson presents a compelling and believable story that could take place any time now. As he did so successfully in his "Mars" series, Robinson takes great pains to humanize his scientists, presenting them as real people facing everyday problems even though they spend much of their time trying to save the world from destroying itself. To this end, we get pages and pages of details about the personal lives of the men and women who struggle with global scientific issues from 9 to 5 but then still try to live their own lives the rest of the day. Those who expect whiz-bang action and adventure from their fiction will find the first two thirds of this book pretty tedious, as the heroes phone their spouses and pick up their kids, etc... But Robinson proves himself a master of suspense, keeping us anxiously turning pages, not so much because of what's happening as because we sense what's coming. Since this first installment is more setup and character study than action, readers will have to wait for more before passing judgment on the entire series. But count me in for the sequels - this one promises to be too good to miss.

Published by Thriftbooks.com User , 16 years ago
...but I did.Based on many of the reviews here, I was dubious about reading this but decided to give it a swing. I am so glad I did.This book is peopled by some genuinely endearing characters, almost all of whom are aware of the danger to the planet of global warming.It is a sad comment that because a book doesn't "jump" out of the gate, it is not a good book. Folks, this is a book...not TV.The pace is slow but definitely interesting. I think what Mr Robinson may be doing here is trying to get us to have a good sense of the ordinariness of the lives of the characters of this book and to recognize that when trouble comes it won't be with trumpets and obvious dire warnings. The warnings are here and they are now. The serious trouble is a sum result of several parts. Probably has something to do with the title "Forty Signs of Rain"In any case, I really enjoyed this and it has given me a lot to think about. If you enjoy a talented writer who knows when to take his time, a cast of genuinely likeable (though, at times flawed) characters, and can get into reading a novel that may open your eyes to some problems we are going to have to face in the future, then read this.

It may float your boat, or not.

Published by Thriftbooks.com User , 17 years ago
I really liked this volume, keeping in mind that it's the first of a trilogy. It probably could have been tightened up, sure; and if you're not a parent, there's probably some stuff you couldn't care less about. But I am a parent of two small children, and I *loved* all the touches he added in that regard. Most of the time, if characters in novels have kids, they're completely peripheral, which, as any parent knows, is entirely NOT how your life is when you have children. Because it's the first of a trilogy, I think a lot of what the other reviewers complained about will end up just being setup for the next two, though it doesn't feel that way when you're reading it. I ended up reading until about 1:30 am because I couldn't stop. Robinson's characters are very real, and while there's not a lot of conflict in the novel, that's kind of a nice change from the usual. Sometimes it's nice to read a book that doesn't have 10000 events in each chapter, and just relax with the characters.

Can't wait for the others!

Published by Thriftbooks.com User , 17 years ago
This is the best new book I've read this year. I don't know what the book reviewers are on about - maybe they object to the many references to breastfeeding and breast milk. To me, they signify the most essential human relationship that exists, and also echo the relationship between humans and mother earth. This book has some of the best drawn characters that I have encountered - ever. For that alone I would give it five stars. It also has a great story, and delves into philosphy and science in a way that is not pedagogicor preachy. KSR's explanation of the place of mathematics is elegant. What a wonderful teacher he would be. This book does not perhaps stand on it's own, but neither is it intended to. The images and ideas I grasped from it will be with me until the next book comes out. Perhaps the other reviewers expected another Red Mars - this is different, not as dense or serious - but just as good.
Copyright © 2020 Thriftbooks.com Terms of Use | Privacy Policy | Do Not Sell My Personal Information | Accessibility Statement
ThriftBooks® and the ThriftBooks® logo are registered trademarks of Thrift Books Global, LLC