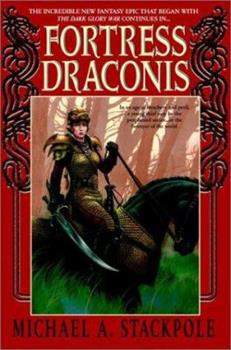 The incredible new fantasy epic that began withThe Dark Glory Warcontinues in... Fortress Draconis In an age of treachery and peril, a young thief may be the prophesied savior ... or the betrayer of the world. From Michael A. Stackpole,New York Timesbestselling author and a master of epic fantasy, comes a stirring chronicle of magic, intrigue, passion, and the most unlikely of heroes... Once one of the grandest of human cities, Yslin now has a dark...

one generation after the prelude novel [no spoilers]

Published by Thriftbooks.com User , 17 years ago
"Fortress Draconis" is the first novel in The DragonCrown War Cycle series approximately one generation following "The Dark Glory War" prelude novel. It is a spectacular book filled with creative battles, detailed descriptions, and interesting characters. One could understand the novel without having read the prelude, but the continuing characters have a history and the small details will be lost on those who don't invest the time. There is mystery on other individual fates from the prelude novel, hopefully to be resolved in the future novels. It is curious to note how countries and people change and/or remain the same over the 25-year difference. I found the novel better than the predecessor in all things. It has imaginative magic and great encounters. Two youngsters, Kerrigan and Wilburforce, are interesting to follow as they mature with the events unfolding, likewise Alyx with her unusual background. General Androgans and Dranae are intriguing enigmas while Resolute and Kedyn's Crow form an awesome fighting duo with personal limitations. I highly recommend this series to any fan of the fantasy genre and look forward to reading the future novels. Thank you.

Published by Thriftbooks.com User , 19 years ago
This book is the second in a very compelling series. I am a very picky reader and I tell you this is a GREAT book written by an ever better author. Michael Stackpole is one of the best authors I have ever read. Why every Sci Fi/ Fantasy fan in the world does not buy this and his other books, I will never understand. Not since Robert Jordan's Wheel of Time have I been so swept away by the story and characters of a novel. Not to mention, Michael has the courage to let his story go somewhere (WoT fans know what I mean). I tell you this, if you don't by this book and other Stackpole works, you are really missing out. Also, if you are a fan you will NOT be disappointed. This book is just as deep and compelling as his other novels.

Published by Thriftbooks.com User , 19 years ago
Being the first book in the Dragoncrown trilogy, Fortress Draconis takes place 25 years after the Dark Glory War. In the end of that book, we see nearly all of that generation's heroes perverted into the service of the evil queen of the north, Chytrine. The only one to escape was the previous novel's narrator, Tarrant Hawkins. Having been named a coward and a traitor, for being the only one to return, he now goes by the name of Kedyn's Crow (Kedyn is the God of Warriors in this world). While there are several notable characters from DGW making significant contributions to this work, the focus is really on three new heroes for this age. Will, an orphan turned street thief, may just be the crux of the entire war against Chytrine, based on a prophecy from the prequel volume. Kerrigan is a young wizard who has been bred and trained to be better than any other human wizard in memory, yet his sheltered upbringing may be his own doom. Alexia, whom we saw in DGW as an infant barely being rescued from the invading forces, has grown into a true warrior princess, having been raised among the Gyrkyme, half-breeds of elves and giant birds.This novel takes the reader to many of the same places as in DGW, allowing us to see the effects of time. While some places have improved in the previous quarter-century, others have decayed. Those characters who were of good character still are, while those whose might have been questionable have only grown worse. The armies of Chytrine have grown more powerful, mostly due to the larger number of Generals, the evil-perverted, magically-altered heroes of the previous age. Also, her technology has grown further. Whereas in the first novel, she had but one cannon, the first usage of gunpowder in this fantasy world, now there are musket-like weapons and cannons abounding, for both sides, but she manages to have innovations to counter the growing armories of the good. As before, there is the presence of magic, but it is not overwhelmingly done. Again, Stackpole gives us some characters to love, some to hate. It is difficult that now some of those to hate were just the opposite in DGW. Again, we have a depressing ending, but one that can be seen coming from a great distance. But never fear, a provision was made earlier with the character Resolute in regards to a certain magical enchantment. Comeuppance will be delicious. As far as fantasy novels that have been published recently, I rank this easily among the top of any author out there. You get all the elements you might want from a fantasy novel, and you get a LOT of it, with over 500 pages to satisfy you. Happy reading!

Published by Thriftbooks.com User , 20 years ago
Fortress Draconis lives up to the promise of a great tale started in The Dark Glory War. It is a book that stands alone however, not requiring you have read the prequel to understand this storyline as it takes place 25 years after the original. I did read the Dark Glory War first, however it was a year or so ago, so after reading Fortress Draconis I read it again and enjoyed the foreshadowing present in the first book that I didn't catch the first time. Michael Stackpole is one of my favorite authors now. I first ran into his work in the X-wing novels of the Star Wars universe, then moved on to his fantasy novels and work in Battletech because I enjoyed his writing so much.If you haven't read anything by Mr. Stackpole, give this one a shot and you'll be hooked. If you enjoy Robert Jordan (as I do) give this book a read as the world here is just as rich and deep, with the action coming even more quickly and the plot twists being just as good.

Published by Thriftbooks.com User , 20 years ago
Finally, after a year and half long wait; Stackpole gives us the sequel to classic epic fantasy, Dark Glory War. Fortress Draconis is very impressive military fantasy epic set 25 years after the events told in the first book.A young thief, Will is caught trying to steal a strange artifact and is saved by two mysterious warriors: One is Vorquelf called Resolute who is determined to free his land from the tyranny of the evil sorceress Chytrine and the other is shadowy human warrior called Kedyn's Crow.Will finds out he is center of a prophecy where he will defeat Chytrine and her terrifying forces. This epic novel has unforgettable characters like Princess Alexa who is obessed in freeing her own homeland from Chrytrine. Kerrigan Reese, the young wizard who is born with powers far above normal humans but is also naivete on the ways of the world. General Adrogans, who's pompous outward personality hides a brilliant military mind.Stackpole's skills in the world-building department shine in every page as he gives you guided tour of his wartorn world and the various races that live there like Vorquelf elves who battle their ouw prejudices against wing-people called Gyrkymewho they share a tragic history with. The human nations who must rally together to battle Chytrine's menace. Stackpole also succeeds in his vivid and brutal descriptions of battles as you see our heroes fight the Chytrine's terrifying army of monsters like the dreaded Sullanciri, beings who were once human now are souless monsters created by Chytrine's twisted magic! Finally our heroes adventures will take them to fortress Draconis where they must stop Chytrine from getting a piece of dragoncrown in which she will use to control dragons! So pick up this book and travel will Will, Resolute, Crow and Princess Alexa as they battle for the lives against evil Chytrine and don't forget the surprise on the last page!
Copyright © 2022 Thriftbooks.com Terms of Use | Privacy Policy | Do Not Sell My Personal Information | Accessibility Statement
ThriftBooks® and the ThriftBooks® logo are registered trademarks of Thrift Books Global, LLC