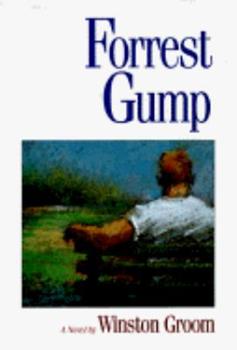 (Book #1 in the Forrest Gump Series)

The modern classic that inspired the beloved movie starring Tom Hanks. Six foot six, 242 pounds, and possessed of a scant IQ of 70, Forrest Gump is the lovable, surprisingly savvy hero of this classic... This description may be from another edition of this product.

Off the Scale Funny

Published by Thriftbooks.com User , 18 years ago
While I was reading it (I had seen the movie prior), I thought that the movie followed the book about one third or even one half of the way but then the book just took off in a ninety degree turn and it was one incredible adventure after another - and I mean incredible literally. It has to have been one of the funniest things I have ever read. At the time, I thought it was as if the author thought mid-way through the book 'Heck, I'm the author - I can do whatever I want' ... and did. The unbridled imagination is thoroughbred. Best thing to do is get the movie and the book and compare them. The movie is first rate but the book is exquisitely funny - much more than the movie.

Through The Eyes of a Dummy

Published by Thriftbooks.com User , 18 years ago
Winston Groom depicts the adventures of a dim-witted country boy in his novel, "Forrest Gump." Groom writes the novel in a first person perspective, as if Forest is reminiscing on his past. He even uses the poor grammar and broken language of such a dense narrator. He recounts all of his life achievements and failures. He describes everything from his fame of being a football and wrestling star, to his struggles with the love of his life, Jenny Curran. The thing that impressed me the most was the point of view. The entire book is written in the dialect of this easy speaking wholesome character. The language connects you to Forrest and puts you in his shoes. You can see how Forrest experienced these events and the reactions of the people he comes in contact with. He naively explains these reactions and events, which is a subtle way that the author relates to the reader without sacrificing Forrest's stupidity. The novel is lined up with story after story that all intertwine together. Every amazing adventure is followed by another. And Forrest's genuine and innocent narration of these events never leads the reader to question the character's honesty. As a side note to movie patrons, don't disregard this book because you have seen the movie, there are many differences between the two. And seeing all the events through Forrest's eyes allows an even greater connection to the character. I enjoyed every page of this book and I hope you do too.

Far beyond the movie

Published by Thriftbooks.com User , 21 years ago
This book was excellent to read. I laughed many times because of the exaggerated Gump actions and events. This book is far different than the movie and much better. Don't get me wrong, the movie was good but this has no comparison. If you thought Forrest was funny in the movie you will love this book. I consequently read this book in one day because I didn't want to stop laughing. If you want humor read this book.

This is one of the best I have ever read.

Published by Thriftbooks.com User , 22 years ago
"Let me say this: Bein a idiot is no box of chocolates." These are the opening lines of Forrest Gump. This is a great book in every aspect imaginable. From college football, to the Vietnam War, and even the game of Ping-Pong, this book has everything to offer. From the introduction of the book till the end, I was laughing. My favorite part of the book would have to be in the beginning when Forrest's father is mentioned. Because his father is killed by a large load of bananas, which fell upon him, this starts the nonsense. The story uses the first person point of view through Forrest's eyes, which lets you see how he views the world. Although he is considered an idiot by his IQ of seventy, his thoughts make you think of who the really idiots are. Forrest is a great character because he does not really care what people think about him. Even if he knew that a person did not like him, it would not really bother him. Another original trait of Forrest is that he acts on instinct instead of reason, which leads to a few embarrassments. For example, when he was honored as being one of colleges' best football players, his first words were that he had to pee. Forrest is also an excellent character because you see him advance in life from a boy into a man. His life is full of barriers, which society has placed upon him and he is able to surpass them all. Forrest also experiences ups and downs of true love through his best friend Jenny. Jenny was the only girl Forrest's age who gave him a chance. Since they both needed a good friend, they were meant for each other. The movie Forest Gump does not compare to the novel. I feel that the book is a lot more detailed and it even adds a few more scenes. The book is also more humorous than the movie because you have to use your own imagination to visualize what is really going on. This is probably the funniest book I have ever read. I have never experienced a book like this in which every other page creates an amusing venture. I would definitely recommend this novel to anyone who likes a book that will keep them reading and have them strive to get to the next page.

This Book Is Magnificent

Published by Thriftbooks.com User , 23 years ago
I read "Forrest Gump" right after I saw the film. The film was great and I really enjoyed it calling it one of my favorites. I was surprised what happened in the book, though I did really love it. The book is a lot funnier than the movie but I think the movie was made very well. The only thing better about the movie was the ending. They bot are kind of downers but the movie's ending is better. The book was great! I laughed many times and I have begun reading it again. A first for me. I recommend this book, but remember it's not like the movie.

Forrest Gump Mentions in Our Blog