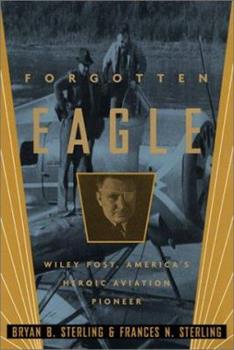 by Bryan B. Sterling and Frances N. Sterling

"Forgotten Eagle" follows the daring exploits and eccentric life of the pilot aviation history has forgotten--the first man to fly a single engine plane solo around the world. 50 photos.

Gives a more thorough account of the aviation pioneer

Published by Thriftbooks.com User , 14 years ago
Unlike other aviation pioneers Wiley Post could not seem to translate his record-making flights into financial security for himself and his family and so he always seemed to push himself further and further in order to accomplish something that would place himself in a position where he could write his own ticket. This push nearly ended his life more than once and certainly contributed to the tragic accident in Alaska which ended his story. The authors did a wonderful job on this book, researching Wiley's background and putting everything in perspective for the reader. The deliberate sabotage attempts on several of Wiley Posts flights is something I was not aware of and which I felt could have been pursued more. Certainly a book for those who want to know more about this early flier and American hero.

Published by Thriftbooks.com User , 19 years ago
This biography is carefully researched, with the footnotes where they belong--at the foot of the page. The authors have done a lot of research and their telling of the dramatic life and feats of Wiley Post makes for a fascinating book. The account of the two round-the-world flights is full of awesome momnets. There is a lot of technical flying data, and for the non-flyer this gets a bit long, as does the exhaustive account of the events following the crash on Aug 15, 1935. From the time that Wiley Post dies there are still 120 pages in the book, but much is interesting and the account of the world-wide grieving is poignant and well-done. There are good illustrations, tho also I would have liked a map of the the area where the crash occurred. But overall, this book tells the story well, and is well worth reading if you are interested in the life of a daring and gutsy early flyer, who should be remembered.
Trustpilot
Copyright © 2022 Thriftbooks.com Terms of Use | Privacy Policy | Do Not Sell or Share My Personal Information | Accessibility Statement
ThriftBooks® and the ThriftBooks® logo are registered trademarks of Thrift Books Global, LLC