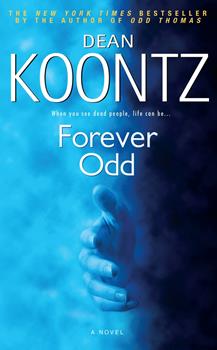 (Book #2 in the Odd Thomas Series)

Every so often a character so captures the hearts and imaginations of readers that he seems to take on a life of his own long after the final page is turned. For such a character, one book is not enough--readers must know what happens next. Now Dean Koontz returns with the novel his fans have been demanding. With the emotional power and sheer storytelling artistry that are his trademarks, Koontz takes up once more the story of a unique young hero...

Published by Horror crazy , 6 months ago
That headline is no joke! I love Odd Thomas, but this first sequel might be the first time, at least in LITERATURE, that I have come across a sequel that is better than the original! After Odd Thomas’ childhood friend is abducted on the night of his father’s murder, it is up to Odd to use his unique talents to follow the kidnappers’ trail to an abandoned hotel and casino on the outskirts of Pico Mundo. In fact, his enemies have warned that the consequences will be dire if Odd doesn’t show up alone. Once there, Odd finds himself facing the deadliest predators and engaging in a suspenseful, terrifying game of cat and mouse in which the lives of he and his kidnapped friend hang in the balance. Dean Koontz once again balances suspense, terror, humor, and adventure to give readers an exciting, enjoyable, and unforgettable experience! If you’re a fan of Odd Thomas who is wondering whether or not you should read the entire series, Forever Odd will definitely help you come to a decision. You just might, in fact, find that the other books are “must-reads!”

Published by MrsEasley , 2 years ago
Had to read this one cause I loved the 1st book. While it's a good read to me it was a little slow but it finally gets going.

I Must be Odd

Published by Thriftbooks.com User , 15 years ago
I must be the odd one out; but, I loved this book. Forever Odd was fun to read; that's my barometer of a good book. Forever Odd was nonstop suspense in the most interesting settings: the underground waterway, the old hotel, the crawl spaces under the building. I could picture Odd in all of these scenarios and I liked seeing how he planned to escape from each dangerous predicament he encountered. The villains were more believable to me than that in Brother Odd. We can all relate on some level to the selfishness and materialism that is Datura. Maybe most readers want a book with more dialogue, more philosophy, more long, drawn-out boring conversations. Forever Odd is not the book for these people. This book is for someone who wants fun escapist fiction in which Odd faces perilous situations and uses his wits to come out on top. While not as epic as Odd Thomas, this was a worthy addition to the series.

Published by Thriftbooks.com User , 16 years ago
Publishers Weekly calls Dean Koontz a master storyteller, and in my view, they're right on target. I've read him for over 30 years and was hooked with "Whispers", absolutely one of the creepiest books ever written - and I mean that in a good sense. I still get goose bumps over that one. Odd Thomas is exactly what his name implies. Why? Because he can see dead people. Although they can't verbally communicate with him, Odd manages to figure out what's troubling these spirits who, for whatever reason, choose to stay behind. In this installment, Odd has taken a leave of absence from his job as a fast-food cook and is grieving the death of his girlfriend, Stormy. Elvis Presley's ghost is still hanging around and Odd can't figure out how to help him. When Odd is visited by the spirit of Dr. Wilbur Jessup, he immediately goes to his house, where Odd's best friend, Danny, lives. There, he discovers Dr. Jessup's battered body and that his friend is missing. Danny has what is known as brittle bones disease and is deformed because of this, and Odd fears for his friend's life. Suspecting that Danny's biological father has taken him, Odd employs what he calls psychic magnetism to guide him toward his friend. He is lead to a fire-damaged casino, where Odd faces off against Datura, a mentally deranged woman, and her two powerful male companions who kidnapped Danny in order to draw Odd to them. Datura is fascinated by the occult and suspects Odd is a witch doctor. Before the day is through, she means to steal his spirit. That last sentence is probably an exaggeration but that's the point I took from the book. As always, Koontz gives the reader a compelling story, which takes place over one day. His ability to vividly and realistically portray evil characters does not falter with this book. Odd is an engaging character who accepts his "burden" with grace and tries to encourage those spirits he encounters to cross over into the next life. I look forward to more in this series.

Published by Thriftbooks.com User , 16 years ago
Koontz should do nothing else from now on but tell the story of Odd Thomas. I thought this was a totally enjoyable and intriguing follow-up to Odd Thomas. What is missing, i suspect, for many readers was the love story Odd had with Bronwyn, which was heart-wrenching and beautiful and likely not repeatable. I expect Koontz to write at least twelve more Odd Thomas books or I will yell and scream like Datura.

Published by Thriftbooks.com User , 16 years ago
In FOREVER ODD, author Dean Koontz continues the story that he began in ODD THOMAS. Odd Thomas is a kind and gentle young man of twenty-one. Odd is the name he was given by his parents at birth and he's even more unusual than his name suggests. He lives in a world that would be terrifying for most people, but his gentle nature and belief in God has made his life bearable. Odd can see dead people who have passed away, but continue to stay in the world of the living. Most of them are troubled spirits who have something that they want to reveal and seem afraid or unable to move on. The spirits don't speak, but sometimes he is given a glimpse of their past lives and what it is they are seeking. Odd tries his best to help these lost souls in any way that he can. Odd's character is charming and his sense of humor helps him deal with life. One spirit, who frequently visits Odd is Elvis Presley. Odd believes that the spirit of Elvis stays because he is afraid of meeting his mother in the afterlife. He fears her disappointed in the man that he had become. Only a few close friends know about Odd and his unusual gift. This story concerns a friend named Danny who reveals the truth about Odd to impress Datura, a beautiful woman. She proves to be a cruel maniac who is obsessed with death and the occult world. Datura wants to control Odd and force him into teaching her how to summon the dead.

Published by Thriftbooks.com User , 17 years ago
In Pico Mundo, California lives a man with two powerful paranormal gifts. He can communicate with the dead and using psychic magnetism that can visually hone in on whoever he is looking for. One night Odd Thomas sees Dr. Jessup; he knows that the man is dead and that his adopted son Danny is in terrible danger. When he reaches the Jessup home, he finds the battered body of the doctor on the floor but Danny is nowhere around. His psychic magnetism leads him to the tunnels of the Maravilla Flood-Control Project where Danny and his kidnapper traveled. He eventually finds the trail that leads him to the destroyed Panamint Resort and Spa Casino where explosives are taped on Danny. The ringleader Datura used Danny as bait to get Odd to the casino because she wants him to produce a ghost for her. As back-up she has two strong men under her spell to do her bidding. Odd saves Danny hustling him into a safe place while he plays with these vicious hunters in the hopes that a plan for getting Danny and him free of these psychopaths will come to him. This novel takes place a year after the events in ODD THINGS and readers find the vulnerable, likeable, and emotionally drained Odd Thomas still working with the authorities to put the bad guys behind bars. The villainous woman whose beauty hides an ugly heart and soul will creep out the reader with her perceived belief that she does the right actions. Dean Koontz is at the top of his genre with a sequel that his myriad of fans will treasure. Harriet Klausner
Trustpilot
Copyright © 2022 Thriftbooks.com Terms of Use | Privacy Policy | Do Not Sell or Share My Personal Information | Accessibility Statement
ThriftBooks® and the ThriftBooks® logo are registered trademarks of Thrift Books Global, LLC