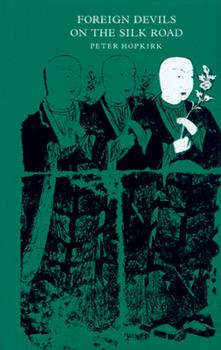 Foreign Devils on the Silk Road: The Search for the Lost Cities and Treasures of Chinese Central Asia

The Silk Road, which linked imperial Rome and distant China, was once the greatest thoroughfare on earth. Along it traveled precious cargoes of silk, gold and ivory, as well as revolutionary new ideas. Its oasis towns blossomed into thriving centers of Buddhist art and learning. In time it began to decline. The traffic slowed, the merchants left and finally its towns vanished beneath the desert sands to be forgotten for a thousand years; however,...

Yes Virginia, there really was an Indiana Jones

Published by Thriftbooks.com User , 15 years ago
This book is about the first explorers and archaeologists to make it to the most remote parts of Central Asia, where, in areas like Taklamakan, once upon a time before climatic changes, prosperous Buddhist, Nestorian Christian, Chinese, Greek and Hindu civilizations thrived along the trade routes between Cathay and ancient Rome. Taklamakan was surrounded on three sides by vast mountain ranges almost twice as high as the European alps; on the last side was the vast Gobi desert. A hundred years ago, there were no roads, cars, airplanes, radios, or GPS and few water sources to make travel easier, but rather hostile natives, wolves, 130F heat, and -25F cold to make travel there even less inviting. It was so remote that its name in Turki means that "If you go in, you won't come out." As the British approached Central Asia from India, and the Russians from the North, and rumors of lost civilizations, treasure palaces and pleasure domes made their way to Europe and Japan; intrepid adventurers explored - and carted off by camel caravan - the remains of these civilizations. The explorers were larger than life: Sir Aurel Stein, an Anglo-Hungarian, Sven Hedin, a Swede, Albert von Le Coq, a German of Huguenot origin, Paul Pelliot a French philologist with a photographic memory, Count Otani, a Japanese Buddhist monk, close relative of the Emperor and probable spy, and Professor Langdon Warner of Harvard. Last but far from least, is a semi-literate tribesman whose endeavors as an artful forger in a Central Asian oasis made fools of Oxford's best philologists. All this makes for an incomparable read. How often does one read of a British diplomat urging that crossing a 18,000 ft peak and a 3 mile glacier three times during a blizzard to save the life of a frost-bit fellow traveler he met on the way be recognized by making the hero a Knight of the Hospitaliers of Saint John of Jerusalem? Hopkirk also questions and describes the ethics of removing these treasures from their Central Asian homes to store them in vaults in London, Berlin and elsewhere. Not without sympathy to both those who claim that the treasures should never have been removed, and to those who note that most of the treasures left behind were plundered or vandalized later on, he leaves the issue to his readers' judgment. I heartily recommend this book.

Published by Thriftbooks.com User , 18 years ago
Mr. Hopkirk in all of his works is accurate, profound and should be mandatory reading for all Foreign Service personnel. Having done Central Asia, the book was the "bible" in knowing the intimate details needed to not only do business in the post-Soviet era, but just in being able to discuss and move within the people where many thousands could not even bring voice to such concepts in the old days, which today are only "chatted" about in remote areas. Hopkirk rips at the fabric of humanity in what the west thinks is proper and what is reality in an eastern environment with its many passionate, intelligent, warm, and emotionally infectious people. I have read all of Peter's works several times and I continue to do so. You just have to be there to know that Hopkirk hits the nerve. It's just too much!! G. Jannotta

Burglary in the back of beyond

Published by Thriftbooks.com User , 20 years ago
What can you say about Peter Hopkirk that really sums up why he's the guru of the Great Game and derring-do in Central Asia. It's quite hard to put it down to anything in particular, but I find myself gripped with a longing for adventure every time I lift his tales and start to read. The Raj, the Russians, wild holy men and camel trains in Gobi sands - it's all there and I just can't get enough of it. Is it being British and longing to know how a nation of bunglers can ever come so close to ruling the universe? Or is it the sheer romantic lust for wide open spaces and seeing things no one has ever seen before - except of course the ones who live here? I don't know, but By Jings Foreign Devils on the Silk Road is about as romantic as you can get. It's about the race to steal the treasures of north-western China at the turn of the twentieth century. Sir Aurel Stein, a Brit. of Hungarian birth, and Sven Hedin, a Swede with a bit of thing for dictators, began a thirty year competition to find and save for posterity the ninth century Buddhist art work that had lain under the sands of the Taklamakan and Gobi deserts for the best part of a millennium. It would change the West's understanding of Central Asian history and their linguistics for ever. After Stein and Hedin there came the ever-brilliant French, the determined Germans and a very strange bunch of Japanese 'holy men' come spies. A Russian or two arrived a little late and the final curtain came down on an headstrong Yank who didn't quite get what he'd bargained for when the Chinese decided enough was enough. All set off from Kashgar and travelled by camel into no man's land in search of cities long forgotten and swallowed up in sand dunes. Not a satellite phone between them, they all managed to return with cart loads of precious art works and magnificent scrolls which they 'found' in desert oases and religious retreats guarded by monks who were up for a bribe or two. All met the McCartney's of Kashgar, those mad English nutters who ran a hilltop listening station in true Great Game style. (Yes the ones in 'Setting the East Ablaze' and the one's with the bathroom called 'Victory'). All steered by the stars and all had life threatening disasters involving frostbite and a bandit or two. By the end you'll realise why Stein and Pelliot aren't names worth mentioning next time you're passing through Chinese customs. The Chinese, funnily enough, aren't too pleased at being reminded they all stood by and watched while wave after wave of expeditions left their territory with priceless artefacts - some of which were destroyed in WWII bombing raids while others lie stacked in boxes under the cobbled streets of Bloomsbury in London. It's a gripping tale and one which reminds us that the world is very different now. You just can't ride a donkey into someone's house and rob them any more. How sad.

So where was Indiana Jones?

Published by Thriftbooks.com User , 22 years ago
A mesmerising book, Hopkirk writes with a flair and passion that is infectious. The stories told by Hopkirk in 'Foreign Devils on the Silk Road' read like they belong in an Indiana Jones movie: Russian, French, Chinese, British and even Swedish(!) adventurers - heroes and villans both - competing to find the treasures of legendary cities buried for centuries beneath the trecherous sands of the Taklamakan desert. Exotic locations (still largely unknown to the Western world), rumours of supernatural forces protecting the buried cities - even the Indiana Jones-esque link to early Christian sects (the Nestorians) - it's all there! But it's more than just a "boy's own" adventure story: Hopkirk provides fascinating insights into the history of the ancient Silk Road as well as its latter intersection with the Great Game. I've been trying to figure out how to get to the Taklamakan ever since reading the book, which is now several years ago. This is history at its most readable.

Fulfills the promise of its title. Recommended.

Published by Thriftbooks.com User , 23 years ago
Excellent coverage of the first outside researchers to visit Chinese Turkestan (Xinkiang) in hundreds of years. These were men who braved extreme hardships to explore one of the world's most desolate places, the Taklamakan Desert. Hopkirk avoids a blanket condemnation of those who removed to other countries the old Buddhist wall paintings/manuscripts/etc., noting that at least some of it would have been ruined had it stayed -- and had been ruined. Hopkirk also follows up on some of the interesting side issues: were the Japanese "archeologists" really spies, for instance. And he brings the reader up to date on what happened to the old treasures and where they are now, noting that much of what was once buried in the Taklamakan is now buried in storage at the British Museum. This is not a large book but I suspect a lot of research went into it. Concise, informative, and entertaining.
Trustpilot
Copyright © 2022 Thriftbooks.com Terms of Use | Privacy Policy | Do Not Sell My Personal Information | Accessibility Statement
ThriftBooks® and the ThriftBooks® logo are registered trademarks of Thrift Books Global, LLC