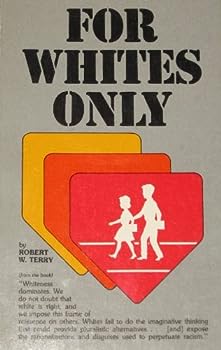 Exposes racism of liberals and conservatives. This description may be from another edition of this product.

Published by Thriftbooks.com User , 13 years ago
This book is one among over thirty on a bibliography provided to anti-racism educators in the network that I train and support. It made this educator's list because it supports the development of critical thought while it clearly conveys the existence of multiple contexts in which such thought resides. I heartily recommend it.

When is Washington's Birthday?

Published by Thriftbooks.com User , 23 years ago
- What Gordon Allport did for understanding individual racism (prejudice) and Louis Knowles & Kenneth Prewitt did for understanding institutional racism, Bob Terry did for understanding cultural white racism.- Although published in 1970, the message of developing a new white consciousness is still valid in the 1990s. New White Consciousness: Affirming self-determination, respect, and cultural pluralism for all. - Both white conservatives and white liberals misplace the problem when it comes to cultural white racism.-- Historical Myths: What does Thanksgiving mean to Native Americans? -- Contemporary Language: Whiteness is celebrated as good (white hat special); whereas Blackness is castigated as bad (blackmail and black market).-- White Standards: The standard of beauty--blond hair and blue eyes--doesn't apply to people of color.- Question: So when is Washington's birthday?- Answer: It depends on which Washington you're asking about--George or Booker T.
Trustpilot
Copyright © 2022 Thriftbooks.com Terms of Use | Privacy Policy | Do Not Sell My Personal Information | Accessibility Statement
ThriftBooks® and the ThriftBooks® logo are registered trademarks of Thrift Books Global, LLC