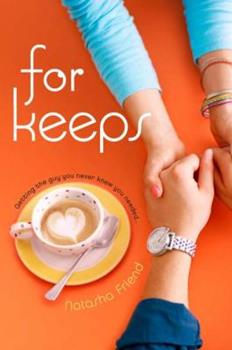 For sixteen years, Josie Gardner and her mom, Kate, have been a team. It's been the Gardner Girls against the world, and that's how Josie likes it. Until one day, they find out that Paul Tucci, Kate's high school boyfriend-the father Josie has never met-is back in town. Josie's mom suddenly turns back into the heartbroken teenager she was when Paul moved away. Meanwhile, Josie's on the verge of having her first real boyfriend. And when Josie learns...

Wonderful move to YA

Published by Thriftbooks.com User , 11 years ago
It's always been just Josie and her mom Kate, and that's the way Josie likes it. For the most part, Kate is the best mom and friend a girl could ever want. But the second anyone from Kath's high school years shows up, she loses control, still stinging from the embarrassment of being a pregnant teen. So when Josie and Kate run into the parents of Paul Tucci when shopping, Kate predictably freaks out, even more so more so usual because Paul Tucci was Kate's high school boyfriend, the guy who knocked her up, Josie's father. Now that Paul's back in the picture, Kate can't seem to navigate her own relationships while Josie struggles not to make the same mistakes her mom did as a teen. It turns out, there's a lot about Paul Tucci, her mom, and her own self that Josie didn't know. Friend graduates from her previous middle grade oriented novels successfully to young adult with her latest novel For Keeps. I've always liked Friend's writing style and thoughtful character driven stories, and the only difference between For Keeps and Friend's earlier novels, thankfully, is the age of the main character. Perhaps it's just the transition from middle grade to young adult, but Friend's already wonderful writing seemed to take on an extra sense of sophistication in this novel. I really enjoyed reading Josie's story. It touches on subjects like family, friendship, and other relationships in a fresh and insightful way. Best of all, though, was Friend's still at creating extremely realistic characters. Josie's thoughts and fears were easy to relate to, and because of this, the story was even better. I applaud Friend for this sweet and heartwarming addition to the young adult genre. I recommend For Keeps to fans of Friend's other novels, including Perfect and Bounce, as well as to those who enjoyed The Secret Life of Prince Charming by Deb Caletti and This Lullaby by Sarah Dessen. I look forward to reading whatever Friend produces next.

Published by Thriftbooks.com User , 11 years ago
I was really excited to discover Natasha Friend was releasing a new book. Many of my students have enjoyed her other books: LUSH, BOUNCE, and PERFECT. Now that I've read FOR KEEPS, I know they will love this one, too. What happens when you think that sometimes you are more mature and in control than your mother? That's how Josie Gardner sometimes feels. She and her mother have made it through a lot together. Josie knows she was the product of a high school romance. She knows her dad's name was Paul Tucci and that he left town with his family not even knowing he was going to be a father. It never really made a difference until one day in the grocery store. Josie's mother suddenly ducks for cover in the pet-food aisle. What is going on? Kate Gardner appears to be a nervous wreck as she whispers to her daughter that Paul Tucci's parents are in the store. When Josie takes a peek at the couple headed for the checkout, she suddenly realizes they are her grandparents. Now it's a matter of calming down her frantic mother and finding out what they are doing here. The mystery is solved by Josie's best friend, Liv. With a little amateur sleuthing, Liv finds out that the Tucci's have moved back to town. When Josie tells her mother, she's surprised by Kate's sudden lack of interest. Josie doesn't think there will be a problem and probably not even any contact between them. It all changes when her boss turns his mediocre ice cream parlor into a thriving little pastry/coffee shop. Josie's grandfather, Big Nick Tucci, becomes a regular customer. Again, thanks to her talkative best friend, Josie learns that Paul is the youngest of the Tucci's three boys, and he remains unmarried, working with at-risk youth somewhere in the Carolinas. Filled with mixed emotions about the possible return of the side of her family she's never known, Josie faces further emotional upheaval when the popular and attractive Matt Rigby makes it known that he is interested in dating her. It's almost more than one girl can handle. Natasha Friend's fresh, straightforward style makes FOR KEEPS excellent reading entertainment. Her use of humor, down-to-earth characters, and heartfelt relationships will have her fans cheering and any new-comers clamoring for her earlier books. I'm glad to see this new arrival and will be eagerly awaiting more to come. Reviewed by: Sally Kruger, aka "Readingjunky"

Published by Thriftbooks.com User , 11 years ago
Josie was deserted by her father before she was born. She fears the abandonment and heartbreak that her mother experienced. Her mother fuels Josie's fear with the lack of relationships in her life. Her best friend Liv tries to have her make connection with her family and the very cute, Matt Riggs. Then the grandparents on Josie's father's side of the family move back into the area. Josie quickly forges a friendship with her grandfather, which gives her insight into the family that she has never known. An unexpected tragedy brings the truth about Josie's family to light and provides a great opportunity to forge actual relationships with her family. Josie reminded me a lot of my sister. My older sister didn't know her father growing up and has a similar personality with Josie. So, I quickly became attracted to her and wanted a positive outcome for her. I loved that Josie was still a teen while dealing with family stuff, like she started dating Matt. I also loved Josie and her mom's relationship, because it reminded me a lot of Gilmore Girls. I rarely see positive relationships between parents and their children in Young Adult fiction. I love when good parents are actually present in YA, because they are usually absent or negative parents. I also liked that Kate had her own personality, like her fears about dating and her uncertainty. Josie's best friend Liv made the story more lively. She was a funny character that made me laugh with her personality and fashion choices. I also liked that she wasn't just some supportive character, but had her own issues in the book. I also enjoyed Josie's grandfather, Big Nick. He was very sweet and spirited. Josie's love interest Matt was also cute and lovable. The plot was quite predictable, but it didn't bother me. The characters had captured my attention so much that I didn't mind that it was predictable. The plot also had some originality that I enjoyed. I also enjoyed Friend's writing as I did in her other books. This book had me thinking about it for a long time after it. It also reminded me a lot of Looking For Alibrandi and Gilmore Girls, which I love both very much. I highly recommend this book to anyone that enjoyed Friend's previous books or is searching for a wonderfully written character driven book, For Keeps is perfect for you.

Published by Thriftbooks.com User , 11 years ago
Okay, so after reading this book, for some reason, I keep picturing the Gilmore Girl chacters in my head. Especially Paul Tucci--I keep seeing him as Christopher from the TV shower. I see a lot of similarities in the way that the mother-daughter bond is in both the tv show and the book. This was a pretty good book for me. Nothing spectacular, but I enjoyed it. I felt that the characters and the story line seemed very real. I think that having a mom dating again is an ordeal (not sure if this is the right word) that many teenagers go through if they live with a single mom. And I think that the romance between Riggs seems pretty real too. (I know some bloggers are having problems with Josie forgiving him for something too easily, but honestly, I probably would have done the same thing.) The only thing that I didn't like is that I felt that the ending was too soon. I want to know more about what happened with Paul Tucci and with the guy Josie's mom was dating. And I want to know more about Josie and Riggs' relationship. If you want a cute, "real" read, then I think you would enjoy this one.

Published by Thriftbooks.com User , 11 years ago
Josie Gardner lives with her single mother Kate, who gave birth to her when she was only sixteen. Josie and Kate are close, more like sisters than mother and daughter, and Josie is used to her mother avoiding people from her high school and acting like a teenager herself at times. But then one night, Kate spots the parents of Paul Tucci, Josie's father, and she unravels. Paul has never contacted Kate or Josie since he moved to Arizona with his family before Josie was born, but now with his parents back, both Kate and Josie know it's only a matter of time before Paul shows up as well. For Keeps is a sweet, eclectic, and meaningful read. Readers who also fans of the TV show Gilmore Girls will see a lot of similarities between the two. Josie is a smart and responsible character, making her an easy to relate to character and someone the reader can look up to. The cast of supporting characters are dynamic and fun (especially Josie's quirky best friend, Liv), and the perfect pacing and humor on every page balances out the rather serious subjects of teenage pregnancy and Josie and Kate's feelings toward Paul's absence for over sixteen years. In addition to her family issues, Josie also has to grapple with Liv's crazy (and sometimes reckless) actions, and her budding romance with her crush/semi-boyfriend Matt, which is light and cute, but it seems to take a back seat to all of the family drama once it starts to really unfold, and then pop up again at the end. Nonetheless, For Keeps is well-plotted and keep busy enough to keep readers entertained without ever seeming boring. Fans of Sarah Dessen, Deb Caletti, and Susane Colasanti will enjoy this book with about atoning for past mistakes and missed connection, and, most importantly, new beginnings. Cover Comments: I like this cover a lot. It's sweet and bright, and seems to capture the mood of the book perfectly. Very nice!
Copyright © 2020 Thriftbooks.com Terms of Use | Privacy Policy | Do Not Sell My Personal Information | Accessibility Statement
ThriftBooks® and the ThriftBooks® logo are registered trademarks of Thrift Books Global, LLC