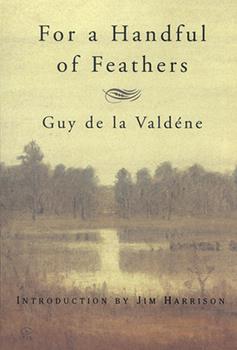 For a Handful of Feathers

A lifelong hunter and wild-game gourmet who has traveled the globe on expeditions with world-class sportsmen, Guy de la Vald ne purchased an 800-acre farm outside Tallahassee and set out to raise and hunt his favorite game bird, bobwhite quail. But de la Vald ne is also a naturalist at heart, and as he planted trees and divided fields, he found that running the farm compelled him to operate as both hunter and preservationist, predator and protector...

Published by Thriftbooks.com User , 20 years ago
Hemingway proved that few subjects are better topics then hunting and the outdoors.Guy De La Valdene does a wonderful job writing about the types of things that make life worthwhile and fullfilling: birds and dogs. Additionally, he makes the point that much of our wildlife and habitat would not exist if not for the devotion of true outdoorsmen and outdoorswomen.Brett

Published by Thriftbooks.com User , 22 years ago
I have not read much hunting literature, but was quite impressed with this book. I found that De La Valdene made a good case for hunting, and I found his conservation-minded views to be very enlightening. The book covers as many aspects of the sport as possible, including De La Valdene's love for dogs and even a certain love for other predators of quail. The writing is not the best that I have read, but his passion for the sport is such that it transcends any writing difficulties. A beautiful book.

Published by Thriftbooks.com User , 22 years ago
I belive that Guy de la Valdene book was written very well. In his book he wrote numerous facts on the Bob White Quial and the management of the species. He wrote on the quial,s habitat, feeding, and average of how many quail would reach maturity. I found that in his book he didn't have harsh feelings against the birds predators. Also that he felt that killing the predators wasn't the answer to the conservation of the Bob White Quail. Although he is a hunter, I belive that he is more of a conservationist. His book would help anyone with the understanding of the Bob White Quail.

Published by Thriftbooks.com User , 23 years ago
This is a remarkable book. Admittedly my vice is quail hunting, but this book is that and much, much more. It demonstrates an insight into the minds of people. Its language can be a bit rough but only in the way people speak. To anybody who has a love for the outdoors, nay, civilization, this is highly recommended. Its near literature.

Published by Thriftbooks.com User , 26 years ago
valdene's style is just right for the hunter and outdorsman in me. i enjoyed valdene's down-to-earth approach to hunting and his expressions of the feelings of a hunte
Trustpilot
Copyright © 2022 Thriftbooks.com Terms of Use | Privacy Policy | Do Not Sell My Personal Information | Accessibility Statement
ThriftBooks® and the ThriftBooks® logo are registered trademarks of Thrift Books Global, LLC