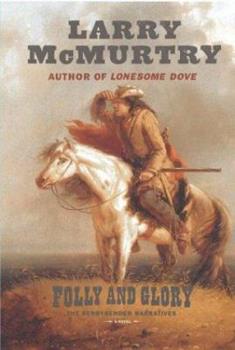 Folly and Glory: A Novel (The Berrybender Narratives, Book 4)

(Book #4 in the The Berrybender Narratives Series)

This description may be from another edition of this product. In this brilliant saga -- the final volume ofThe Berrybender Narrativesand an epic in its own right -- Larry McMurtry lives up to his reputation for delivering novels with "wit, grace, and more than a...

"Travel is never as neat as one imagines it will be."

Published by Thriftbooks.com User , 16 years ago
And that is how the story ends.This book is the finale of McMurtry's exciting Berrybender narratives tetralogy.I did reviews on the others;Sin Killer,Nov 30,2003;The Wandering Hill,Dec 21,2004; andSorrow's River,Dec 24,2004. McMurtry continued this great saga,and gave us a constant stream of exciting events and always captivating characters.As with all McMurtry novels there is the element of history embellished with fiction to keep the story fresh and exciting. I believe this saga will find its place along with what I believe to be the best ,most interesting and popular historical novel of America;namely,Gone With The Wind.Until now, there has been no equal to Mitchell's great novel;possibly McMurtry has done it. In both of these sagas there are a host of characters and readers will have their favorites .Some will pick the main characters while others will pick some of the lesser ones.Ashley or Pittipat in GWTW and Piet Van Wely and Bess are examples who really compete with Scarlet and Rhett in GWTW as does Tasmin and Jim Snow in this story. Again, I strongly recommend reading these books in order and one right after the other for the greatest effect. Some of the lines I liked best were: "There is no reasoning with grief,it wears away slowly like the face on a coin." "Life happens day to day." "You can't hurry life- just got to wait it out." "The Sin Killer was going to fall on the heathen,screaming out the Word.His sword and his gun would then accomplish what needed to be done." Can't recommend it high enough. I sure hope a Movie is in the works;it'll be a corker--can't wait!

Published by Thriftbooks.com User , 17 years ago
A fitting end to a great epic story. Larry McMurtry outdoes himself on the last segment of the Berrybender saga and as usual paints the West with his harsh but realistic brush. Even so, I would like to see what happenned to Tasmin and the rest of the clan but that would mean that the author would have to travel to England, a venue he is not as familiar with. However, I will not sell McMurtry short and if he is of mind, I am sure a fifth in the series could be on the shelves next year. I, for one, am hoping.

Published by Thriftbooks.com User , 17 years ago
Folly and Glory is the last of the four books in the excellent tale. You must start with the first book, Sin Killer. Each story leaves you craving more. In this book, what's left of the entorouge, leaves Santa Fe where they have been under house arrest, and make their way across the plains to St Louis. Birth, death, indians, desert, rages, affairs, adultry, murder,soldiers fancy balls, Tasamin has twins, Jim Snow lets loose the fury of the word on enemeys. This series is a must read, you cannot put it down.

Published by Thriftbooks.com User , 17 years ago
When I began the Berrybender Narratives, I was expecting a happy, humorous lark though the American West of the 1830's. And, throughout Sin Killer, that is exactly what I got. However, as the series progressed, each book became a little darker, a little more serious, until finally, I read Folly and Glory, put it down, and realized that somewhere along the line this series became a true Larry McMurtry depresser. Not that it's a bad thing! Any McMurtry fan knows that there is going to be at least SOME death and violence in the novels. But wow! Was I depressed after I finished Folly and Glory! But, strangely, I was depressed in a good way, because I truly cared about these characters and their fates. Larry McMurtry has this great talent in which he can just write one paragraph, or one page, and in this paragraph or page, everything is pulled together so well that I end up reading it again and again. (See Captain Clark's reaction to Pomp's death--or even Ben Sippy's reaction to the aftermath of the battle of Skunkwater Flats in Anything for Billy, if you want to know what I mean.) This book is a wonderful ending to a wonderful series. I am only sad that I cannot find out what happens in the rest of Tasmin's life, or Jim's, for that matter, even though I didn't like him much in this book. This series was amazing! Read it!

THE CULMINATION OF A VERY WILD RIDE

Published by Thriftbooks.com User , 17 years ago
FOLLY AND GLORY by Larry McMurtry is a fitting benediction to McMurtry's Berrybender tetralogy. Despite reviews that paint this book as being about as violent as anything that McMurtry has written, I determined to complete the tale of a family of dysfunctional British gentry who come to America in the early Nineteenth Century to "see the sights" as it were. What I discovered was yet another fine work by McMurtry that was a joy to read. Regarding McMurtry's treatment of violence, I suspect his statement to the modern reader is that violence in the past was as everyday as eating, sleeping or breathing. To our mollycoddled world, where tragedy manifests itself most acutely in the outcome of the latest reality TV program or contest, McMurtry's nonchalant depictions of frontier violence may seem insensitive. But in a world where one could be moving along the trail swimmingly one minute and gasping for life the next with an Apache arrow in his [...] it was likely very common to develop a rather McMurtryan viewpoint of life, of death and of the violence inherent to both. As with the other three volumes of this series, FOLLY AND GLORY delivers a very engrossing tale with the usual cameo appearances of some of the geographical area's and period's most notable figures. From Old Santa Fe to the Alamo, FOLLY AND GLORY is another McMurtry triumph. THE HORSEMAN
Copyright © 2020 Thriftbooks.com Terms of Use | Privacy Policy | Do Not Sell My Personal Information | Accessibility Statement
ThriftBooks® and the ThriftBooks® logo are registered trademarks of Thrift Books Global, LLC