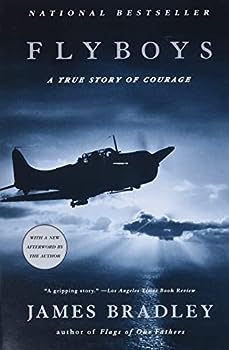 Flyboys: A True Story of Courage

Over the remote Pacific island of Chichi Jima, nine American flyers-Navy and Marine pilots sent to bomb Japanese communications towers there-were shot down. Flyboys, a story of war and horror but also... This description may be from another edition of this product.

One of the best books I've ever read.

Published by Wes H , 1 month ago
I've never felt so moved while reading a book. It was just the right balance of story and information. It's safe to say I'll be scooping up all of the James Bradley books I can!

Published by Paperboy , 10 months ago
This is an excellent book. Fantastic. A keeper for sure.

Published by Kathy , 1 year ago
What an amazing writer. A story of ww2 Pacific theater. But so much more. I learned so much about the history of the area and what led up to the war. Highly recommend.

Published by Thriftbooks.com User , 14 years ago
My dad loves true military stories, and I got this for him for Christmas. The previous Christmas I had gotten him "Flags of our fathers." He loved it. My dad is a good reader, but he never reads for hours on end putting other stuff aside just to do so. But, this book had him reading for the better part of his Christmas break. He also said it was somewhat sad, but not overly.

One of the best WWII books I've read

Published by Thriftbooks.com User , 16 years ago
I picked this book up on a whim and was unable to put it down. James Bradley's book is graphic at times, but enlightening. I found myself extremely curious as to what happened to members of my own family who fought in the Pacific.

Great Insight into the War in the Pacific

Published by Thriftbooks.com User , 16 years ago
I picked up Flyboys thinking it would be a direct narrative of the tales of a small group of American airmen captured by Japanese troops. But while Mr. Bradley does cover the development of the American airpower and these young men individually, he also delves into the psyche and reasoning of the Japanese war machine and how the atrocities the Flyboys would endure would come to be. From the ancient Samurai tradition to the misguided military leaders under Emperor Hirohito, Mr. Bradley chronicles the Japanese effort to adapt to a rapidly changing world; a world in which European nations were quickly subjugating all of Japan's neighbors. Flyboys is a mesmerizing tale and although occasionally changing direction abruptly, was a joy to read. But perhaps the most outstanding aspect of James Bradley's Flyboys is his stedfast objectiveness and ability to remind us of the human side of the enemy. Even while condemning the horrendous acts that the Japanese perpetrated in their occupation of China and to the captured Americans, he reminds us that Americans used many such similar tactics in military engagements. This book served a perfect introduction for the unseasoned War in the Pacific reader like myself, and I look forward to reading Flags of Our Fathers and his further writings.

Published by Thriftbooks.com User , 17 years ago
My father was a Fighter Pilot in WWII stationed on Iwo Jima, not far from Chi Chi Jima. He has spoken about his experience in the war only twice, the second time after I read this book and asked him about Chi Chi Jima, an island I had never heard of before reading this book. My father told me the pilots had an silent agreement that they were better off ditching their plane if they were going down rather than risk being taken prisoner because the treatment of American POWs was so barbaric. After reading this book, I understand that decision. Although I found the descriptions of the American POWs' last days on Chi Chi Jima very difficult bear, to the point where I had to put the book down for a few days because it was so upsetting, Fly Boys is a must-read. The American soldiers whose experiences are described in the story are true heroes. I believe this book should be incorporated into High School history classes, with the last surviving veterans of WWII invited into the classroom to speak about the war so their sacrifices won't be forgotten.

A riveting account of part of WWII in the Pacific

Published by Thriftbooks.com User , 18 years ago
I appreciated the historical background that Bradley included. My mother and her family were living on Oahu when Pearl Harbor was attacked (my grandfather saw the planes fly overhead with the "rising sun" on them that fateful Sunday morning) and my father fought as a gunner's mate in the Navy (his ship was sunk by a Japanese torpedo in the South China Sea--luckily, he survived), so I grew up learning more about the Pacific War more than any other part of American history. But I never really knew much about Admiral Perry's visit to Japan until I read this book. Rather than feel defensive about America's past injustices towards people of color, I believe it is important to learn from our mistakes or we'll no doubt repeat them in another war or conflict. While I support my government, I was always taught never to completely trust it--with good reason. Those Americans who get angry with their fellow countrymen/women who question their government are a danger to our country's survival as a free nation. A true patriot is well-informed, looks at all the facts, and is not afraid to face the truth.The historical background Bradley provided went a long way towards explaining the Japananese's belief system and attitudes towards the allied forces. And while that was helpful, it didn't change my feelings of horror and grief at reading what the Japanese did to the airmen they captured at Chichi Jima. I'd known about a lot of the atrocities that the Japananese committed during the war--medical experiments similar to what the Nazis performed, the brutality towards POW's, and their inhuman butchering of the Chinese--but I'd no idea they'd gone so far in their treatment of the captured airmen's dead bodies. Also, until this book, no one ever questioned why Hirohito was not tried for any war crimes. My mother thought the sun rose and set on General MacArthur's shoulders--until the battle at Midway, people on the Hawaiian islands were very nervous. How could he let Hirohito off the hook?This story needed to be told and Bradley has told it very well. Everyone needs to read this book.
Trustpilot
Copyright © 2022 Thriftbooks.com Terms of Use | Privacy Policy | Do Not Sell or Share My Personal Information | Accessibility Statement
ThriftBooks® and the ThriftBooks® logo are registered trademarks of Thrift Books Global, LLC