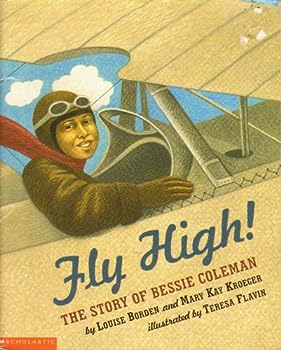 When Bessie Coleman was a child, she wanted to be in school -- not in the cotton fields of Texas, helping her family earn money. She wanted to be somebody significant in the world. So Bessie did... This description may be from another edition of this product.

The life of Bessie Coleman.

Published by Thriftbooks.com User , 15 years ago
fly high! is a story of a woman that name is Bessie Coleman who meets a guy that tells her to go to France to learn how to fly.She traveled all over the world , until one day she crashed in California.She was in the hospital for three long months,and was not able to fly for a year.She didn`t give up on flying again.one day she was ready to fly again.A texas mechanic,William Wills,joined her.Bessie didn`t put on her seatbelt,and the plane went out of control.Bessie fell from the plane.

Published by Thriftbooks.com User , 21 years ago
Imagine walking four miles to school and four miles home from school. That's what Bessie Coleman did a hundred years ago. She wanted to be somebody-like Harriet Tubman and Bookier T. Washington. She knew that with schooling she could be. She worked hard, picking cotton, walking miles to collect laundry, and learning her numbers. When she was twenty-three, she moved to Chicago. There she became a manicurist. She read the newspaper, and listened when customers told tales about French lady pilots in World War I. She wanted to be a lady pilot. She boldly went to Publisher Robert Abbot who told her to earn some money and learn French. He would help her find a flying school. In 1920, she went to France,learned to fly, and became the first African American to fly. When she became a stunt pilot she spread her message, "You can be somebody. You can fly high, just like me." This colorful, beautiful, simply written book shows how Bessie Coleman was an inspiration. Her determination and hard work made her dreams come true! Read and find out the sad ending to this courageous woman's story!
Trustpilot
Copyright © 2022 Thriftbooks.com Terms of Use | Privacy Policy | Do Not Sell or Share My Personal Information | Accessibility Statement
ThriftBooks® and the ThriftBooks® logo are registered trademarks of Thrift Books Global, LLC