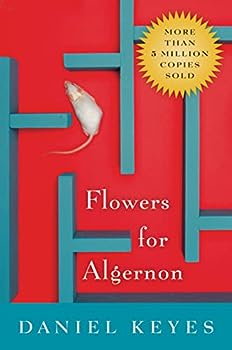 Winner of both the Hugo and Nebula Awards, the powerful, classic story about a man who receives an operation that turns him into a genius...and introduces him to heartache. Charlie Gordon is about to... This description may be from another edition of this product.

Ahead of its time

Published by Marty Miglionico , 1 month ago
It is very insightful to the human condition.

favorite book i've ever been assigned

Published by dominique , 1 month ago
this book holds and will forever hold a very special place in my heart. i am so incredibly attached to charlie and even algernon and this book had such a strong impact on me that no matter what page i open to, i start crying when i think about the ending. seriously worth a read; it's been three years since i was assigned this book as a project and i still love it just as much as i did the first time i read it.

Amazing book about Love and Loss

Published by Savannah B , 8 months ago
It had me absolutely hooked when I first opened the book. First day for reading it I was half way through it. I loved how it was written through the eyes of Charlie. Absolutely loved reading charlies story it was both beautiful and heartbreaking.

Published by Roni , 1 year ago
A good book to understand the internal emotions of people who think differently. We’re all meant to be exactly who we are

I hated this book.

Published by Nicole M. , 3 years ago
I hated it because it was just too sad. But I'm giving it 5 stars because I think other people should read it for some perspective.

Sucked in from the Moment I Opened it!

Published by Emmaleinn , 3 years ago
I was not much of a reader as a kid and middle-schooler. The teacher brought this book in and I had already decided I was not going to read it. She could sense many of us felt this way and decided we were going to read it in class. After going through the first 2 chapters I couldn't wait to come to class to pick up the book and begin reading. I was so sucked into the story and loved how it spoke to me and my classmates. It was amazing and we all cried at the beautiful ending this story has.

Published by Nick , 4 years ago
I love how it's in diary form. If you have any interest in how someone who is handicapped may feel then becomes smart then this is the perfect book for you.

Published by Thriftbooks.com User , 4 years ago
My new #1 book. I couldn’t put it down and read it in just a few hours. I felt so many emotions for Charlie. I was happy for him, sad, I cheered him on, bawled my eyes out. Without a doubt the one of the saddest books I’ve picked up, but nonetheless I’ve still recommended it to multiple people. I can see myself reading again in the future. 10/10
Published by Thriftbooks.com User , 6 years ago
Breathtaking. I could not put it down from the moment I picked it up. I felt connected to Charlie, definetly have a box of Kleenex near you.

Published by Thriftbooks.com User , 15 years ago
I remembered seeing this movie as a kid with Cliff Robertson who plays a retarded man named Charly who works in a bakery and is shunned by his mom after his sister is born and his sister. He has an operation and becomes smart for a short period of time. After reading this book, I felt sorry for him because when he was retarded he was treated shabbily and when he was really smart people wouldn't leave him alone. I liked both the boook and the movie a lot. A good story telling of Charlys progress reports, a mouse named Algernon and his story on how his life changed. 4.5 stars

Published by Thriftbooks.com User , 15 years ago
I was so surprised by this book. Flowers For Algernon was one of the best books I've read this year and I really wasn't expecting it. It is the story of Charlie Gordon, a man in his thirties with mental retardation. Charlie is the subject of a psychological research project at a university that is examining the effects of a new surgical procedure on mental retardation. Charlie's estranged sister gives the university permission to perform the procedure on Charlie. The procedure proves to be at least a temporary success and Charlie goes from having mental retardation to having an IQ of 185 in a manner of weeks. The experiment is initially tried on a white mouse named Algernon. Algernon is tested through a complex maze where he is rewarded by food after reaching the end. Charlie races Algernon with a maze of his own and receives a shock if he goes the wrong way. At the beginning of the book, Algernon beats Charlie to the finish line every time. But Charlie soon soars past Algernon and through the process grows close to the mouse. The book is written in the form of journal entries kept by Charlie for the experiment. At the beginning of the book, words are misspelled, ideas are vague, and relationships are simple. As the book progresses, so does Charlie's thought process and so do his relationships. Charlie learns what true love is as he falls in love with his teacher, Alice. He learns what physical love is as he comes into contact with his artistic and eccentric neighbor, Fay. And he learns the pains of relational love as he relives memories of his family and friends. What was most touching to me about this book were these flashbacks and moments of recognition. When Charlie was still mentally retarded, he didn't realize when people were laughing at him or making fun of him. He didn't realize that when his mother was crying it was because she was ashamed to have him as a son. But now that he has had this operation he is able to look back on these situations and realize what was going on. You can imagine the pain of this. Charlie is initially excited about "becoming smart". He's been teased throughout his life for "being a moron" and has been the subject of people's amusement. What Charlie soon finds is that acceptance is a hard thing to come by. Charlie goes straight from mentally retarded to genius. As a genius, he is seen as arrogant and absurd and is once again estranged by his peers.

I like this book oh so much because its smart.....

Published by Thriftbooks.com User , 20 years ago
I saw this book at the store and picked it up so I mite be smart in reeding it. It looked nice. I reed it when I was littel but didnt remember. So I picked it agin. The storie unfoles like a flower. Witch mite be how it got the titel. I'm still not sure on that. I know that Charlie Gordon isn't to smart in the begining but later he starts to get smarter. I liked that part. It was after some sort of operashun to his brane. And then Charlie's knowledge base begins to expand and things start to become clearer. But with this improved clarity comes a realization that previously held friends may not have been so friendly. And growing up as a moron wasn't necessarily such a bad thing. Does he have friends now that he's getting smarter?Charlie begins his ascent into genius level as his IQ passes 150. But the accumulated knowledge that he soon possesses can't prepare him for the retarded emotional state that he still finds himself in. The barriers he must break down are monumental and seemingly insurmountable. Can he do it? Does he want to do it now that he knows more about the world around him? Is the operation a success? Or a failure? Will Charlie remain at genius level or slide back into idiocy? Reed the book to find out more. Its a good book to. I like it a lot. I think Ill reed it agin sumtime. Now I just have to remember were I put it...

Published by Thriftbooks.com User , 22 years ago
I read this book for school when I was in 7th grade, and just finished re-reading it ten years and a degree in biology later. I loved it when I was a teen, and (after forcing myself to ignore my instinctive scientific skepticism) still love it today.It's a very thought-provoking story, all the more so when you consider that it was written about 40 years ago when society was a bit less tolerant of the mentally retarded than it is now. Charlie is a man in his 30s with an IQ of 68 when the book starts; through a controversial experimental operation, his IQ gets higher and higher until it soars at one point to 185. The story is told through the journal entries that he is told to keep for the researchers in charge of the study. Through Charlie's words, you can see how sharply his intellect grows and how difficult it is for him because as smart as he becomes, his *emotional* intelligence is still that of a child. Charlie's emergence from ignorance is painful for him; imagine learning all of life's hard truth's in a matter of weeks rather than the normal development from innocent child to worldly adult. And the ending of the book is heartwrenching. Everyone should read "Flowers for Algernon" at some point in their life. It's a classic.

Published by Thriftbooks.com User , 22 years ago
Flowers For Algernon is a very powerful book about a retarded man named Charly, who has an experimental operation done on him to make him a genius. I enjoyed this book for many reasons, one was the craft. The book is written in the form of Charly's journal, and as Charly gets smarter his spelling, grammar, vocabulary, etc. become more advanced. This allows the reader to see how he gets smarter through other means than what the book tells one. I also liked the characters, Charly in particular. I found it very interesting how Charly described being able to remember complicated things when before the operation he struggled to learn simple things. I also thought that all of the characters were very interesting and essential to the story. Flowers For Algernon is also one of the most original books I have ever read. Its craft, characters, and plot were all very original and unlike any other book I've ever read. Overall a must read; I strongly advise you read Flowers For Algernon.
Trustpilot
Copyright © 2022 Thriftbooks.com Terms of Use | Privacy Policy | Do Not Sell or Share My Personal Information | Accessibility Statement
ThriftBooks® and the ThriftBooks® logo are registered trademarks of Thrift Books Global, LLC