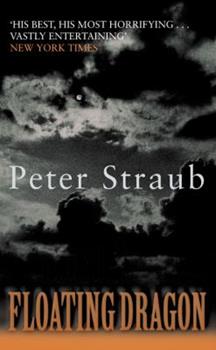 'Floating Dragon racks you with suspense Straub is a master at having whole communities rocked by the forces of wickedness.' Observer The terrors afflicting the sleepy town of Hampstead, Connecticut, were beyond imagination. Sparrows dropping dead from the trees like rotten fruit, disfiguring diseases spreading like wildfire, inexplicable murders and child drownings shattering the lives of the citizens - never can such a list of horrors have afflicted...

Published by Chase Simonton , 2 years ago
I bought this book because I heard it inspired Stephen King’s IT. This book was far better than IT! Loved it

Published by Thriftbooks.com User , 16 years ago
Peter Straub is a literate, intelligent man, who has raised the standards of the horror genre by his involvement with it. His prose reads more like that of Henry James than the pulp fiction hacks too often associated with horror stories. With Straub, sentences never end in prepositions, tenses are never mixed, and (sometimes unfortunately) one word is never used where ten might work as well. One other thing I noticed years ago is that Straub also portrays female characters more realistically than any other male writer I can think of off the top of my head. I really like Floating Dragon and have read it cover to cover at least three times over the last decade, and also will pick it up a couple times a year and open it at random just to let its vibe affect me, as it is guaranteed to do to anyone. The story here of a wealthy Connecticut suburb called Hampstead, which lies off Long Island Sound, and the series of serial murders with which it is beset with a frequency of about one in every two generations, is augmented by the release of a top secret chemical a local firm is developing on behalf of the Department of Defense. The chemical agent, which escapes to pass directly over the little town of Hampstead, causes severe hallucinations in anyone exposed to it, death in some cases, and in a small percentage of those deaths, the flesh of the afflicted seems to melt from the bone and become a fluffy, slimy ooze. Pretty gory! In Floating Dragon, the scene is set in the summer of 1980 for a cast of literally a couple thousand characters to survive the presence of both the chemical and the return of a supernatural killer who possesses his chosen agent and then proceeds to become a ripper-killer who leaves his horrendously mutilated victims behind, one after another. A small group, more aware than their fellow townspeople of the dual threats they are all facing, join to find out more about the evils besieging their community. Their research locates records of similar killings from the early 19th century through the 1890's, the 1920's, and the 1950's. They work as one to foil the plan to destroy Hampstead, Connecticut, and around them Straub tells an extended tale of insanity, murder, tragedy and darkness on a scale the likes of which few writers have ever attempted. This is a dreamy, uneasy, yet pleasing novel that exceeds its author's hopes and successfully brings together a plot of staggering dimensions.

One of Peter Straub's best books!!

Published by Thriftbooks.com User , 19 years ago
I have read this book three times since it was released in the early '80's. I think this is Peter Straub's best all-out horror novel. There are several chapters that still raise chills when I read them. I love the narrative and the pure descriptive power that he is able to build into each chapter. Peter Straub has never disappointed me in any of his books, and this one certainly ranks as one of the best !!

One of Straub's best

Published by Thriftbooks.com User , 19 years ago
By far, my favorite work by Mr. Straub. The bizarre events of the story and interesting characters fill the reader with deep concern for the outcome of this tale. Although a frequent complaint of Straub's works is a lack of cohesiveness and the side tales that some see as "false leads", these features only add to the eeriness and gives a dimension to the book that keeps it from being what so many other, less intriguing novels in this genre are- cut and dry. This one is definately not "cookie cutter". I found myself thinking about this book long after I had finished it, and found myself reading it again several months later. Straub did a fine job of truly creeping me out, which is what I look for in this genre.

Published by Thriftbooks.com User , 20 years ago
After reading the Talisman and Ghost Story, i was pretty sure that Peter Straub was a good writer, but now i am quite certain. I don't remember the last time i read a book as completely engrossing as this. The way Straub flows things together is just brilliant, especially in the prologue, and combining the DRG cloud with the Dragon makes it seem like you are getting two books in one, tossed together in a wonderful mix of insanity.While the cycle that things occur in is similiar to the one in Ghost Story, i feel that the difference between the two, explaining why it happens once every generation, makes more than enough sense to show that Straub is not simply rehashing a plot device from a previous story. I've read most of the other reader reviews of this book, and while I don't agree with some of them, it just goes to show that every person takes a book a different way, comparable to how someone feels about a song they are hearing for the first time. Some may love Floating Dragon, others may hate it, but if you like anything else Straub wrote, i highly recommend you read this title.

The siege of Heaven.

Published by Thriftbooks.com User , 21 years ago
Hampstead, Connecticut, is almost like a sister community to [the also fictional but] heavenly Stepford: gracious homes, genteel people, all the happiness money can buy.Then, on the afternoon of saturday, May 17, 1980, a local housewife, Susan "Stony" Baxter Friedgood gets horribly murdered meanwhile her emotional cripple of a husband witness an accident at a Secret Chemical plant and -- literally, but methodically- all hell breaks loose, or rather comes to settle, on the perfectly manicured lawns and beautiful, restored colonial houses on tree-lined streets.This is one of Straub's most ambitious horror novels... perhaps even more so than Ghost Story, although the villainess there is quite simply one of the most memorable characters ever created. But nevertheless, it breaks all the boundaries of where his work had gone before, or would go later.The main characters are people who live and breathe and slowly move into your heart and touch you in ways that surprise you: Take Graham Williams, writer and demon-chaser, who has battled his very own private horrors for ages; adorable Patsy Tayler McCloud, sensible and sweet, but also catalyst to ever so much power just waiting to be used. Tabby Smithfield, a boy who would go anywhere just to be loved, at least a little; and Richard Allbee, a man who is always trying consciously and un- to scape himself and his child-actor past and who has returned to his hometown after 12 years in London, along with his beautiful and very pregnant wife, the kindly and very human Laura, to face his destiny and future.Follow these characters and a few others that you won't be able to forget either (like Ulick Byrne, Sarah Spry, Wren Van Horne, Clark, Monty and Jean Smithfield, Les McCloud and the aforementioned, pivotal, and deeply moving Laura Allbee -- who evokes all the strenght and vulnerability of another memorable pregnant heroine, Rosemary Woodhouse, whom all of you surely know from a certain famous modern gothic) through a landscape that slowly but imminently shifts from a suburban paradise into a breeding ground for nightmares.Ira Levin meets Henry James and Lovecraft? Maybe... this novel deservedly won the British Fantasy Award and has unjustly been branded as "talky" and "overlong"... actually, its lyrical nature and accurate detail of the setup is one of its most disturbing aspects, once the gory, horrifying and breathtakingly awesome denouements come around (my personal favorite? Richard Allbee's epiphany/dream sequence on which he meets Philippa, his daughter, before coming home to Laura) to haunt you.Give this book a chance and you will never forget it. Wondering, why was it never made into a film? It woyuld be so much better -- if well-adapted- than much of the unbelievably horrid stuff we get these days.Definitely one of my all-time favorites.
Copyright © 2020 Thriftbooks.com Terms of Use | Privacy Policy | Do Not Sell My Personal Information | Accessibility Statement
ThriftBooks® and the ThriftBooks® logo are registered trademarks of Thrift Books Global, LLC