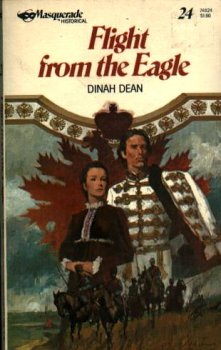 (Book #1 in the Eagles Series)

This description may be from another edition of this product. Always stubborn and independent, Angela Grayson thought she could take care of herself. Lucas Delancey knew better. Someone was stalking his best friend's little sister, and Lucas wasn't going to...

Published by Thriftbooks.com User , 17 years ago
FLIGHT FROM THE EAGLE is part of Dinah Dean's Russian series. The hero, Major Lev Orlov, is fleeing from Napoleon's Grande Armée, heading a group of wounded soldiers. He himself is injured and suffers pain from an arm wound. On the way to Kaluga, where they hope to find peace and shelter, he encounters a lonely woman, Countess Barova, whose aunt has just died and who is left to her own resources. Orlov is a true gentleman and takes the countess under his wing. Together with his group of battle-scarred infantrymen, they depart for safety. On the road, Orlov and the countess become friends. She takes care of him when he is wounded and feverish, he protects her from lewd advances. As can be expected, they gradually fall in love. This is a nice little story that does meander and is mainly about the feelings of the main characters. There isn't really too much action. Lev is a wonderful hero and Irina is a sweet, plucky girl who is a bit unsure of herself after having been a companion to a demanding aunt. Watching them fall in love is delightful. Dean uses a dry, wry humor to add sparkle to her books and I can say if you liked this one, you'll probably like all her books. B+
Copyright © 2020 Thriftbooks.com Terms of Use | Privacy Policy | Do Not Sell My Personal Information | Accessibility Statement
ThriftBooks® and the ThriftBooks® logo are registered trademarks of Thrift Books Global, LLC