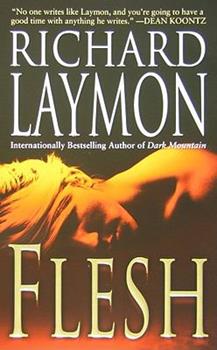 No one in town has ever seen anything like it; a slimy, mobile tube of glistening yellow flesh with dull, staring eyes and an obscene, probing mouth. But the real horror is not what it looks like, or what it does when it invades your flesh - but what it makes you do to others.

Published by Thriftbooks.com User , 12 years ago
Something quite horrible arrives in this small town that has never been seen before that invades your flesh and makes you do unspeakable acts to others.

Published by Thriftbooks.com User , 18 years ago
This was the first Laymon novel I ever read and it maintains a spot in my heart. This is another attempt by Laymon to show how dark some people can become.The story opens with a maniac looking for a new victim. But the maniac is quickly toasted, but not before a disgusting worm leaves his body to infest another. People infested with the work turn violent and shed all pretense of being civilized.Typical Laymon suspense and horror spiced with the reality of just how does one go about stopping this worm.Laymon again shows us that he can craft characters who act as people should. In this book, it takes time for people to see the signs of the worm and deduce that something else might be behind the violence.A terrifying read that will really make your flesh crawl.

If you have never read Laymon, Flesh should be the first

Published by Thriftbooks.com User , 19 years ago
This book has a different style than any other Laymon, most of his books could not be converted to film due to censorship, but this book in my opinion can be made into a great movie, yet it still contains Dicks usual magic and blood splattering fun.Its a simple concept really, a worm that crawls into people and turns them into homicidal maniacs, thrown in is the usual love story spiced with a little sex, but the finished product is more than the normal, its written with perfection, its unputdownable and you will be going back for more, I treasure my copy and will do so for as long as I live, if you love horror or even just love reading you must at least read this book, you will never forget it.

Published by Thriftbooks.com User , 21 years ago
Sometimes you read for deep enlightenment, for knowledge or just to broaden your horizons. Sometimes you read just to have fun. FLESH definitely qualifies under the last category! Any of Laymon's books is an automatic ticket on a non-stop thrill ride. You might get those butterflies in your stomach before you start, you might even feel a bit queasy before the ride's over, but you're going to rush to the end of the line to ride it again and again. FLESH introduces a whole crowd of characters beginning with Eddie who is cruising back roads in his van for his next victim. Eddie ends up a bit crispy, but what happens after that is absolutely fascinating. Seems that dear Eddie was not acting alone; he was the host for something that compels humans to turn cannibal. The whole novel follows the leap of this "something" from person to person, hideous murders, creepy abandoned buildings with danger at every corner and one cop's relentless pursuit of the weird killer. Along the way, Alison becomes an unsuspecting target, and the reader is treated to scene after scene of nightmarish proportions. ("Ron lifted his head. A bleeding patch of his wife's flesh came with it...He calmly chewed. Then he reached back for the shotgun.") FLESH is typical Laymon. It's gritty, it's fast-paced, it's filled with gore and sex. However, Laymon has a great feel for suspense and mystery; there are segments here that had me checking over my shoulder every few seconds. I got a bit fed up with reading constantly about Alison's dilemma over whether or not to have sex with her boyfriend, but all in all, this was one heck of a good read! Don't pick this one up if you are the least bit squeamish...there's a lot of graphic gore and quite a bit of sex (which isn't as graphic as the gore). But if you like good, solid horror, check this one out along with any of Laymon's other titles.

Published by Thriftbooks.com User , 23 years ago
Richard Laymon's 'flesh' is thick and full of blood.........a tale of a flesh eating, blood sucking worm may seem a little unusual to you long time Laymon devotees, however this book follows one theme common to Laymon....addictive reading, I was able to read this book in one sitting...stuck to every page by the drying blood oozing from the spine.....this is Richard Laymon, at his very best.
Copyright © 2020 Thriftbooks.com Terms of Use | Privacy Policy | Do Not Sell My Personal Information | Accessibility Statement
ThriftBooks® and the ThriftBooks® logo are registered trademarks of Thrift Books Global, LLC