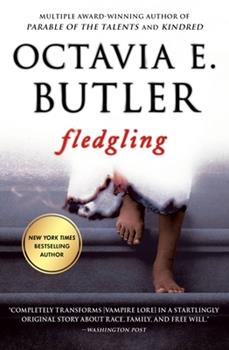 "A master storyteller, Butler casts an unflinching eye on racism, sexism, poverty, and ignorance and lets the reader see the terror and beauty of human nature." - The Washington Post This is the story of an apparently young, amnesiac girl whose alarmingly unhuman needs and abilities lead her to a startling conclusion: She is in fact a genetically modified, 53-year-old vampire. Forced to discover what she can about her stolen former life, she must...

Deserves To Be Remembered As Among Butler's Finest Works of Fiction

Published by Thriftbooks.com User , 15 years ago
It is indeed bittersweet that "Fledgling: A Novel" brings to a close the brilliant career of science fiction writer Octavia Butler, whose engrossing fiction made her a noted writer not only of science fiction, but truly, among our most compelling fictional commentators of American race relations and elegant literary stylists (She was one of my favorite science fiction writers, and her untimely death last year is truly a great loss to literary science fiction, contemporary Afro-American literature, and indeed, all of contemporary English language literature.). Her final novel can be regarded as a triumphant coda to that career, truly encapsulating all of her sociological and anthropological concerns, and acting as a mesmerizing, profound fictional commentary on the state of race relations here in the United States. She has done the impossible, reviving the time-worn vampire novel genre, and instilling in it, a breath of fresh air, by writing a most memorable tale on the nature of individuality, free will and prejudice. In Shori Matthews, she has sprung forth a most compelling literary creation, telling her tale in a fascinating combination of fast-paced, truly "blood-and-guts" thriller and legal drama that ranks alongside the best from the likes of John Grisham, for example, in her compelling description of Ina society and culture. This splendid novel is destined to become a literary classic, favored not only by Octavia Butler's fans, but more importantly, those interested in reading the finest fantasy and science fiction literature.

Published by Thriftbooks.com User , 15 years ago
Shori Matthews is a 53-year-old vampire encased in what is seemingly the body of a preteen child. She has awakened from a healing sleep...broken, burned, and with no memory of the harm that has befallen her. She also has a voracious hunger...caused by the fuel that her body has used in its efforts to heal itself. Wandering through what appears to be a village that has been burned to the ground, Shori is picked up by a stranger who simply sees a child wandering the roads alone. It doesn't take long for Shori to discover her desire for blood....and the stranger, Wright, becomes her symbiont. Returning to the village hoping to find some clue about who she is, Shori eventually encounters a man who claims to be her father. He informs her that she is indeed a vampire, part of a proud race of people called Ina. The Ina are all vampires...and are tall, blonde, and very pale; very unlike Shori herself. Shori is informed by her father that she is a feat of genetic engineering; a successful experiment performed by her family in which a male Ina sired a child with an African-American woman...hoping that the darker pigmentation will make their offspring less susceptible to the harmful rays of the sun. In addition, Shori is horrified to find out that the burned out village was actually the home of her mother, sisters, and extended female family (male and female Inas do not live together). Who would want to kill an entire village of women and children? Shori and Wright make plans to meet her father later and move to his village with him...he is thankful that Shori has survived the massacre. When Shori's father does not show up to meet them at the designated time, Shori and Wright set off to his village on their own...only to find that his village has met the same fate as that of her mother's, with only two lone survivors. The question is...who is killing her family, and why? It soon becomes clear that the killers are indeed Ina themselves, and that the motive for doing so lies in the color of Shori's skin...... An amazing web of the supernatural and science fiction--coupled with a simple study of racism and prejudice even among a seemingly superior race of people, who to that point had been completely unaware of color. A wonderful book, that I could have seen with a sequel were it not for the author's untimely passing. DYB

A Landmark Tale From A Literary Pioneer.

Published by Thriftbooks.com User , 16 years ago
For those who thought that Anne Rice and Joss Whedon had the last word on the vampire saga,this story will come as a startling and innovative revelation; one full of romance and peril, high drama and suspenseful intrigue. For those who yearn for some Science Fiction with a more multicultural range, with strong, relentless questions about gender preference, community- building and the folly of indulging intolerance at any level, this book represents the literature as true Speculation about the nature of humanity; where we've been, what we are, and who we can be. Welcome to the imaginative visions posed by world-renowned author Octavia E. Butler in her groundbreaking latest novel, FLEDGLING. Setting precedents is a Butler trademark, one which has drastically altered and expanded every literary field she's tackled for over 30 years. Before Butler, Science Fiction and African American Culture never crossed idioms in so boldly upfront a manner. Before Butler, for that matter, African American authors were rarely seen or recognized in any type of genre fiction other than what was deemed "Black enuf", often by the most narrow-minded of standards. Butler's steadfast persistence in forging her own literary perspective has long defied institutional stereotypes from all sides, and has come to represent a major, long-overdue expansion of African American authors into the varied corridors of American letters; from multimedial mavericks such as Thulani Davis and Dwayne McDuffie to singular trailblazers such as Mystery master Walter Mosley. FLEDGLING establishes a whole new facet in the Butler landscape. Expect no Draculas or Lestats here. No leering post-Victorian ghouls, no curse of lust-crazed, cancerous demonry, no forlorn predators taking to wing and commanding gross vermin lurk within these pages. In this take on the vampire saga, the focus is on family, tradition, and transition between the blood- nourished Ina and their equally life-nourished chosen humans; a focus broken when Ina communities are suddenly the targets of mindless, genocidal slaughter. Just who is responsible for these hate crimes, and the reason for such wanton terror, is at the heart of a thrilling odyssey which centers around an amnesiac child named Shori... and what she represents to all involved. The two-time Hugo and Nebula award-winner is known for her crisp dialogue and meaty characterizations, coming straight to the point and taking the reader into intricate scenarios of thought-provoking adventure. In FLEDGLING, the questions abound with gleeful yet sobering energy. Community or captivity? Evolution or eugenics? Vigilance or aggression? Erotic need, narcotic fixation, or simple loving? Those who have seen Butler weave these and other topics into the SF field over the decades will, nevertheless, be stunned by the sheer virtuosity and seeming ease with which she dances her points into the reader's eye here. Make no mistake about FLEDGLING. The Seven Stories P

Published by Thriftbooks.com User , 16 years ago
I am a fan of both vampire fiction and Octavia Butler, so learning last spring that her new novel would be about vampires was truly exciting. I have waited with great anticipation. I will say up front that the novel does not disappoint on either front. Indeed, while the novel is self-contained and reaches satisfying closure, the world she creates is interesting enough to warrant sequels and prequels. And I, for one, would welcome them. In Butler's other fiction, she has often concerned herself with themes of prejudice and power and, just as often, transformation. In taking on the vampire theme, she certainly allows these interests full development. Obviously, she also takes some unexpected twists in her vampires, drawing on familiar images of the (sub) genre, but taking them in fresh and interesting directions. Take, for example, themes of transformation. Typically, the vampire narrative concerns a protagonist going through "the change," embracing a new (un)life and letting go of his or her former humanity/mortality. Butler has certainly explored the theme of bodily transformation in other novels (e.g. Clay's Ark or the Xenogenesis series, to name a few). The vampires in Butler's novel, however, are a separate species on earth, co-evolved with humanity and full of their own laws and culture. Collectively, they call themselves "Ina." While they live in a mutually symbiotic relationship with (some) humans, they cannot transform humans into Ina. The Ina have their own careful and intricate systems of reproduction, which shape and guide their culture. Transformation in this novel has more to do with the Ina's interest in genetics, a study some of them have been pursuing long before it interested humans. One group of Ina has successfully engineered a vampire who can stay awake during daylight hours and can endure measured amounts of sunshine. They do this by splicing some African genetic material to their own, creating Shori, a black Ina alone in a world of very pale and mostly blonde Ina. This genetic innovation is, of course, causing a difficult (and unwelcome to some) transformation to millenia of Ina traditions. We meet Shori first as a nameless narrator coming to consciousness in a cave and discovering, as she heals, the burned out ruins of what she learns was recently her community. Shori suffers from a selective amnesia that allows her to recover language skills and the ability to recognize everyday objects as well as an innate understanding of her Ina abilities, but memories of her family and her past are lost to her. Her amnesia is a clever device that allows Butler to work through a structural necessity of nearly all vampire fiction: sorting through the various folklore of vampires to settle on her explanation of them, winnowing away "myth" from "truth." As Shori moves into other Ina communities, her transformation into vampire is more about rediscovery than the slow turning of human flesh into superhuman creature. However, to Butler's
Trustpilot
Copyright © 2022 Thriftbooks.com Terms of Use | Privacy Policy | Do Not Sell or Share My Personal Information | Accessibility Statement
ThriftBooks® and the ThriftBooks® logo are registered trademarks of Thrift Books Global, LLC