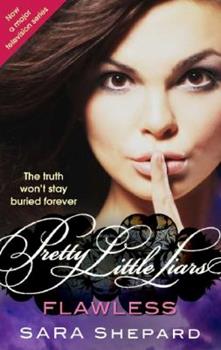 Published by Kaylatate46 , 2 years ago
Everyone should read these series of pretty little liars

Published by Thriftbooks.com User , 14 years ago
To start off with, this series is much better than what I've read of the Gossip Girl series. It's more indepth, the characters have each a conscience, their actions have direct consequences, and they inspired pathos. Four privileged young women hide a deep secret. They are just fine going about their lives until they started receiving strange text messages from a mysterious person who only refers to themself as "A". "A" seems to know way too much about each girl- private, personal stuff, as it happens. The last novel was an introduction to each of the characters. Aria continues to shoulders the burden of the secret of the last novel, Spencer continues to carry on a love affair with her sister's ex-boyfriend, Emily meets a boy that she sort of likes despite her sexual identity issues, and Hanna tries to turn over a new leaf, but, as usual, "A" threatens all that. I'm begining to suspect Spencer. She witnessed Toby's response to The Jenna Thing, and she discussed what happened while all the other girls were asleep at the slumber party with Ali. In the last book, I hardly sympathized at all with Hanna, but in this book, we're getting deeper into her psyche and relationship with her parents and how it affects all the other relationships in her life. I began to totally identify with her- can't please her parents, they're angry with her, but don't know the whole story and they won't listen to her side of the story, she can't do anything right. The portion of Spencer's story left me shaking my head at the end. A portion of Aria's story arc is done, but the original one, the one with her teacher, is promised to spice up. Emily's problems with her ex-boyfriend are going to explode in the next book, I'm sure. Each character is very unique and has their own voice and problems. I think Sara Sheperd is doing a great job with the writing on this. It's like Harry Potter suspense- I can't wait to see how it ends!!

Riddled with suspense, and a captivating cast of characters - a 'flawless' sequel

Published by Thriftbooks.com User , 14 years ago
Alison "Ali" DiLaurentis had the four B's of popularity: beauty, brains, body, and boys. She also had four amazing best friends - Spencer Hastings, Aria Montgomery, Hanna Marin, and Emily Fields. As if their friendship weren't enough, she also knew secrets about all of them. Secrets that no one else even suspected, from bulimia to unfaithful parents, and everywhere in between. Then, one day, just as the summer was beginning, Ali disappeared, leaving four friends weeping in her wake. While their sorrow was strong, Ali's sudden disappearance was also a bit of a relief. After all, now their secrets would never be revealed. But the fact that Ali's body had never been uncovered always left a slight hesitation in their mind. That is, until she was found under a pile of cement, proving that their secrets would stay dead and buried. But maybe they spoke too soon. After four long years, Hanna, Aria, Spencer, and Emily are brought back together to mourn at the funeral of their long lost best friend. But things hit a sour note when the mysterious "A" contacts all of them once more, threatening to reveal their secrets and pin the blame on them for "The Jenna Thing." As if the eerie note isn't horrifying enough, each girl is shocked to see that the police have re-opened Alison's case. Only this time it's being treated as a murder, leaving the four former friends open for police questioning at any time. To make matters worse, Toby Cavanaugh - Jenna's reform school brother - has returned to the quiet town of Rosewood, attending nearby Tate Academy. And, while the former geek turned hottie seems harmless enough this time around, there's a mischievous glimmer in his eye that's leaving everyone on edge. It doesn't help that, since Toby's sudden arrival, "A" has been sending more and more notes. Making threats, demanding them to perform certain acts, and even spying on their every move. While the girls know that they should confide in one another regarding "A's" sudden attacks, they can't bring themselves to reveal such intimate, and oft-times embarrassing, details to one another. It doesn't help that a sense of mistrust has grown between all of them over the years, pushing them more into the acquaintance category, as opposed to the friend category; or that they're all facing certain dramas in their lives right now. Dramas that could tear them apart, and ruin their lives in a heartbeat. From the arrival of a deadbeat dad, to the rekindling of a forbidden romance, and even moving into trusting a former enemy territory. Spencer, Hanna, Emily, and Aria think that they'll be able to handle the newest drama on their own. But, as "A" moves closer in their direction, they begin to realize that if they're not careful, they may just be buried alive by their many scandalous secrets. While Sara Shepard's debut, PRETTY LITTLE LIARS, gave readers a character sketch, a surface look, if you will, at Hanna, Spencer, Emily, Aria, and even the missing Ali; FLAWLESS brings us back t

Published by Thriftbooks.com User , 14 years ago
Flawless is a book about four girls(Spencer, Hannah, Emily, Aria) who are trying to figure out who "A" is. "A" has been sending all the girls weird texts that tell secrets only their dead BFF Alison knew. At first, everyone thinks it's Toby. Toby was Jenna's step brother and everyone thinks he killed Alison and that he is "A". Untill Toby dies. The texts keep coming and the girls are scared their secrets will be told. "A." is threatining the girls that they will tell there secretes if they don't do what "A" wants. The girls must figure out who "A" is and who killed Alison. This book is so adicting. You never want to stop reading it. They never say who "A" is. You always think it will say in the next book, but it doesn't. Ypu keep buying her books because you want to know.The only thing wrong is the books get kind of slow in the middle. But other than that, this is a truly amazing book that was done very well.

Even Better Than The First One!!!!

Published by Thriftbooks.com User , 14 years ago
I loved this book so much. The characters are really becoming familiar and well developed. I can't wait for the third book in this fun series.

Published by Thriftbooks.com User , 14 years ago
FLAWLESS, the second book in the PRETTY LITTLE LIARS series, creates some serious questions for readers. But like many books in a series, you should only read this second book if you've read the first, to get the full effect! You wouldn't want to ruin a good book! In FLAWLESS, an unexpected person dies, and the girls continue to get more notes from someone named "A." The identity of "A" is still the big, looming question in this book! Some unanswered questions about Aria, Hanna, Emily, and Spencer are answered. Some of the things that we all wondered from the first Pretty Little Liars book are also answered. But there are definitely still things that I wanted--and needed--to know! After I read PRETTY LITTLE LIARS, I knew I had to read the sequel! But now, with FLAWLESS, there are still so many unanswered questions at the end that we'll have to read the entire series, including book three (Pretty Little Liars #3: Perfect (Pretty Little Liars)), to find the answers! Reviewed by: Taylor Rector
Copyright © 2020 Thriftbooks.com Terms of Use | Privacy Policy | Do Not Sell My Personal Information | Accessibility Statement
ThriftBooks® and the ThriftBooks® logo are registered trademarks of Thrift Books Global, LLC