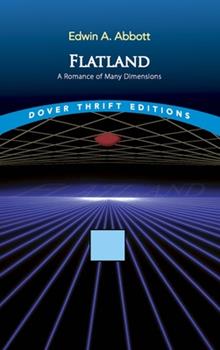 Flatland: A Romance of Many Dimensions

by Edwin A. Abbott and A K Dubey

Classic of science (and mathematical) fiction -- charmingly illustrated by author -- describes the journeys of A. Square and his adventures in Spaceland (three dimensions), Lineland (one dimension) and Pointland (no dimensions). A. Square also entertains thoughts of visiting a land of four dimensions -- a revolutionary idea for which he is banished from Spaceland.

Published by Thriftbooks.com User , 12 years ago
Everyone should read this book at some time in their life. It makes you realize the limitation of our physical senses.

Published by Thriftbooks.com User , 15 years ago
Flatland is a unique and brilliant treatise on a trifurcated level. It is a sociological statement, a mathematical statement and a religious statement all rolled into an incredibly astute 82 pages. The book centers mostly on the differences between a two dimensional world and a three dimensional world; but comments on society, law, prejudice, religion, and proselytizing. The book especially points out the difficulty in envisioning a greater reality and a greater vision than is commonly observed by any individual in any dimension or society. The author's premise relates to things existing in a "plane geometry" world as opposed to a "Euclidian Geometric" three dimensional figure universe. The book carefully illustrates to one denizen of Flatland how the three dimensional world of space works and/or exists. Upon finally understanding the "Gospel of Three Dimensions" our protagonist goes on to try and apply the same arithmetic logic and geometric analogs to a fourth dimensional universe. Shouldn't there exist a fourth dimensional universe that allows an entity to look down upon the three dimensional universe with as much transparency as one can from three dimensions to two? Alas, things become different in dimensions other than the first, a world of lines, the second, a world of shapes and the third, a world of objects. In the zero dimension, all things are a point. Mathematically we know that any number raised to the "0" power equals 1 and therefore, all things in the zero dimension resolve into one single omnipotent point. This condition would also exist in the fourth dimension; as those of us in the third dimension have no model to compare it to. Envisioning a fourth dimension, even with time as the fourth dimension is truly difficult or impossible for us in the third dimension. Interspersed with this witty and intellectual dialogue are comments on society and its structure. He specifically comments multiple times of the degradation of women in society to the lowest social status. Only men are educated in Flatland. Interestingly, he paints a picture of an authoritarian society in which people are judged by their shapes and angles. This reflecting the Victorian societal values around him at the time of his writing. Flatland is recommended to all those who seek to enlighten their view of the universe and of potential universes. It is especially recommended to those seeking higher knowledge of any type. Flatland is truly a multi-dimensional experience and worth every minute.

Combines math with magic and fun!

Published by Thriftbooks.com User , 15 years ago
With the Alice in Wonderland books, the late 1800s seem to have been the time for really creative mathemetical writing. Although not as frequently read, Flatland, the Edwin Abbott Abbott story of a little square coming to understanding that higher dimensions do indeed exist outside his world is a delightful read. For those seeking to understand what life is like in other dimensions, Flatland is very comprehensible with clear writing and simple, easy to understand illustrations that help drive home Abbott's points. Originally written with many sly references to the then existing state of British culture, Abbott's invitation to try and understand higher dimensions was also an invitation to society of his time to try to re think its views on a myriad of issues...including its openness to women in education. In this way, Abbott converted viewing higher dimensions into both a mathematical and social challenge...points Stewart was sensitive to in his annotations and his own homage, Flatterland. Although other editions of this work exist, the annotated Flatland is the one to buy both because of its faithful reproduction of the original and its thought provoking and helpful footnotes that give the work broader meaning.

Published by Thriftbooks.com User , 17 years ago
Written over a hundred years ago, this book by Edwin A. Abbott is still by far the best introduction to the mathematics of many dimensions. This does not mean that it is a college-text-type of math books that contain complicated derivations and proofs. It is a novel. Ian Stewart's commentary makes it even easier to understand. Even the appendix written by Stewart is a valuable read which gives a brief intro to 4-dimensional mathematics.

A dazzling masterpiece of literature.

Published by Thriftbooks.com User , 22 years ago
Abbot was passionate about addressing a Christian concern that I share: differentiating mere superstition from the supernatural. Flatland was written with this in view: to make a parabolic case for the dynamic of the "higher order" of things and how it would thus relate to us. It is also hilarious social and spiritual satire. While often portrayed as a treatise on mathematics, the math was only the idiom. He was trying, by way of parable, to show the rationality of belief in the supernatural. The first half of the book is a set-up for the second half where the action takes place. The first time I read it (age 17) I thought it was a bit tedious till I got to the middle. But the first half must be read for the MIND BLOWING second half to make sense. When older and on second read, the first part is now my favorite. For Abbot is not just describing Flatland, he is satirically lampooning Victorian culture, priggery and prejudice. To think how this book must have made people's blood boil back then, just as it does now! As for style, Abbott has a way of constructing a phrase that is just plain delicious once you get into the flow of it. He waxes most eloquent (in the voice of the "square" narrator) when he is most absurd and wrong, and this--you must admit--is a little too close for comfort as well.A friend of mine called me at 4am several years after I gave him Flatland, having finally read it straight through, and said "I think I now 'get' the Revelation!" I hope it has a similar encouraging effect on you--either by humorous, pithy satire or spiritual insight.
Copyright © 2020 Thriftbooks.com Terms of Use | Privacy Policy | Do Not Sell My Personal Information | Accessibility Statement
ThriftBooks® and the ThriftBooks® logo are registered trademarks of Thrift Books Global, LLC