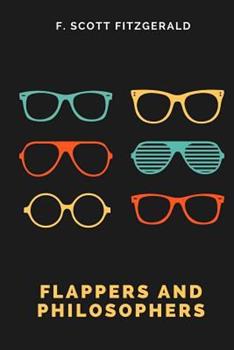 Fans of The Great Gatsby are in for a treat. Flappers and Philosophers is a collection of eight short stories by F. Scott Fitzgerald, including many of his best: The Offshore Pirate, The Ice Palace, Head and Shoulders, The Cut-Glass Bowl, Bernice Bobs Her Hair, Benediction, Dalyrimple Goes Wrong and The Four Fists .

Published by Thriftbooks.com User , 16 years ago
``Flappers and Philosophers'' was F. Scott Fitzgerald's first short-story collection. It's an entertaining group, brimming with the spirit of youth. The author's first published novel, ``This Side of Paradise,'' sold well. To capitalize on this publisher Charles Scribner collected eight of Fitzgerald's magazine stories and published them in a single volume in September 1920. The collection contains two of the author's best-known short works -- ``The Ice Palace'' and ``Bernice Bobs Her Hair.'' Fitzgerald shows considerable skill in depicting horror in ``The Ice Palace'' as well as ``The Cut-Glass Bowl.'' Although Fitzgerald wrote to H.L. Mencken that ``Bernice'' was ``trash,'' the story is strong in showing the workings of peer pressure and popularity seeking. ``Flappers and Philosophers'' was dedicated to Fitzgerald's wife, the spirited and mercurial Zelda. Fittingly, we meet a Zelda on the very first page -- Ardita Farnam of ``The Offshore Pirate.'' ``Pirate'' is a romance that dwarfs contemporary Harlequin-type gruel. Most of the stories have at least one good plot twist. ``Dalyrimple Goes Wrong'' and ``Head and Shoulders'' are the best of the twisters. ``Four Fists'' rings a bit hollow but it's well written. ``Benediction'' is the weakest story in the group. The brother and sister constantly using each other's names was grating. The hint of incest turned me off doubly. ``The Cut-Glass Bowl'' was my favorite. The collection ought to be read and put in context by students of Fitzgerald. Students should know that these stories are what made Fitzgerald known to the American reading public during his lifetime. Today Fitzgerald is known for ``The Great Gatsby,'' a, if not THE, masterpiece novel. But ``Gatsby'' was a commercial flop during the author's lifetime. What fueled Fitzgerald's celebrity in the 1920s and what paid his considerable bills was short stories. So buy and read ``Flappers and Philosophers'' as well as ``Tales of The Jazz Age'' to see why pre-Depression America fell in love with F. Scott Fitzgerald.

Published by Thriftbooks.com User , 18 years ago
Fitzgerald's stories manage to unite his otherworldly grasp of the fluctuations in the human soul. He is a master at presenting its contrivances and vanities as things that happen to people. The tension in these tales rises with almost unconscious force. Red herrings of possible conclusions are whispered but almost in the style of a trickster. Someone always gets conned and someone unmasked- all within that now long-gone era that held a fullhouse of interesting details and premonitions of an ominous future. "Beatrice Bobs her Hair" always has something more to say about savage young ladies. It deserves its place, I think, in every highschool English curriculum. The spoiled rich girls inevitably fall madly in love- with the cads or the tricksters. It was interesting to read "Benediction" in this era of the priest scandals. How priests were seen by Fitzgerald, or perhaps how he conceived his alter ego- is apparent in his return to his natural self through the heroine's choice at the end. This writer always has a trick up his sleeve for the unpredictable conclusion. I am surprised that there are not more raves over this collection, but perhaps that is the nature of the post modern era. I on the other hand -rave. Story, resolution, all those little formulas that separate the artist from the amateur in the impossible short story form. Fitzgerald, except for perhaps in Gatsby, never achieved such form and plotting in his novels. His youth too, can be sensed in the humorous and rather light-hearted manner by which he casts his characters and those obstacles that they encounter.

Published by Thriftbooks.com User , 19 years ago
Fitzgerald may not have been overly fond of his short stories, but his writing skill and insight shine through anyway. In The Ice Palace and Bernice Bobs her Hair and the Four Fists in particular, Fitzgerald captures individuals struggling with themselves. Who/what should they be, and why? While I wasn't too fond of the pirate story, as it lacked these elements, the other stories in the book show a depth of understanding and introspection that makes for a wonderful, thoughtful read.

A good sampling of Fitzgerald

Published by Thriftbooks.com User , 21 years ago
This collection of short stories takes a candid look at America in the early 20th century. There isn't a stinker in the lot, but I think "Bernice Bobs Her Hair" is my favorite. Fitzgerald has a way of making his readers connect with unlikeable characters that seems almost magical.

A book hard to put down.

Published by Thriftbooks.com User , 23 years ago
The book was great. It included some of Fitzgearld's best short works. It was hard to put down during a story. The emotions of the character are real for their time period.
Copyright © 2020 Thriftbooks.com Terms of Use | Privacy Policy | Do Not Sell My Personal Information | Accessibility Statement
ThriftBooks® and the ThriftBooks® logo are registered trademarks of Thrift Books Global, LLC