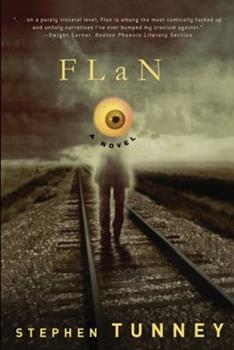 Originally published in 1992, this controversial novel tells the story of a young man named Flan who undertakes a harrowing journey through a charred and burning American landscape in search of his girlfriend, Holly. Accompanied by his talking fish Ginger Kang Kang, Flan follows destroyed railroad tracks through an ashen world gone completely mad with violence, barbarism, and cruelty where unimaginable suffering becomes laced with absurd comedy and...

Published by Thriftbooks.com User , 14 years ago
a surreal mixture of absurdist comedy and horror, Flan is a beautifully written post -apocalyptic "poem" about the lead character who makes his way through a landscape of mutilation and horror to find his girlfriend who is staying in a cabin in the woods. Far superior than Cormac McCarthy's "The Road", and it was written years before!

Published by Thriftbooks.com User , 20 years ago
If you enjoyed William S. Burroughs cut-up experiments and old Bugs Bunny cartoons you will love Flan.

Published by Thriftbooks.com User , 23 years ago
Stephen Tunney takes his surreal art and transfers it from canvas to type in FLAN. The atmosphere and dialogue is extremely abstract and full of energy. In a few words, the book is an absolute pleasure to read. One could get quite esoteric and pseudo-intelligent about what the author is "trying" to say, but simply put it is a surreal rollercoaster ride. I highly recommend this book to a certain genera of readers. FLAN is definitely not for everyone. I have given the book to a few friends who put it down after a few chapters. However, the individuals that I gave the book to that enjoyed it, fell in love with it. If you enjoy surreal,random,dark humor or drama I can promise you that you will love this novel. Bravo Stephen.

The realization of the madness we all contain

Published by Thriftbooks.com User , 23 years ago
Flan; a person with doubts, wants and desires, needs and hopes. He is lost in a world of madness in which there is no escaping, only the gruesome realization that what seems real, really is.The book begins with Flan realizing that is room (his own private world) is on fire. Seeing his own peril he rushes to save two dear things to him, his tupee and his fish, Ginger-Kang-Kang. He places the tupee on his head and his fish in the front pocket of his night shirt and rushes out the door and down the stairs of the apartment building. When he finally gets outside, he is confronted with the outside world. Horrors abound and Flan is sickened by the sights he sees. It is important when reading this book, in my humble opinion, to let go of reality, to see things the way they appear to be and not the way they are, for Flan sees terrible things, but I believe them to be more metaphorical then some of my colleges. Flan sees the insanity of the world, the things we all ignor! e and have for so long that we don't even see them any more, betrayal, murder, death, and most importantly hope. Flan sees the hope that there is a better place somewhere, for him it is with his girlfriend Holly who has escaped this horror by being in the mountains. Fueled by his dreams of Holly and a place where things have kept their sanity.He escapes and has many adventures and lessons along the way. Along the way, he meets a dog with a human head named Micheal. Micheal gets attached to Flan, but Flan gets disgusted at Micheal's nature. Micheal replys that even though he may have the head of a human, he is still a dog by nature. Flan is disgusted and runs away. Micheal follows Flan at great lengths, but dies before he can reach Flan.Interestingly, both Flan and Micheal are very similar they both have goals which transmogrify to become more than what they truly are or ever were. For Micheal, his idea of Flan changes into that of some kind of Demi-God. For Flan, his ide! a of Holly transmogrifies completely into something complet! ely different. Holly living in a cabin on the top of a hill in the woods turns into Helen living in a castle on a mountain in the forest. Queen is Helen watching Flan progress across the "Torn burnt up land". Ultimately Flan destroys all of his friends who helped him reach his goal, only to discover that Helen is not at the top of the mountain, and neither is Holly, only the reality that he has denied since the beginning.Overall, the story is very well written calling upon techniques of writing, which remind me of Burroughs, Kerouac, Joyce. It is crazy to think of a a madman as a prophet, but it is sane to follow his wisdom.

Tunney has the most imaginative writing style ever

Published by Thriftbooks.com User , 24 years ago
Flan has to be one of the most descriptive books I have ever read. There were parts where I couldn't believe one could imagine such things. It is a very captivating book that I could not put down.
Trustpilot
Copyright © 2022 Thriftbooks.com Terms of Use | Privacy Policy | Do Not Sell My Personal Information | Accessibility Statement
ThriftBooks® and the ThriftBooks® logo are registered trademarks of Thrift Books Global, LLC