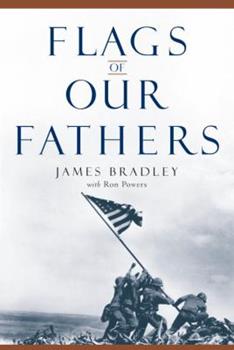 Flags of Our Fathers

Published by Thriftbooks.com User , 3 years ago
I thought I knew about Iwo Gema and now I know a more personal side. Flags of Our Fathers introduces you to the men who raised the American Flag on Iwo Jima and the most Famous picture of WW II. I have read this book at lease three times. I received it as a gift on Veterans Day and started it that night, I could not put it down, when I finished it I started Reading it again. I feel this is a must read for every one

The battle for Iwo Jima was hell on earth

Published by Thriftbooks.com User , 17 years ago
The battle for Iwo Jima has always been somewhat overshadowed by the Allied invasion of Normandy in June of 1944. While the bulk of the bloodshed at Normandy was over in one day, Iwo's bloody battle raged for a month. The defining and everlasting image of Marine glory on Iwo is 'The Photograph', which captured five Marines and a Navy corpsman raising the American flag atop Mount Suribachi. Author James Bradley recounts the battle American soldiers fought on the island as well as the truth behind Joe Rosenthal's timeless photograph. Bradley's own father, John, was one of the six flag raisers; yet barely spoke a word of to anyone for the remainder of his life. After John Bradley's passing, James began uncovering his father's role on Iwo Jima, as well as the other five flag raisers. He recounts each of their lives, progressing from childhood through military training through Iwo Jima and after. Bradley's book vividly illustrates the true horror of war in describing the slaughter, courage and heroes of Iwo Jima. Highly recommended.

Flags of Our Fathers - a memorable book

Published by Thriftbooks.com User , 18 years ago
This is a most moving book about heroism born of necessity; of ordinary men who, as young marines, were propelled into the hideous island battles of the Pacific during WW2. The book tells the stories of the men who raised the flag, of those who died and those who lived, and what happened to them afterwards. Ex-combatants sometimes find that peacetime doesn't bring happiness and the story of Ira Hayes' inablity to cope is poignant. The one who found peace, the author's father, was the one who was able to let go.This book introduced me, a European, to a part of the war I'd known little about. It also, to my astonishment, challenged my revulsion about the use of the bomb. It puts into context the military realities of the time and the likely human cost of an invasion of Japan.This is a human story, well told with honesty, compassion and pride.

Published by Thriftbooks.com User , 22 years ago
Stephen Ambrose said it himself on the back of this book, "The best battle book I ever read. These stories, from the time the six men who raised the flag at Iwo Jima enlisted, their training, and the landing and subsequent struggle, fill me with awe." This is a dramatic story of Iwo Jima; I absorbed every word of every page with intensity. It brought me to tears and, at times, made me laugh. I felt I was crawling with the Marines yard by yard as they moved across the small island under intense fire from the Japanese. The pictures James Bradley produce will stay in my mind for a long time, at least until I read the book again. I keep seeing his father, Doc, administering first aide to a wounded Marine. Knowing the wounded soldier could quickly bleed to death, Doc covered the soldier with his own body as he administered first aid while bullets exploded around him. Doc won the Navy Cross for this heroic action. The book doesn't just cover the fighting on the island, but follows the survivors of the six flagraisers back to the states. Their heroic welcome home involved them as part of a push to sell war bonds. James Bradley finally brings to end myths of the raising of the flag, e.g. that it was staged and that it was at the end of the fight for Iwo Jima.From the very beginning of the book I was thankful for his father and the others that fought for our freedom on that small island in the Pacific. I wish I could thank all the veterans for their sacrifises made on Iwo Jima. Since I can't, I can thank James Bradley for bringing the story of his father and the other five flagraisers into my life. You'll be thankful, too. Bradley should receive a Pulitzer Prize for this incredible book.

This is a MUST-READ!

Published by Thriftbooks.com User , 22 years ago
James Bradley's tale of the six boys who raised the Old Glory over the island of Iwo Jima (one of whom was his own dad) is a classic of war literature. It is a father-son story. It is a war story. It is a story of patriotism and sacrifice. But ultimately it is the story about how ordinary people can rise to extraordinary heights in fantastically dangerous situations. Inspired and inspirational, this book is must-reading for anyone even remotely interested in World War II, and in the sacrifices that certain Americans made in order to win it.This Memorial Day, buy a copy for everyone you know!

Published by Thriftbooks.com User , 22 years ago
No, this isn't John Wayne and "Sands of Iwo Jima". This is a story of American youth and a time of American innocence.Who were these six young, skinny kids in this photograph? A photograph that has become an icon of our times. Three of them would never know what impact this photo and their actions had on a country. Three others would know only too well.I sincerely thank James Bradley for taking on this very personal and very emotional subject. His father, PM2C John Bradley, USN must have been made of greater stuff than most folks. His son's book is one of the most fitting tributes to a father's memory I could ever imagine.My most heartfelt best wishes go out to James, his mother and all the Bradley's.
Trustpilot
Copyright © 2022 Thriftbooks.com Terms of Use | Privacy Policy | Do Not Sell or Share My Personal Information | Accessibility Statement
ThriftBooks® and the ThriftBooks® logo are registered trademarks of Thrift Books Global, LLC