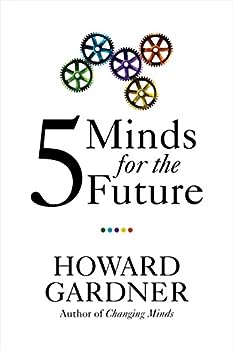 Five Minds for the Future

We live in a time of relentless change. The only thing that's certain is that new challenges and opportunities will emerge that are virtually unimaginable today. How can we know which skills will be... This description may be from another edition of this product.

Five Minds for the Technology Professional

Published by Thriftbooks.com User , 14 years ago
Howard Gardner, Hobbs Professor of Cognition and Education at the Harvard Graduate School of Education, is a psychologist and author known for his theory of multiple intelligences. Application of his theory, especially for education, has been controversial. But I think his latest book, Five Minds for the Future, is a must read for technology professionals. His thesis is that, "...vast changes that include accelerating globalization, mounting quantities of information, the growing hegemony of science and technology, and the clash of civilizations," requires, "capabilities that, until now, have been mere options." He describes "Five Minds," or cognitive abilities that will command a premium in the years ahead: 1. The Disciplinary Mind -- the mastery of major schools of thought (including science, mathematics, and history) and of at least one professional craft. 2. The Synthesizing Mind -- the ability to integrate ideas from different disciplines or spheres into a coherent whole and to communicate that integration to others. 3. The Creating Mind -- the capacity to uncover and clarify new problems, questions and phenomena. 4. The Respectful Mind -- awareness of and appreciation for differences among human beings and human groups. 5. The Ethical Mind -- fulfillment of one's responsibilities as a worker and as a citizen. While the book is not directed specifically at technology professionals, I found much of what he said echoed characteristics of the most effective people I know: deep domain expertise, intellectual curiosity, creativity, global perspective, knowledge of and respect for diverse cultures, and teamwork. It is and will continue to be possible for anyone with a few of these characteristics to succeed in technology, but I believe those who excel and assume positions of leadership will exhibit all of these abilities.

If you want your Child's Mind Left Behind do not read this.

Published by Thriftbooks.com User , 15 years ago
The ideas in this book deserve the broadest possible scrutiny and review. As we now know, our brains are able to significantly change themselves depending on how they are used and not used. Dictators, slave owners, and totalitarian regimes have always suspected this. They carefully restrict the arts and depend on rote drill in education. They require competency testing that penalizes teachers that teach good questioning methods and foster disciplined minds that can synthesize, create, and empathize. Teachers in the USA today are increasingly being overwhelmed by the requirements to teach facts and specific skills. School facts are often dated, while updates are instantly available via an Internet search. Thinking abilities (other than rote memorization) are not being taught because our tests are not well designed to assess Gardner's categories. The ability to synthesize (transfer and apply what we know from an array of experiences and sources), create (the ability to think divergently and imaginatively to produce better scenarios), and/or empathically (Gardner's terms are `respectful' and `ethical') are not as simple to assess. Consequently, facts are taught without time to learn how to question the viability of what is learned. Assessment tools could be vastly improved if we had the creativity and the will to see what Gardner tries to tell us. I believe that computer programs could be developed that would assess education for Gardner's mind categories rather than simply for the rote accumulation of information that is often unconnected to what we need in life. Any parent who does not care if their child's mind is left behind should not read this book. I pity children in schools that are under pressure to focus on learning without thinking. They are being brain damaged. If we want to see more capable and caring people in the future, this book is a starting place. Any leader of company, political entity, or other organization should not read this book if they are content with staying behind and coming in last.

A Map for Educating the New Philosopher Kings

Published by Thriftbooks.com User , 15 years ago
The learned ancient Greeks were fascinated by what an ideal education would involve. Why? They hoped to apply that education to the kings of the era and to create a better society through the leadership of the kings. That ambition came closest to being fulfilled through Alexander the Great, who became a highly effective conqueror and spreader of Greek ideas and values. Professor Gardner takes up this challenge once again in perceiving new challenges for modern people that will be more difficult to meet in the future. I suspect that his vision is, in part, aimed at the same goal as the ancient Greeks except as executed through the leaders and most prominent citizens of a republic employing democratic principles. In a break from his prior focus on multiple intelligences, Five Minds for the Future emphasizes five methods of thinking that he hopes to see integrated into individuals. These methods of thinking are based on: 1. Mastering an important subject matter (such as history, math, or science) and staying up to date through application of the discipline's method of thinking. This is quite different from knowing the facts of the discipline. 2. Being able to integrate large quantities multidisciplinary facts and apply them into one's work. 3. Posing new questions, developing new solutions to existing questions, stretching disciplines and genres in new directions, or building new disciplines. 4. Being open to understanding and appreciating the perspectives and experiences of those who are different from the individual. 5. Doing one's work in an ethical way that reflects responsibilities to others and society. What does this boil down to as a problem? Basically, most people never get as far as mastering one important discipline. They just memorize whatever is needed to pass tests. Professor Gardner's own work documents this problem. As a result, we face a hollowing out of our civilization as most people lack the ability, education, or interest to do more than function in an everyday living fashion. Beyond that, some of those who can perform a discipline are tempted by treasure or fame to stretch the rules and not honestly perform. If we step back another few feet, there's an implicit vision of a future that's led by a smaller and smaller number of people as a percentage of the world's population. It will be easier for rot to set in at the top. In addition, the rewards for those people will grow exponentially . . . tempting those of limited ethics to falter. I think the risk is a genuine one, and I applaud Professor Gardner for penning this book. I hope he will follow it with more books that spell out more about how to educate others and ourselves (after we leave school as students) so that these goals are achieved. I have a few quibbles that I mention only in the spirit of sparking an awareness of what's needed. Peter Drucker taught me that the educated person should learn enough about a new subject each year to

On nurturing "potentials that are distinctly human"

Published by Thriftbooks.com User , 15 years ago
I have read and reviewed all of Howard Gardner's previous books and consider this, his latest, to be the most valuable thus far. In it, he identifies and explains five separate but related combinations of cognitive abilities that are needed to "thrive in the world during eras to come...[cognitive abilities] which we should develop in the future." Gardner refers to them as "minds" but they are really mindsets. Mastery of each enables a person: 1. to know how to work steadily over time to improve skill and understanding; 2. to take information from disparate sources and make sense of it by understanding and evaluating that information objectively; 3. by building on discipline and synthesis, to break new ground; 4. by "recognizing that nowadays one can no longer remain within one's shell or one's home territory," to note and welcome differences between human individuals and between human groups so as to understand them and work effectively with them; 5. and finally, "proceeding on a level more abstract than the respectful mind," to reflect on the nature of one's work and the needs and desires of the society in which one lives. Gardner notes that the five "minds" he examines in this book are different from the eight or nine human intelligences that he examines in his earlier works. "Rather than being distinct computational capabilities, they are better thought of as broad uses of the mind that we can cultivate at school, in professions, or at the workplace." The "future" to which the title of this book refers is the future that awaits each of us. That is, Gardner is not a futurist in the sense that others such as Ossip K. Flechteim, Bertrand de Jouvenel, Dennis Gabor, Alvin Toffler, and Peter Schwartz are. If I understand Gardner's ultimate objective (and I may not), his hope is to help as many people as possible -- regardless of their age, gender, and circumstances -- to cultivate their minds by taking full advantage of any and every opportunity available to them; moreover, to do all they can to enrich and then sustain the same process of cultivation initiated by others. He concludes his book as follows: "Perhaps members of the human species will not be prescient enough to survive, or perhaps it will take far more immediate threats to our survival before we can make common with our fellow human beings. In any event the survival and thriving of our species will depend on our nurturing of potentials that are distinctly human." Some may view these comments as being naïve but I do not. On the contrary, I view them as an eloquent assertion of what is imperative, yes, but also as a sincere affirmation of what is possible.
Trustpilot
Copyright © 2022 Thriftbooks.com Terms of Use | Privacy Policy | Do Not Sell My Personal Information | Cookie Preferences | Accessibility Statement
ThriftBooks® and the ThriftBooks® logo are registered trademarks of Thrift Books Global, LLC