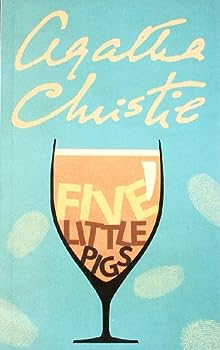 (Book #22 in the Hercule Poirot Series)

In Agatha Christie's classic, Five Little Pigs, beloved detective Hercule Poirot races to solve a case from out of the past.Beautiful Caroline Crale was convicted of poisoning her husband, but just... This description may be from another edition of this product.

A Little Slow, But A Nice Deduction by Poirot

Published by Thriftbooks.com User , 13 years ago
I have always been a bit torn over this book. The underlying plot and the solution and reasoning the Poirot comes up with is rather fascinating, but the retrospective format of the book makes it a tough read at times. I am a Christie fan, but this is certainly not one of her better books. In this book Poirot is engaged by a young lady whose mother was convicted of murdering her father some years ago. The child grew up with relatives, and was too young to remember the incident at the time. When she comes of age, she finds out the "truth" and wants Poirot to clear her mothers name before she gets married. The reminder of the book is mostly composed of either written accounts of the murder, or interviews with the principal characters. The problem is that much of the information is almost given twice, in that Poirot interviews the subjects, and then has them provide a written account. The book moves slowly, and is really not very interesting even when Christie throws out some obvious clues. The one thing about this book is that the mystery is very solvable by the reader. I head guessed at least some of the major points before the classic Poirot wrap-up. I did, however, still find the final solution interesting and Poirot's reasoning interesting as well. Overall, not a great Poirot book, but not a waste of time!

The one that I enjoyed the most so far

Published by Thriftbooks.com User , 19 years ago
For many years I didn't read any of Agatha's books, deceived by the unspoken prejudice against all writers of mystery novels, that somehow they're not "real" writers, as if they stood to literature like entertainers stand to "genuine", quality artists and performers.I liked some of the adaptations I saw of her works though, and always had a soft spot for "Murder on the Orient Express" so I finally gave in and became a fan, especially of Hercule Poirot. I didn't think her work could bring me any more surprises, so many books later.So I was delighted at how much I loved this one. It has all the characteristics that have made her dear to me, especially as an author, for these things are sometimes nowhere to be found in adaptations one sees: characters who are basically mouthpieces to Agatha's views on the world and life; the way Poirot's ridiculousness makes him so easily underestimated by friends and foes alike; and in Agatha's mysteries the crime and whodunit is merely a pretext to watch and observe and reflect upon people whom you become more and more fascinated with, sometimes just because you're watching. It's like Hitchcock's "Rear Window", but some decades earlier.I even fell into the trap of thinking that this time I had guessed correctly who the killer was, something I never do. What for? Agatha always beats me, and this time was no exception. I particularly loved the ending, the best I have ever read in any mystery novel and, to me, eerily reminiscent of Conan Doyle's "The Blue Carbuncle".For those who feel curious, the painting that is described as a blind girl sitting on an orange is by George Frederic Watts and is called Hope because the harp she's holding has only one string left but she doesn't give up playing upon it.

Poirot Solves the case of the Five Little Pigs

Published by Thriftbooks.com User , 21 years ago
This classic Christie was published in Britain as "Five Little Pigs" and in the US as "Murder in Retrospect" because Poirot must solve a crime that took place 16 years before the story opens. Dame Agatha wrote this during the 1940's, a period that critics agree was when she did her best work. The crime in this book is the murder of the brilliant painter Amyas Crayle. His wife is convicted of the crime and sent to prison. However, their daughter is now of age and receives a letter from her mother professing her innocence. The daughter turns to Hercule Poirot for help. If the wife is innocent, Poirot must look at the five people who were present at the time of the crime---hence, the five little pigs. And in true nursery rhyme fashion one little pig went to market (finanacial counsellor), one little pig stayed home (thanks to an inheritance), one little pig had roast beef (had made a good marriage), one little pig had none (retired teacher with limited income), and one little pig cried all the way home (the woman with a disfiguring facial scar).One of the most interesting aspects of this book is that Poirot will get an account of the murder from each of the five characters. At the end of these five accounts, you will have all the information that Poirot has and can try your hand at out-detecting the master.This is a great detective story and one of the best by Agatha Christie.

Published by Thriftbooks.com User , 24 years ago
As the other reviewers have pointed out, FIVE LITTLE PIGS is probably Agatha Christie's sole display of literary merit. Beautifully written prose and complex, well-crafted characters, along with the usual ingenious plotting and structure, combine to form a pretty nice piece of work. The stunning solution will undoubtedly leave readers satisfied, but the whole story and the dark, rather moody atmosphere it carries evokes a sense of sorrow that may last for a long time. A powerful, haunting masterpiece, FIVE LITTLE PIGS is vintage Christie, and her only book in which she showed that she possessed talents beyond her ability to construct a detective novel.

The best Christie nobody knows about

Published by Thriftbooks.com User , 24 years ago
While Five Little Pigs is not nearly as popular as Christie's well-known works like And Then There Were None and Murder on the Orient Express, it is just as well done. Known as a mastermind plotter but a mediocre writer stylistically, Christie does some of her best writing in this book, making evocative but subtle use of literary imagery and symbolism. Though use of 'written' accounts and flashbacks contrasted with present time, Christie also does some of her best character development in this book. You really get a strong, well-rounded sense of the main characters in Five Little Pigs. Beyond just its literary merits, it is also an excellent mystery novel. Many of the clues come in the form of dialogue, and if you interpret them correctly you might arrive at the solution. Pay attention to the literary imagery-- it also contains clues. The book ends powerfully with a moving sense of poetic justice. Most importantly (for a detective novel) the solution comes across truthful, satisfying and gives the sense that the author "played fair" -- she didn't withhold vital information. Because of the character development, Five Little Pigs has the potential to appeal to a wider audience than just mystery fans. Read It! I consider this book to be one of Christie's Top Five Novels.
Trustpilot
Copyright © 2022 Thriftbooks.com Terms of Use | Privacy Policy | Do Not Sell or Share My Personal Information | Accessibility Statement
ThriftBooks® and the ThriftBooks® logo are registered trademarks of Thrift Books Global, LLC