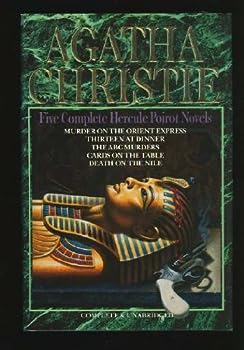 Five Complete Hercule Poirot Novels: Thirteen at Dinner / Murder on the Orient express / The ABC Murders / Cards on the Table / Death on the Nile

This description may be from another edition of this product. Complete & Unabridged Agatha Christie: Five Complete Hercule Poirot Novels - Murder on the Orient Express / Thirteen at Dinner / The ABC Murders / Cards on the Table / Death on the Nile

Published by Never Received The Book , 1 year ago
Unbelievable What Horid Condition. I Can Not Read It The Pages Are Brown.

Thirteen at Dinner by Agatha Christie

Published by Thriftbooks.com User , 11 years ago
Lord Edgware Dies: first published as Thirteen At Dinner in the U.S. in 1933 Stage actress, Jane Wilkinson, no longer wants to be married to her cruel husband, Lord Edgware. In fact, she has made it known publicaly that maybe she should take steps to kill him so she can marry again. Furthermore, she goes to Hercule Poirot to ask for his assistance. Naturally, M. Poirot cannot and will not accomodate her wishes but when shortly thereafter Lord Edgware is discovered murdered in his library all eyes look to Lady Edgware--except she has a rock solid alibi. Or does she? This case was one of the most difficult for Hercule Poirot, and almost went unsolved except for an overheard passing remark in the street.one evening. Everyone it seems, has a motive for doing away with the despicable Lord Edgware and everyone has an alibi. Who did it? And how? I really liked this particular story. Just when I thought I had solved the case for M. Poirot--an unexpected discovery would throw me off track. It kept my interest throughout. A must read!

Published by Thriftbooks.com User , 11 years ago
product is in good condition; shipment was received within the estimated delivery period. i would buy from this seller again.
Copyright © 2020 Thriftbooks.com Terms of Use | Privacy Policy | Do Not Sell My Personal Information | Accessibility Statement
ThriftBooks® and the ThriftBooks® logo are registered trademarks of Thrift Books Global, LLC