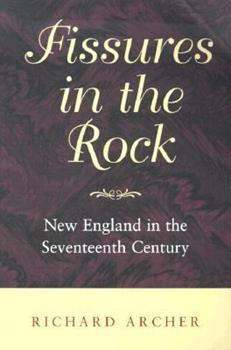 Fissures in the Rock

The ambitious goal of this book is to provide a new portrait of the social life and social structure of 17th-century New England. The resulting synthesis dismantles conventional presentations of a homogenous, Puritan New England in favor of one emphasizing difference, divergence, and even conflict over values and behavior. Richard Archer investigates the political history of power, the intellectual history of religious beliefs, the social history...

Published by Thriftbooks.com User , 21 years ago
I have just read Richard Archer's newly published "Fissures in the Rock: New England in the Seventeenth Century." This wonderfully informative and entertaining work details how the people of seventeenth century New England, while often differing from one another when viewed close in, were at the same time, in the larger sense, participants in a common culture.In this comprehensive and well-researched study, Professor Archer describes relations, often rocky, between the colonists and the native Americans; the spiritual, social, and political role of the colonists' religion; how women and men experienced, individually and together, their family life, along with their life cycles; what it was to trod the moral fringes of that society; how the culture functioned economically; and the several types of New England towns, which I found particularly enlightening.To illustrate these areas, the author gives us the lives, some darn good stories, of such colorful individuals as George Walton, Herodias Long, Robert Keayne, Ann Hutchinson, and John Cotton, to name a few.With a satisfying concluding chapter, extensive footnotes, bibliography, and appendixes, this work has something for everyone.When on a dare last December I read Morison's "The European Discovery of American: The Northern Voyages A.D. 500-1600" I felt another shoe waiting to drop. Well, here is that other shoe. I highly recommend that everyone try it on.
Trustpilot
Copyright © 2022 Thriftbooks.com Terms of Use | Privacy Policy | Do Not Sell or Share My Personal Information | Accessibility Statement
ThriftBooks® and the ThriftBooks® logo are registered trademarks of Thrift Books Global, LLC