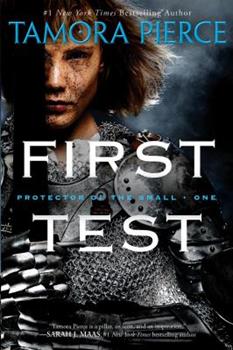 Kel will not allow this first test to be her last. Her adventure begins in the New York Times bestselling series from the fantasy author who is a legend herself: TAMORA PIERCE. Keladry of Mindelan is the first girl who dares to take advantage of a new rule in Tortall--one that allows females to train for knighthood. After years in the Yamani Islands, she knows that women can be warriors, and now that she's returned home, Kel is determined to achieve...

My all time favorite author

Published by Bambiispots , 7 months ago
Tamora pierce just has a way with creating strong female relatable characters. Despite having a similar set up as the Alanna series, Kel is a completely different character who sets out and develops as her own being. I adore these books, and I think they’re great for teens and adults alike to read.

Published by Thriftbooks.com User , 16 years ago
Keladry is a brave girl who it seems can withstand anything. She soon teaches the boys that she is not someone to be messed with. Soon she gains a chatter box friend named Nealan. She also becomes friends with a horse called Peachblossom. In fact Kel's whole year is an adventure. I'd recommend this book for ages 10 & up.

This is a wonderful book!!

Published by Thriftbooks.com User , 16 years ago
First of all, I'm a girl posting this review. I was in junior high when I first picked up this book and I haven't put it down. Kel is a spledid character and, in my opinion, the most believable in the Tortall series. She's quiet, thoughtful, energetic, and the only main character in the four series who doesn't have magic. In her stories, Kel represents the ordinary girl trying to accomplish something extraordinary. This one doesn't have the big adventure aspect to it, but make no mistake. With a strong cast of characters, friend and foe, this story is great. Each of the main supporting characters, such as Neal, Roald, Joren, and Wyldon, feel like real people and have a great depth about them. People of all ages trying to fit in with whatever will be able to relate to Kel and her struggles.

Published by Thriftbooks.com User , 16 years ago
This is an excellent book. It doesn't keep you on the edge of your seat, nor turning the pages like a maniac. But it *is* a book I hurried to return to after school. The Hero: After the passionate Alanna (of Ms Pierce's earlier series), Keladry seems quiet, stoic, even placid. But she's a unique personality, almost more three-dimensional than Alanna, more believable, more flawed, a wonderful contrast. Certainly, many children would relate to the kind of risk-taker that Alanna was (incidentally, a rewarding sequence or reads, available in most children's libraries), but easily as many would identify with the quietly determined Kel. I read with amusement what another reviewer had written: does this book make a convincing case for women as soldiers? Perhaps not. But is that the true goal of the book? I think it is more that all of us --women and men-- must take protection of the weak as a modern cause, just as it was in chivalric times. This means, in today's world, peace-keeping. And women police officers have earned our admiration for decades. This book looks at how things would have been different if a girl was allowed to become a knight, who felt strongly about protecting the weak. That's the whole point of "protector of the small." In spite of her tendency to keep her feelings bottled up, there is no lack of humor in young Kel; she cheerfully takes a nightly stroll around the halls to check up on whether the other young fellows are being bullied. You may call it vigilante justice, you may call it foolhardiness, but that describes who Keladry is: a very determined girl who's more interested in principles than mere survival. I think she makes a wonderful hero. And she does it with humor. Keladry's humor might be a little elusive to those who like to have such things blared at them, but it is there. It is there in the way she tilted at the quintain, despite being handed a weighted lance, to make a point for her master at arms and the practical jokers who set her up, in the way she deals with her eccentric horse, the patience with which she converses with her sparrows. All in all a delightful read, despite the low-key tone of the narrative. A highly believable main character. Archimedes

Published by Thriftbooks.com User , 18 years ago
Tamora Pierce has done it again. I never thought any book could be better than the Alanna Quartet, but this series proved me wrong. First Test, the first book in The Protector of the Small Quartet is about a girl who wants to become a knight. Keladry of Mindelan is put on probation her first year as a test for the training master, Lord Wyldon to decided if she should be able to continue on. This is the first test of many. The rest of the boys play tricks on Kel and try to chase her away. However, time and time again, Keladry proves that she is just as good and better than some of the boys under certain um, circumstances. Kel is a born leader. She saves the lives of her year mates and inevitably earns their respect, if not their friendship...Tamora Pierce will draw you into this book, making you feel like you're part of the scene too. Tamora brings back a few old characters as well as she introduces new ones. This is a great book!

Different from Alanna, but great anyway

Published by Thriftbooks.com User , 20 years ago
I originally thought that this series would be just a carbon copy of the Alanna books. Well, I was wrong. yes, there are similarities (Kel is good friends with the prince for instance), but on the whole, it is very different. While the problems Kel faces are similar to the one's Alanna faces, they are quite different. Instead of being as good as the boy pages while pretending to be a boy, Kel has to be as good as the boys right through everyone's sexist ideas. She is also very unfairly put on probation - and must prove herself extra so she will be able to stay to her seconed year.Kel's character is also very different from Alanna's and she finds different forms of fighting challenging. There is a different training master and training to be a knight is considereably different now than before. Several characters from previous books made short appearances - Daine, Numaire, Roaul and a little bit of Alanna in the beggining of the book. Although the book doesn't mention it, i do think that Kel may have wild magic - although I don't know why niether Daine or Numair mentioned it to her. I also would have liked Alanna to be in the book a little more - I really like her. Kel recieves a few anonymouse presents which I think are from Alanna because she was not permitted to talk to Kel. This does hint to the fact that Alanna will have more space in the books to come. The style of Pierce's writing has changed since Alanna - it's not better or worse, just different. Overall, a good book.I can't wait for Page to come out in paperback!
Copyright © 2020 Thriftbooks.com Terms of Use | Privacy Policy | Do Not Sell My Personal Information | Accessibility Statement
ThriftBooks® and the ThriftBooks® logo are registered trademarks of Thrift Books Global, LLC