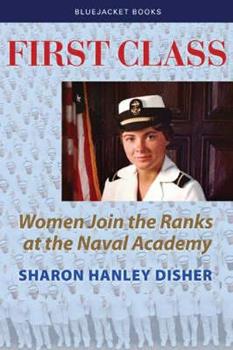 First Class: Women Join the Ranks at the Naval Academy

When Sharon Hanley Disher entered the U.S. Naval Academy with eighty other young women in 1976, she helped end a 131-year all-male tradition at Annapolis. Her entertaining and shocking account of the women's four-year effort to join the academy's elite fraternity and become commissioned naval officers is a valuable chronicle of the times, and her insights have been credited with helping us understand the challenges of integrating women into the military...

Published by Thriftbooks.com User , 19 years ago
As noted in the two previous reviews Lt. Disher served in the Civil Engineer Corp.I had the opportunity to work for her as a civilian employee during her tour as an Assistant Resident Officer In Charge of Construction at the Everett ROICC office during the initial construction of the Everett Hompeport, current home of the Abraham Lincoln Battle Group.At that time we were just starting to see female officers in construction managemant. It was one of the many fields that had been strictly male up until the time that she came on board.I was a GS-9 Construction QA and served as her eyes and ears in the field. She was the contracting officer and had final say on any changes to the projects we worked on and had final signature authority for any changes we made.It was surprising for a lot of the contractors to be working for a woman, in any capacity. It was more surprising for most of them that she was a quick study, learned their projects as fast as they did and was at least as sharp.I am about ten years older than her but that was common for me when working with Lieutenants. They tended to be kids in my eyes. I like to think that I had no preconceptions about working for a woman although I never had before.I always found Sharon to be totally professional. She would listen when she didn't know a subject but she never let the contractors get an edge on her. She had strong people skills and never had to rely on "cute". She was always an engineer and a naval officer. In short she was a professional.I recognize some of the stories in the book because they are ones she told when she shared an office with me.This book was a hard read for me because I knew how many of the experiences were hers.If you read this book be aware that while it states that the names are changed, it is often to protect the guilty, not the innocent. The acadamies are still a tough place for women to survive as we continue to see in the news.It has gotten better though, through the courage and efforts of officers like Sharon Disher, who had to be better than her counterparts to survive.I still consider her the best officer I worked for in 21 years of civil service.Respectfully,Terrence N. TallmanNaval Facilities Engineering Command

Published by Thriftbooks.com User , 22 years ago
Never having been to the Naval Academy, I was amazed at how they dealt with female classmates the first time around. This book gives you the day-to-day feeling of what it is like to be there and experience every order. I think that the author goes to great lengths to give you as much of the "hands on" feelings as is possible for each confronted situation. It is written in a diary set up, and covers obviously the most imp-ortant moments. I enjoyed the quick movement of the book, and the light airey handling of even the most embarrassing situations. These are real women confronted with an overwelming male oriented situation, along with a great number of men who have never had to deal with any women before. What happens is both funny, emotional and real. I would like to also deal a quick "good job" to the naval academy; who for all their formality, handled the first year with a minimum number of real complaints; and only a few real embarrassing or wrong decisions. I recommend this book for everyone interested in how a few determined women can stand up against tradition and the entire male student body of the academy, and still manage to graduate. My hats off to everyone in this case.

This book is an exact of what a USNA experience feels like.

Published by Thriftbooks.com User , 23 years ago
Being a 1998 graduate of the Naval Academy, I can completely relate to Mrs. Disher's views on this book. I have read it five times now and felt every emotion in the process. I am angered at the treatment and how it is still evolving. I am happy that there are women (like me) who laugh and keep a sane attitude on the Academy. I am also relieved that someone so qualified as Mrs. Disher wrote such a moving book for everyone, USNA grad and not, to benefit from. I have only been away from USNA for a little over a year now, and I can claim that everything that happened in this book either happened to me, or to a fellow midshipman that I graduated with. This book has been stereotyped as a "feminist" book, but this book is about the United States Naval Academy. I liked this book so much, my sister read it (USNA, class of 2000). In fact, I believe in this book so much, my face is on the front cover. To all those that doubt the power of women and men getting along to succeed in defense of this country...you need to read this book and understand that only through adversity comes strength. Thank you, Mrs. Disher, for being courageous and coming forward with your tales.

A landmark book covering a landmark period at the Academy.

Published by Thriftbooks.com User , 24 years ago
"First Class" portrays the struggles of the individual and the institution accurately and openly for the first time. As a male classmate of Ms. Disher's, I was both moved and shocked by the incidents in the book. Although it occured all around me, it is surprising how oblivious we can be to the trials of our neighbors, and our classmates. Thanks for a wonderful book.

This book spreads knowledge in a great story/factual way.

Published by Thriftbooks.com User , 24 years ago
I didn't get a chance to read all of it, but the parts I did read were very intriguing. Since I am a female midshipman I could relate to a lot of what the story talks about. I think that even if I had not been a midshipman, I would read this book because it is interesting.
Trustpilot
Copyright © 2022 Thriftbooks.com Terms of Use | Privacy Policy | Do Not Sell or Share My Personal Information | Accessibility Statement
ThriftBooks® and the ThriftBooks® logo are registered trademarks of Thrift Books Global, LLC