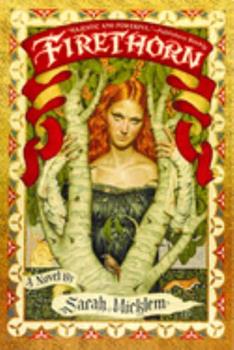 (Book #1 in the Firethorn Series)

Introducing a mesmerizing debut in the rich tradition of Marion Zimmer Bradley-a passionate tale of love and war, honor and vengeance, in which the gods grant a common girl uncommon gifts... Before she was Firethorn, she was Luck, named for her red hair, favored by the goddess of Chance. A lowborn orphan, Luck is destined to a life of servitude. But when her mistress dies, Luck flees to the forest. There she discovers the sacred firethorn tree, whose...

Published by Thriftbooks.com User , 14 years ago
This book is awesome! I bought it for the cover, but I've read it several times because what's behind the cover is even better. It's a feminist book about a strong woman refusing to be shoved into a role she doesn't want. It's hard and it doesn't always work. She wants to love and be loved, and it's not a world that makes much room for that. She wants to make her own decisions and live her own life, and there's not a lot of room for that either. But she uses her experiences and her personality to make herself a place, and I found the successes she has in the face of all the difficulties to be inspiring, however small and laborious they were. I was also really interested in the religious structure of the society. It is never made clear in the book whether the gods of this society are real and influential, or whether Firethorn's sense of their presence and actions is merely the promptings of her subconsious, and I found that interplay fascinating to think about. Other reviews talk a lot about how much sex there is. There is sex in this book, less romanticized sighs and moans and more matter-of-fact depictions of lust and passion in an imperfect relationship. I found the sex pretty relevant, since she's someone's mistress. It's a fact of her life. Other reviews also talked a lot about violence - again, there is violence in this book, and I don't know how you could avoid the discussion of it, especially since Firethorn's lover is in the army, and their religion has sacrifice as one of its central tenets. I've read books with a lot more sex and a lot more violence, and with less relevance for either. That also seems sideline to the central focus of the book, which is about a very interesting girl finding a life and a home in a warlike feudal society that doesn't really want her.

Published by Thriftbooks.com User , 17 years ago
When rating a book, several points must be taken into consideration: Style, Character Strength, and Story. "Firethorn" displays excellent ability in all three aspects. The writing style is real and personal, allowing the reader closer contact with the main character than most books can hope to achieve. Nor do the characters alienate the reader by becoming superficial or idealized. They remain believable personalities throughout the tale. Lastly, the story itself is intriguing, never proposing to set the characters on an impossible quest that can only be completed against terrible odds--instead it is driven by personality and "Fate" and those things which are simply in the control of lieges. Whatever magic is present, whether alien or known to the reader, is presented so honestly from the character's view that the reader cannot help but accept it as a reality of that world. For such exceptional storytelling, the author deserves a 5. For capturing my imagination and leaving me waiting for more, I give the author another 5.

Published by Thriftbooks.com User , 17 years ago
Micklem writes beautifully about the ugly little secret that lies hidden within most fantasy novels: that the unequal distribution of power which occurs between men and women, different social classes, the physically attractive and the disfigured or merely average-looking, does not usually lead to an outbreak of nobless oblige. Nor does it lead to automatic exploitation. What "Firethorn" does is acknowledge that love is rarely pure, that it is easier to hurt those we love than those we hate, that if you have power it is easy to treat those who don't have power as if they are not quite human. I don't want to assign a writer's gender more importance than it is due, but I truly think this is a book that could only have been written by a woman. This is an excellent debut, and I look forward eagerly to reading more of Micklem's work.

Published by Thriftbooks.com User , 17 years ago
I don't normally read fantasy books. I picked it up in the bookstore thinking my nephew might like it as he has read the LOTR books, all the Harry Potters, just recently finished Eragon and is now reading the Otori series (by Lian Hearn). However as I began reading it in the book store I became engrossed. I bought it and continued reading it when I got home, staying up until 2am. It's been a long time since I've read a book this good. The writing is first rate. This author knows how to weave a tale and she does not skip corners. All of her characters have depth, even the lesser ones. The best thing is the two main characters are not perfect. They have flaws. This meant I never knew what might happen, nothing was predictable. This is the first in a trilogy. I am looking forward to the 2nd book.

Published by Thriftbooks.com User , 17 years ago
Loved this book! Read it in a day and a half since the storyline was so compelling. I am awaiting the second book with high anticipation. If you liked R.R. Martins' Fire and Ice series this is right up your alley.
Trustpilot
Copyright © 2022 Thriftbooks.com Terms of Use | Privacy Policy | Do Not Sell My Personal Information | Accessibility Statement
ThriftBooks® and the ThriftBooks® logo are registered trademarks of Thrift Books Global, LLC